New Sambo rules, World Championship prize, only one annual Sambo World Cup and other news from the meeting of the Executive Committee of International Sambo Federation in Bulgaria 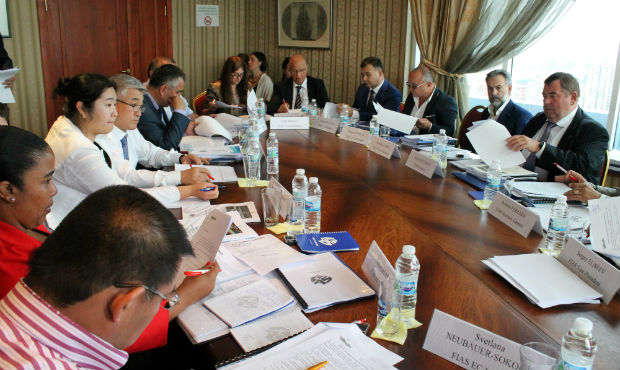 The meeting of the Executive Committee of International Sambo Federation (FIAS) held on September 5 continued the official part of Sambo World Cup in Burgas after a press conference. The meeting was opened by FIAS President Vasily Shestakov. He noted great progress in relations with many international sports organizations, particularly, successful interaction of FIAS with the International University Sports Federation (FISU).

Head of FIAS thanked President of Korea Sambo Federation Chong-Keum Moon for his huge efforts made to include sambo in the program of the International Summer Universiade in Gwangju. “Currently, the leaders of FISU resolve whether sambo is included in the program as main sports or as a show. FIAS continues its collaboration with SportAccord, carries out negotiations to have combat sambo back in the program of III World Combat Games 2015 of SportAccord.”

FIAS has stable relationship with President of the Association of National Olympic Committees (ANOC) and Sheikh Ahmad Al-Fahad Al-Sabah, Head of the Olympic Council of Asia. “We thank President of the Sambo Union of Asia Alamzhon Mullaev for his great efforts to this end. The result is that his organization entered the Sambo Union of Asia as a full member this year. Sambo is included in the program of the Asian Beach Games to be held in November this year in Phuket (Thailand) and the Asian Indoor-Martial Arts Games 2017 to be held in Ashgabat (Turkmenistan). Fruitful collaboration with the International World Game Association (IWGA) continues, and we hope that soon our negotiations as to include sambo in the program of the World Games will be successfully finished,” Vasily Shestakov says.

These days FIAS in cooperation with the Sambo Federation of Canada holds competitions in Richmond (Canada) within the framework of the Association for International Sport for All (TAFISA). “At these prestigious games, the International Sambo Federation is represented by an exhibition performance of sambo athletes and an exhibit booth that represents sambo and FIAS at the exhibition during the Games,” President of FIAS tells.

“Currently, we have a cooperation agreement with FILA and its President Nenad Lalovic who promised personal support to FIAS in its work relating to recognition of sambo by IOC. Recently, we have entered into a cooperation agreement with the International Judo Federation, and its President Marius Vizer supported sambo and FIAS in our efforts for recognition by IOC. Now we’ve created almost all conditions for our dream (recognition of sambo by IOC) to come true. We had just one problem relating to the suit of the former Pan-American Federation. I am glad to say that today we received an official response from CAS: we have won this case eliminating the last obstacle that prevented our cooperation with IOC. I would like to thank you, all of you, who work with the NSF contributing to development of our sambo and making it stronger”, President of FIAS Vasily Shestakov says in the end his speech.

"Now we’ve created almost all conditions for our dream (recognition of sambo by IOC) to come true".

The Sports Director of FIAS Dmitry Maksimov submitted to the members of the Executive Committee for consideration updated anti-doping provisions of FIAS that cover the matters relating to collaboration of FIAS and VADA and compliance with the code of the VADA and technical aspects to the extent of violations and investigation. Vasily Shestakov also drew attention of the members of the Executive Committee to the fact that this year VADA admitted that efforts made by FIAS to combat doping were positive and noted that FIAS was one of the most successful federations in the world in terms of compliance with all VADA regulations.

The Executive Committee also gave a hearing to the report of the General Secretary of FIAS Roberto Ferraris on FIAS application submitted to IOC. By now, it has been updated and sent to the International Olympic Committee. The leaders of FIAS closely cooperate with sports director of IOC and make all efforts to provide all necessary comments and updates to the International Olympic Committee directly in a timely manner.

"In 2015, the Pan-American Games will be held in Canada. I am going to carry out a range of negotiations to include sambo in the program of these prestigious Games and plan to visit this important Pan-American tournament".

The Executive Committee of FIAS adopted its strategic development plan for 2014–2017 that will help sambo athletes to develop in a proper way. This plan is adopted as a basis and it will be elaborated and amended so that to ensure development of sambo in accordance with the world sports movement trends.

Also new rules of sambo competitions were adopted at the meeting of the Executive Committee of FIAS. President of the European Sambo Federation Sergey Eliseev reported, “The rules of sambo competitions are now updated keeping up with the times. What about our new and specific propositions? We add a teenager’s age group (13–14 years old) and their weight categories; we reduce time up to 2 minutes to provide medical aid (previously it was 3 minutes). This is necessary to make the fight quicker and more spectacular. The time of consolidation rounds is also reduced up to 3 minutes, which allows us to reduce the duration of sambo competitions. We unify sambo shoes: red or blue or combined (red and blue).

"The rules of sambo competitions are now updated keeping up with the times".

We also change carpets size, the new size is adopted: 11 x 11m. This is an optimal size allowing sambo to be accepted by greater number of sports halls. We used to fight on 12 x 12m carpets, these still can be used. We change clause on a gap in points to determine a winner, now it is 8 points, previously it was 12. Therefore, we optimize and make the fight quicker. These rules will be adopted since January 1, 2015, as experimental for one year, and thereafter, we will summarize the results, make necessary corrections, and approve them for 4 years.”

The Executive Committee also voted for the new regulations of FIAS competitions amended in accordance with the new developed regulations.

The Executive Committee adopted a document on sportsmen attestation. Sergey Eliseev commented why this document is needed by FIAS, “Sportsmen attestation has not been previously developed by our sambo movement. This document is to be considered and approved today. We have to assess qualification of each sambo athlete who wears the jacket to understand what his current development status is.”

"We have to assess qualification of each sambo athlete who wears the jacket to understand what his current development status is".

First Vice-President of FIAS Andrey Klyamko reported on the budget of FIAS detailing which amounts were spent by FIAS on sportsmen’s equipment and NSF arbiters, purchase of carpets for NSF, payment for tickets, and financial aid to carry out of the events provided by FIAS official sports calendar.

Sergey Eliseev reported on the peculiarities of the sports calendar 2015, “World Cup in Casablanca (Morocco), Junior World Cup that initially was planned for the USA, but will be transferred to Riga (Latvia) due to organizational issues. Also only one World Cup is proposed from 2015 instead of four stages. The format will be as follows: personal tournament for 2 days and team tournament for 1 day. Previous World Cups will retain their names, but their status will be changed to A-category tournaments. The first tournament like this will be held in Moscow as, after having analyzed the statistics, we have found out that Memorial A. Kharlampiev Super Cup is the most popular. The prize money fund that has previously been awarded based on the results of four stages of the World Cup now will be awarded at the World Sambo Championship.”

"Also only one World Cup is proposed from 2015 instead of four stages".

It was also approved that the Master World Cup will be held in 2015 in Israel.

The meeting of FIAS Executive Committee was closed after the calendar for 2015 was discussed and a decision that there would be only one World Cup in the future was made. Tomorrow Sambo World Cup starts, which will be referred to A-category international tournament next year. Therefore, be ready for the online translation of the tournament at 10.00 am (Bulgarian time at FIAS official website) or in Mladost Sports Hall (Burgas).