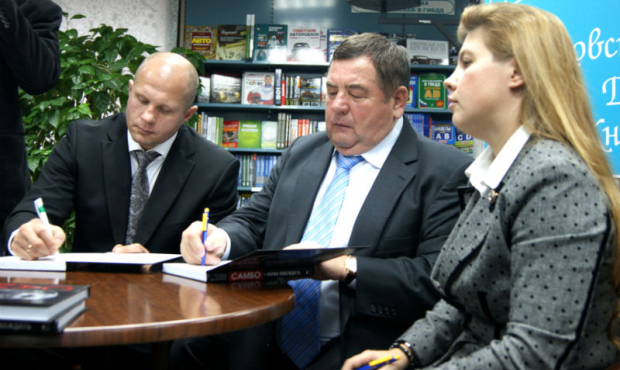 The presentation of the book “SAMBO is a Science of Winning” that was held last week in Moscow House of Book (Moscow, Russia) became one of the most numerous and productive in the history of the House of Book. In the on-the-spot news report our site already cited authors of the book Mr. Vasily Shestakov, Ms. Svetlana Eregina and Mr. Fedor Emelianenko. But the meeting with readers and journalists was so rich in talks on different topics that it was impossible to place it within one article. Today we present you authors’ statements about the intellectual development of women practicing sambo, re-education of troubled teenagers, absence of aggression in SAMBO and many, many other things.

Vasily Shestakov: SAMBO is the most humane sport of all kinds of martial arts. It is intended to protect the weak, close people, friends. What is more, SAMBO is a big family which joins people by common goals and interests. Every athlete practicing this combat has an implied desire to become a world champion and he is doing everything to reach this. SAMBO is also a team competition where everyone supports each other. This also shows the family unit.

Svetlana Eregina: Earlier it was very popular with the girls to realize themselves in different spheres. Someone was singing, someone was drawing, someone was dancing ... Well, and someone wanted to be a strong person. Therefore, both then and now, many girls are interested in sports to become a harmonically developed person and be able to make decisions in critical situations, as well as think a few steps forward. The most important what practicing SAMBO gave me is diligence. Sport teaches to work and strive for the result as much as nothing else.

When I was employed in high school we carried out a test among students. And the level of intellectual development was higher in the girls who actively practiced combat sports. I therefore urge all girls to choose practicing SAMBO not only as a means of sports perfection, but as a way of personal development.

Vasily Shestakov: I write my Candidate's dissertation and studied statistics on traumas in sports. It turned out that SAMBO is at the end of the second ten. The first positions are occupied by playing sports - football, hockey and others. Before a sambo practicioner starts to participate in competitions, he is obligatory taught to fall safely, throw properly, tuck timely. So when he goes out on the floor, serious injuries are minimized.

Vasily Shestakov: Despite its growing popularity around the world, athletic SAMBO is unlikely to be able to gather football stadiums of spectators. But we have a perfect example - Fedor Emelianenko. During his combats huge halls are full of people. Therefore, I think that separate SAMBO characters, separate individuals that have become idols and national heroes will be able to gather even stadiums. I recently attended Fedor’s combat in St. Petersburg in a huge ice palace - it was overcrowded with fans.

Fedor Emelianenko: I have already finished my sports career, and will not participate in the upcoming SAMBO World Championship in Minsk. I am currently working with the Ministry of Sports of Russia as adviser to the Minister Vitaly Leontyevich Mutko. And, hopefully, I will be useful for the development of our sport on my new position. For example, currently negotiations are being held with my participation on construction of a large sports center for martial arts in Russia.

About translating the book

Vasily Shestakov: Our book “SAMBO is a Science of Winning” has already become popular in Russia. We expect that it will become popular all over the world. In the near future we will negotiate about the translation of the book into English. I think in six months this edition will appear.

Fedor Emelianenko: Honestly speaking, writing is not really my cup of tea. Here is a big merit of Svetlana Eregina. I gave the information and she filtered it, removed word-parasites, and turned it all into a book, which you can already see.

Fedor Emelianenko: A child who comes to train in a gym needs to be told from the very first session that we have no aggression, but an honest sport. I believe that any sport in the first place removes aggression. My daughter used to put all the house upside down in the evenings. Now we have sent her to a section, and she applies her energy there.

As for the age at which to start, it’s all individual. I began to practice at 11, I know examples of athletes who came to the sport in 18-20 years, and achieved good results. But in general, most of the guys who compete at a high level today, started at a fairly young age.

When I performed in Japan, there were spectators with babies in their arms, which was a big shock for me. By the way, my daughter was very disappointed when she knew that I will compete any more. She is 4 years old, but she is very concerned about this issue. Everyone decides for himself at what age to start, but on the whole a child should be brought up so that he could stand up for himself, for his family.

Vasily Shestakov: I believe that children should be sent to such types of martial arts from the age of 9 years, when they realize what they are doing. At 5 years swimming, gymnastics are better, so that they prepare themselves for combat sections.

In fact, the fight takes off aggression. When I was with teaching difficult teenagers, they came from the street, police brought them to me, and it always ended up so that they never returned to the streets. It was interesting for them in the hall.

By the way, street fighters become very interesting athletes, because they already have character, endurance and even some combat skills. If one works properly with them, they become very decent people. There is a great number of examples where guys were rescued from the streets through sports.

Svetlana Eregina: As a professional teacher, I can say that raising a child in the family should be bilateral. Neither father’s, nor mother's point of view should prevail. At that, a boy should have a set of masculine qualities, a girl – feminine ones.

Man has vital motor skills: running, walking, swimming. A combats form a skill of safe falling. So many injuries and accidents occur only due to the fact that a person cannot fall safely! Therefore when children start practicing SAMBO, they first form the skill of safe falling. It stays with them for the whole life and helps them in the most difficult situations, even if they do not become professional athletes.

Naturally, it is most logical to start practicing SAMBO at the age of 9-10 years, because sports program is designed for this level. Besides it is not recommended to combine the beginning of training and first classes at school. Because there appears a new regime, and training is also a serious regime. Facing two modes leads to an overload of the little athlete’s body.

Fedor Emelianenko: I love reading spiritual literature and the classics. Among contemporary works I really liked the book “Unsanctified Saints” by Archimandrite Tikhon. Now I want to read “Cursed Days” by Ivan Bunin and “The Sun of the Dead” by Ivan Shmelev. I like books that make you think. Some people say, “I read not for any feelings, just for the sake of pleasant pastime.” Then they close the book and forget it. It is unacceptable for me.

You can buy the book “SAMBO is a Science of Winning” in the branches of the Moscow House of Book or order it via Internet: ORDER THE BOOK.