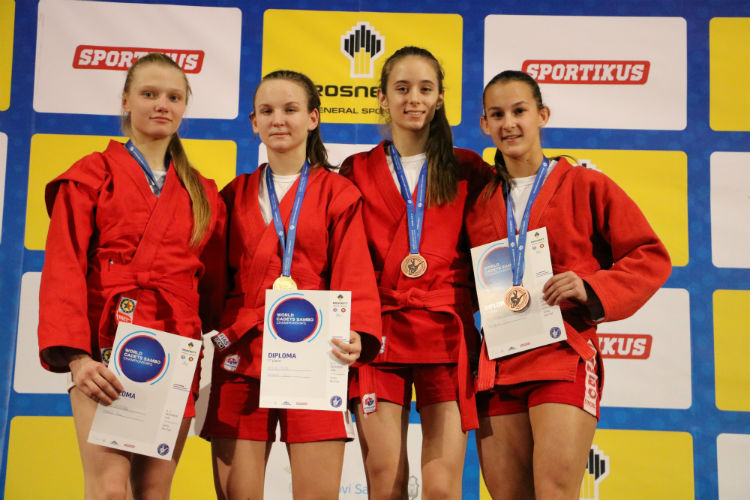 The first day of the World Cadets SAMBO Championships held in Novi Sad, Serbia, on December 4 is over. On this day, the athletes competed for 5 sets of medals among girls and 5 sets of medals among boys. The medal winners of the tournament shared their emotions and impressions in their interviews to the FIAS website. General sponsor of the tournament is Rosneft oil company.

Janis Edgars STRAUSS (Latvia), a bronze medal winner in the up to 50 kg weight category among male cadets: 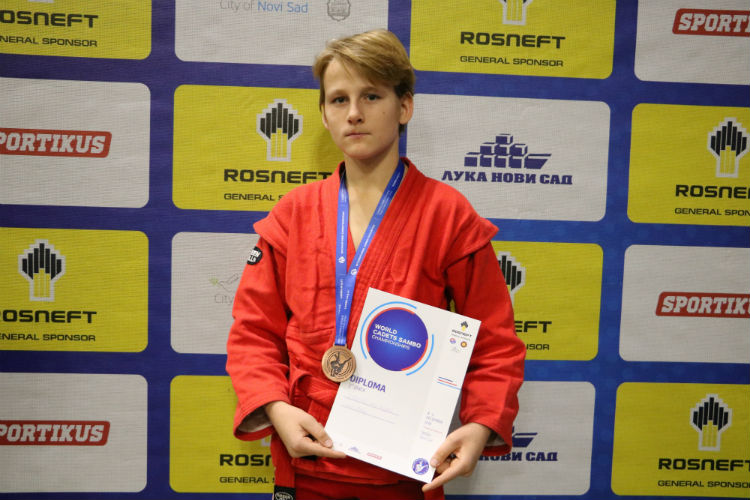 - My pathway to the bronze medal was pretty complicated, and this is owing not only to the high technical plane of athletes, but also to my past experience in sports. The fact is that I had been engaged in judo for 11 years, and I came to SAMBO quite recently, so it was still difficult to readjust myself to it, as SAMBO features a larger variety of technical capabilities for performing moves and throws. Therefore, this bronze is a fairly good result to me, for this is my first award of such level.

Lana MRDALJ (Serbia), a bronze medal winner in the up to 52 kg weight category among female cadets: 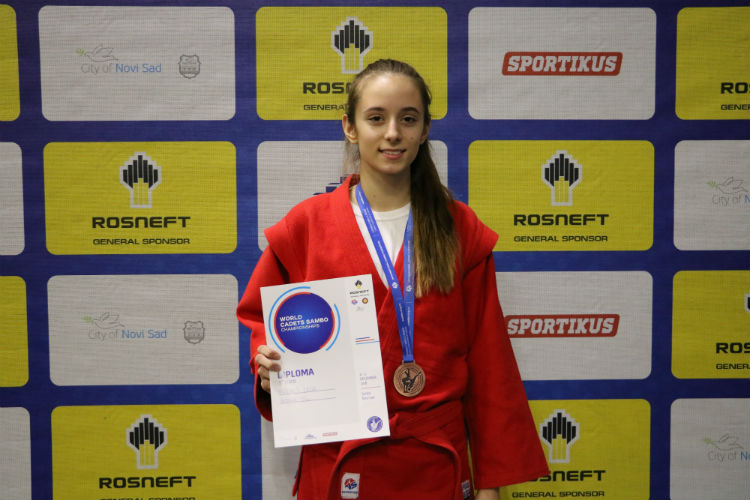 - I am incredibly happy that I've been able to score such a result. This is my first international SAMBO tournament of such level, and I consider my debut to turn out quite successful. I managed to win over my opponents from Romania and Kazakhstan, but then I lost to a sambist from Ukraine. They say it is easier to win at home, but personally I don't see any fundamental difference in where to fight, be it Serbia or any other country.

I'm engaged both in SAMBO and judo, and both kinds of martial arts appeal to me. I want to stress that in addition to certain differences in technique, they also have an important distinction in uniform. In SAMBO, I ought to perform in shorts, yet it seems to me that my legs look too thin. But from athletic viewpoint, SAMBO allows for a larger variety of techniques, that's why I've come to love this sport.

As I learned, the International SAMBO Federation has recently got provisional recognition by the IOC. I think this is a huge step forward, because SAMBO is a great, dynamic kind of sport. Why should it not become Olympic, then? Who knows, maybe in ten years’ time I would be able to compete in a SAMBO tournament within the program of the Olympic Games. That would be great.

Narek AMIRYAN (Armenia), a silver medal winner in the up to 60 kg weight category among male cadets. 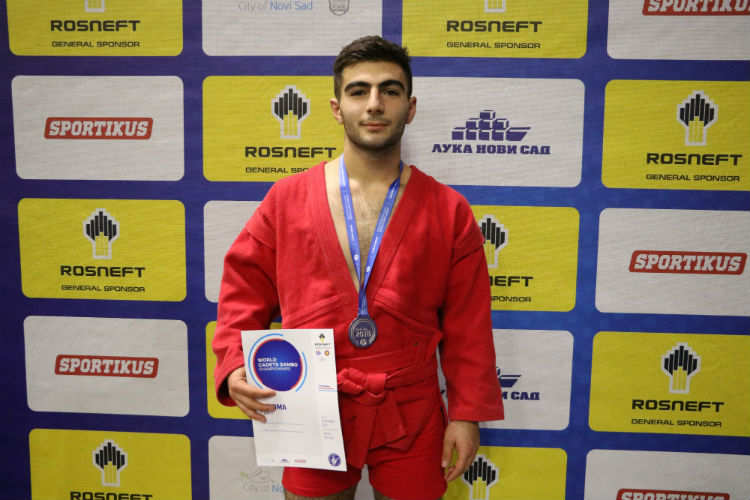 - I lost my final combat on points, because during the fight my opponent knocked the wind out of me. Of course, the second place is a medal, too, yet I cannot say that I am totally satisfied with it, as I was longing for more. But still, there's progress, as I've scored only the fifth at the Youth Championships in Tbilisi earlier this year.

I am very pleased with the news regarding the SAMBO's provisional recognition by the International Olympic Committee. I think this is a very important and significant event. Now, I will practice even harder, to have a chance to secure a berth at the Olympics in future.

Lavinia IONESCU (Romania), a bronze medal winner in the up to 70 kg weight category among female cadets. 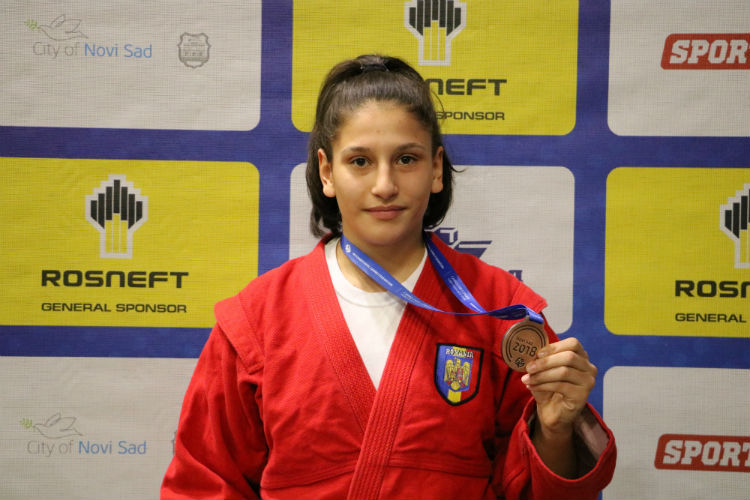 - I am completely dissatisfied with my performance at the tournament, because I am sure that I should have been in the finals. I've no idea as to what has happened to me, I haven't fulfilled my coaching guidelines, and I lost. I'm very disappointed.

As a matter of fact, I`ve been going in for SAMBO since I was 5, when my parents brought me and my cousin Codrina Ionescu to the sports club. She has already achieved a lot in the international SAMBO arena, and she is always eager to share some tips and bits with me. I know that I still have a lot to do, in order to win the gold at various tournaments. And I hope that in the light of the latest news, I would be able to compete for the Olympic gold in SAMBO before long.

Daryna SEMIANIUK (Belarus), a gold medal winner in the up to 60 kg weight category among female cadets. 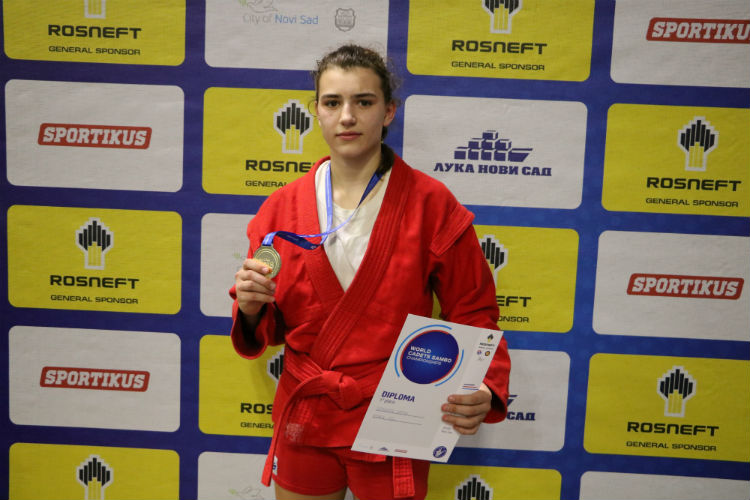 - Today I am truly happy, since I've been working my way towards this award for a long time. I trained a lot and achieved what I was aspiring to. This is my first award of such level. I had never met any of my opponents on my way to the gold medal before. This fact, perhaps, makes this victory even more dear to me.

Ihtiandru FEDCO (Moldova), a silver medal winner in the up to 84 kg weight category among male cadets. 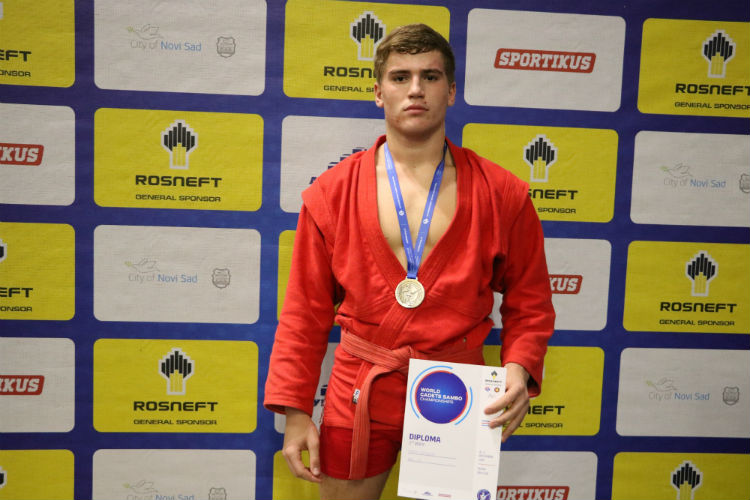 - I regard my silver medal as a great success, really, as this is the first time that I've taken the second place at the World SAMBO Championships among cadets. Earlier, I was fighting only at the Youth Championships, and my highest achievement so far was the third place at the European Youth Championships in the Czech Republic. I started practicing SAMBO in Russia, with my coach, Yuri Yemelyanovich Ganchuk. Then it happened so that now, for the time being, I'm living and studying in Moldova, and performing for this country, too. However, in the near future I plan to go back to study in Russia and try to get into the Russian national SAMBO team. The competition, of course, is serious, but I've got the strength.

I was delighted at the news that FIAS had got provisional recognition by the IOC. Previously, the World Championships had been the highest peak in SAMBO, but now we are all looking forward to getting into the program of the Olympic Games. I believe I have every chance to compete at the Olympics as a sambist.

Aleksandr KANATCHIKOV (Russia), a gold medal winner in the up to 84 kg weight category among male cadets. 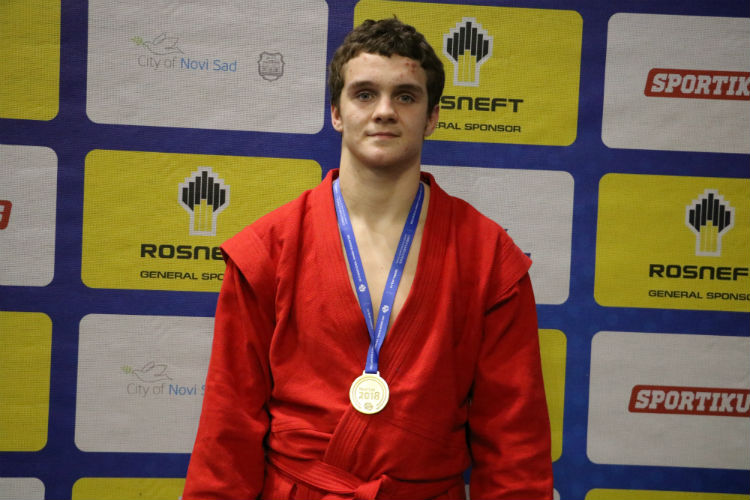 - Today, the Russian national team won five medals in the men's standings, while my finals happened to be the last ones. And as I was coming onto the mat, I realized that I simply could not let my team down, that I had no such right.

And I really managed to defeat the Moldavian athlete ahead of time, having made two throws. This win resulted not only from the correct application of techniques, but also from the tactics chosen for the combat, which was to keep a lower profile, in order to lead the fight into par terre. Finally, I was able to perform a hold, which opened up opportunities to use my signature techniques.

On my path to the finals, I had succeeded in defeating athletes from Belarus and Kazakhstan by submission, and a Ukrainian athlete by warnings. So I'm in my perfect mood now, it is particularly gratifying that our victories have fallen on the 80th Anniversary of SAMBO.

I am very pleased at the news from Tokyo regarding the SAMBO's provisional recognition by the International Olympic Committee. For me, and for the majority of sambists, I believe, this is a new opportunity, a new dream, new goals, a new motivation to stay in this sport as long as possible.

Provisional recognition is a big step forward that opens up an opportunity for SAMBO to get into the program of the Olympic Games. But I am pretty sure that even now, in the very nearest future, there will be an influx of new athletes to SAMBO from related sports, such as judo and, probably, even from freestyle wrestling. So that our large SAMBO family would keep on growing. And this would be really great!