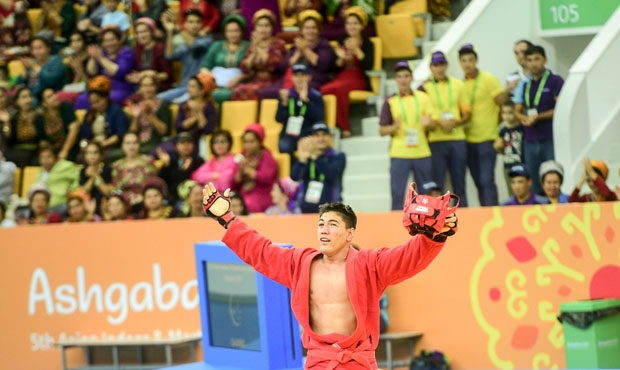 Kerimberdi DOVLETOV (Turkmenistan), winner in the under 62 kgs weight category among men in combat SAMBO

– No wonder it was difficult to win, this was the finals. Comparing to the Asian Championships, when I also won the gold medal, I can say that here, at the Asian Games, it was even more difficult. I guess not because of the opponents’ level of technical skills, but rather because of the number of fights. My way to the medal in Ashgabat turned out to be a longer one. But it makes the victory even sweeter, doesn’t it? And I can safely say now that my dream has come true.

Gulnur YERBOLOVA (Kazakhstan), silver medallist in the under 52 kgs weight category among women:

– A silver medal is rather a consolation prize for me, because I really expected it to win a gold medal. A small flaw in my technique prevented me from winning the fight. There are also some shortcomings I have to deal with through sharpening my skills and techniques. To be honest, I`ve lost not because I made a mistake or took unnecessary risks, but because my opponent was actually stronger. However, I’m not upset, because the Asian Games are a milestone on the way to the World Championships in Sochi. So, from now on, all I have to think about is the World Championships.

Irina KULAKOVA (Uzbekistan), bronze medallist in the under 64 kgs weight category among women:

On my way to the finals, I had to face an experienced sportswoman – a multiple Asian champion, she was also silver medallist at the World Championships in Sofia. However, this is not an excuse. I lost and I have some things to work on. The Asian Games for the most part are yet another test of strength and skill. This is a kind of a “dress-rehearsal” before the World Championships. Now I have a better understanding of flaws in my technique and shortcomings I have to overcome. I am working on it.

– I take my bronze as a defeat. I have won the Asian Games a number of times and have become the World Championships bronze medallist as well.  Frankly, I was a bit confused, because I did not know anything about my opponent from Turkmenistan. I haven’t fought him before, I haven’t seen him fighting as well. This must be the very reason of my loss on points.

[Photogallery] SAMBO at the Asian Indoor and Martial Arts Games. Day 2 (Ashgabad, Turkmenistan)
Tags:
Share
News on the topic
Blog
Recent photos
Latest news
Recent videos
Latest news
Follow latest news You are subscribed!
Thank you! Your confirmation email has been sent to your email.
This website uses cookies to ensure you get the best experience on our website More info Got it!