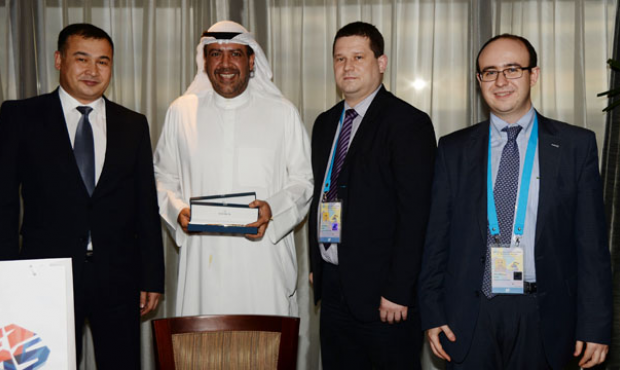 A meeting of the Olympic Council of Asia (OCA) Executive Board took place yesterday at the 32nd General Assembly of the OCA, which is currently underway in Manila, the capital of the Philippines. One of the matters discussed concerned sambo – the Sambo Union of Asia was recognised by the OCA Executive Board, and sambo became one of the 85 sports supported by the OCA. Until today the combat sports on this list included wushu, wrestling, taekwondo, sumo, muay thai, belt wrestling, kurash, judo, jujitsu and kickboxing. And now sambo has joined them. But that was not the only victory for our sport in Manila: the OCA Executive Board also decided to include sambo in the Asian Games. The decisions of the OCA Executive Board were ratified today at the session of the General Assembly in Manila.

The Olympic Council of Asia is the continental association of 45 national Olympic committees in Asia which supports and regulates the development of sport on the Asian continent. The OCA was founded in 1949, and in 1982 it was recognised by the IOC. It is headed by Sheikh Ahmad Al-Fahad Al-Sabah, who is also President of the Association of National Olympic Committees and a member of the IOC. The OCA’s headquarters is in Kuwait. Five major multisport events are held on the Asian continent under the patronage of the OCA: the Asian Games, the Indoor and Martial Arts Games, the Youth Games, the Beach Games and the Winter Games.

The main objective of the OCA is to develop sport, culture and education of Asian youth, and also to promote human values such as respect, friendship and goodwill through sport. The fact that sambo, which has significant potential for building harmonious personal development in today’s world, now ranks among the sports supported by the OCA is a great achievement for Asian and international sambo.

“We are all very familiar with sambo and the popularity which it is gaining on our continent, especially in Central Asia".

Sheikh Ahmad Al-Fahad Al-Sabah said at the OCA Executive Board session: “We are all very familiar with sambo and the popularity which it is gaining on our continent, especially in Central Asia. I therefore believe it is appropriate to consider today the question of recognising the Sambo Union of Asia and the sport of sambo, and also to take a decision to include sambo in the programme for the Asian Games.”

“For us this is a historic event".

Alamzhon Mullayev, President of the Sambo Union of Asia, has this to say about this breakthrough for sambo: “For us this is a historic event. This recognition, which we’ve been waiting for for a very long time, will give an additional boost to the development of our sport on the continent. I’m sure that the positive benefits that sambo devotees in Asia will get from this Olympic recognition – and especially the additional government finance and support – will be a source of inspiration and strength for all Asian sambo wrestlers, and today’s decision by the OCA will be an important milestone in the development of sambo on our continent.”

The sports departments of the Sambo Union of Asia and the International Sambo Federation (FIAS) now have organisational work to do with the OCA’s Asian Games Department and the relevant organisational committee to specify and define the weight categories and disciplines in which the competitors will represent sambo at this multisport forum.

"The inclusion of sambo in the programme for sports events like this is exactly what we’re trying to achieve and working on".

FIAS Executive Director Sergei Tabakov explained the prospects for Asian sambo in the light of its new competitive opportunities: “One objective of FIAS is to expand its sphere of influence, and the inclusion of sambo in the programme for sports events like this is exactly what we’re trying to achieve and working on. The Asian continent, which is renowned for its wrestling traditions, is currently very successful in developing sambo. The decision to include our sport in the programme for the games is yet another confirmation of this, and of course a good opportunity for us to move forward in improving the organisational and marketing elements of FIAS’s work.”

“For the International Sambo Federation this represents a major success and recognition that the development path we have chosen is the right one".

FIAS President Vasily Shestakov had this to say about the OCA Executive Board’s decision: “For the International Sambo Federation this represents a major success and recognition that the development path we have chosen is the right one. It is especially pleasing that this decision has been taken this year, when the main sambo events will be taking place in Asia: the World Championships in Japan, and the Junior World Championships in South Korea. Asian sambo is developing rapidly, and today the decision by the OCA General Assembly has given us additional opportunities to multiply this success. In my view, this breakthrough should inspire us to new achievements and victories.”

"The first medal in the sambo tournament at the Asian Games will be presented by me.”

A working meeting between OCA President Sheikh Ahmad Al-Fahad Al-Sabah and Alamzhon Mullayev, President of the Sambo Union of Asia, Michal Buchel, head of the FIAS office in Lausanne, and Artur Melikyan, legal adviser to the President of FIAS, also took place yesterday after the OCA Executive Board session. The OCA President said: “I am convinced that today’s event is the first step in developing the relationship between FIAS, the Sambo Union of Asia and the OCA. I am sure that at the Olympic Games in Sochi FIAS President Vasily Shestakov and I will discuss the development of sambo in Asia and map out areas of future cooperation. I can promise that the first medal in the sambo tournament at the Asian Games will be presented by me.”