Olympic Support for the Columbian SAMBO 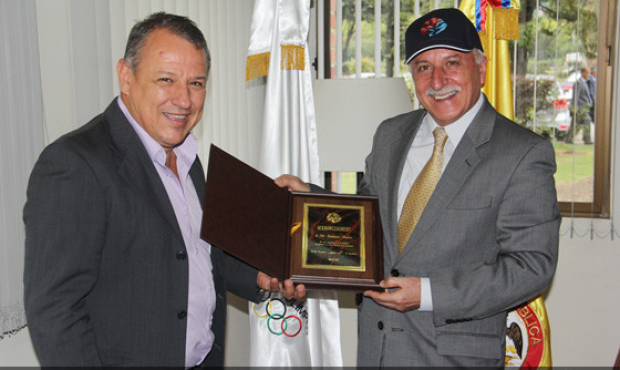 The thing that every day SAMBO around the world step by step goes along the road leading to the Olympic family is known to a great many of people today. The thing that this distance is being reduced due to a responsive motion on the part of representatives of the Olympic community is also the established fact. A demonstrative example of cooperation of the National SAMBO Federation and National Olympic Committee can be seen in Columbia, where Baltazar Medina, Head of the NOC, has recently been awarded for his contribution to the development of SAMBO.

The World Games in Cali, which took place in early August, were the official reason for the festive occasion. In large part, it is Baltazar Medina’s merit that SAMBO was represented in this event as a demonstration sport. The NOC President of Columbia did his best to give the Columbian and foreign sports fans the opportunity to see SAMBO competitions alive.

Of course, such an interaction is only beneficial to SAMBO and world sport as a whole. Omar Lopera, the President of the Columbian SAMBO Federation, warmly thanked Baltazar Medina, Head of the NOC, and handed him a memorial plaque on behalf of the FIAS and the National SAMBO Federation as well as presented him with tokens. Mr. Medina thanked his good friend Omar Lopera and particularly noted the gifts – a red t-shirt and tie of the FIAS. The fact that the flags of the political party, which the President of the NOC of Columbia is a member of, is also red.

– Baltazar and I are old friends. Previously, he called me friendlily Loperita, but for some time he has greeted me only as follows: “Hello, SAMBO!” – Omar Lopera is smiling. – Seriously speaking, Mr. Medina supports our federation in every way and helps in the process of admittance to membership of the NOC of Columbia. He also promised to support SAMBO to enter the program of the Bolivarian Games held under the patronage of the IOC. Herewith, he hopes that SAMBO’s early entry into the Olympic family will help him herein.