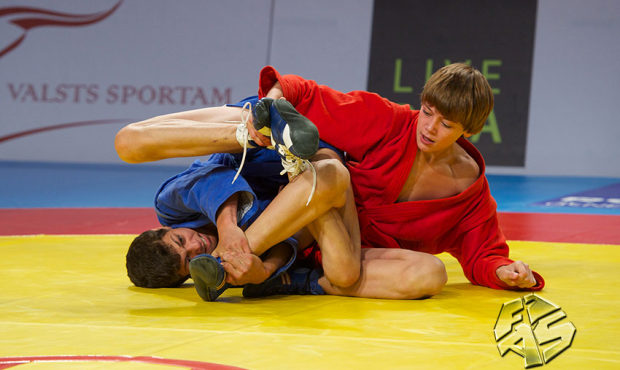 The first day session of the Open European SAMBO Championship among Cadets, held in Riga, has determined the bronze medal winners. Here is a report on splendid victories, painful defeats, and Latvian SAMBO fans’ expectations right from the capital of Latvia.

Among the matches for the bronze medals there could be distinguished several battles that have fastened the eyes of the audience and SAMBO fans. The weight category of 50 kg, boys — Orlando Gruia from Romania versus Mirfattah Seyidaliyev from Azerbaijan. Ninety seconds before the end, the score remains 0:0. The struggle is intense and unrelenting. Suddenly Orlando, an athlete with an outstanding appearance and memorable hairstyle, took his opponent down and immediately locks his leg. A moment later the rival submits, and the referee commands to stand up. The Romanian sportsman throws his arms up in the air. It is a gloriously victory and the first medal for the national team of Romania.

The first medal for Greece, which will host the Junior World Championship in less than a month, has been received in the weight class of 72 kg by Vasileios Balampanashvili. His considered tactics brought him 2 points and a confident win against the Ukrainian opponent. There is another “bronze” match in the same weight category worth mentioning, a real adornment of the day session. We are referring to the fight between Goga Kevkishvili, Georgia, and Maxime Pellegrin, France, completed with a score 11:0. This was a triumph of the Georgian wrestling school as we know it: it was tough, acute and full of interesting combinations. Side-to-side cartwheel, hip-roll, leg-show throw — the Georgian was at his best. In his TV interview to the FIAS group the French sportsman admitted: “I think that my today’s fifth-sixth rank is quite a good result. And what is of most importance is a unique experience: where else I could meet such a strong opponent? Indeed, he overcame me by 100%, he was the leader at every given moment, and he was definitely physically superior to me. Back at home, my coach and I will analyze the mistakes, review the match, draw the conclusions, and move forward.”

Talking about moving forward, this year’s performance of the Latvian national team gives the ground to suggest they are ready to go far. The team has already repeated its last year’s success with 2 silver medals at the 2013 Cadet Championship in Estonia, and soon we will find out if Latvia can rise even higher.

At the finals tonight we will see two Latvian female SAMBO wrestlers who have made their way through the semi-finals. Aiga Berzina, weight class of 52 kg, has counter-attacked her opponent Casandra Rusniac from Romania with a 4-point inside grip and made a match point with a winning painful arm lock. Another member of the Latvian team Viktorija Vasiljeva, weight category of 60 kg, has gained 4 points for a hip-roll and defeated Ukrainian wrestler Vlada Maslova with an overall score 5:1.

Well, tonight the SAMBO fans in Latvia may expect an exciting night that will require all their emotional strength and energy to support the girls. From our side, we would like to remind you that the night session will start at 17:00 Riga time with a solemn Opening Ceremony and continue with the finals that will bring together the best SAMBO wrestlers aged 15-16. A live online streaming will be available at the FIAS website.