Paraguay Sambo Promotion: within Days before the Start of the Pan-American Sambo Championship 2016 in Asuncion 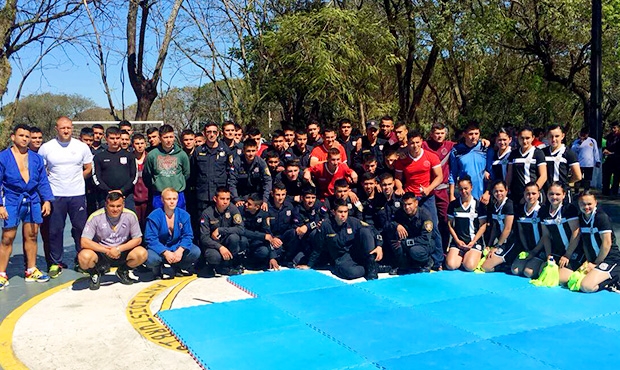 “What does promotion need?” you may ask. That’s right, it needs 3 components: vivid heroes, prime time on TV and support from powerful players. For sure, there might be other “three world-elephants” of success in promotion, but for current sambo tournament in Paraguay they look like that. They will be the topic of our today’s reporting from Asuncion.

Sambo heroes and future stars are currently being trained in Paraguay by the Russian coach Sergey Krivolapov; Nikolai Vladimir, the Adviser to FIAS President, spoke today on the major Russian state TV channel on prime time; Paraguay’s police is a powerful player of this event, that was visited yesterday by the FIAS delegation and enjoyed its demonstration performances and master classes. OK, let’s keep the order. 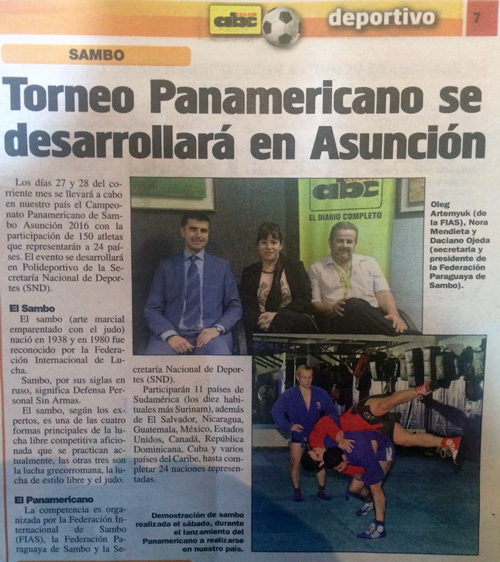 Sergey Krivolapov, a master of sports in sambo, has been staying in Paraguay for nearly a month. He was the person who spent three months in Thailand before the 1st Asian Beach Games 2014 in 2014, coaching Thailand’s sambo team. This resulted in successful performance of Thai athletes at the Games and the prestigious bronze medal won in this tournament. Now Sergey trains Paraguay’s sambo team twice a day. This weekend, his 15 current students will perform at the Pan-America Championship. Sergey comments his work as follows: The guys train regularly. They’ve already mastered Brazilian jiu-jitsu and MMA elements, so I had to improve their sambo ground fighting, expand their range of moves while standing and enhance their function. We’ll see.”

Primetime on the main TV channel of Paraguay

Today, Nikolai Vladimir, he Adviser to FIAS President and Russia’s former Ambassador to Nicaragua, took part in the announcing on the forthcoming the Pan-American Sambo Championship. In his prime time speech, Nikolai Vladimir spoke about sambo in the world and Paraguay, urging all residents of Asuncion visit the tournament and support their national team, as well as enjoy all the twists of sambo matches, that always fascinate, surprise and delight the audiences and fans. 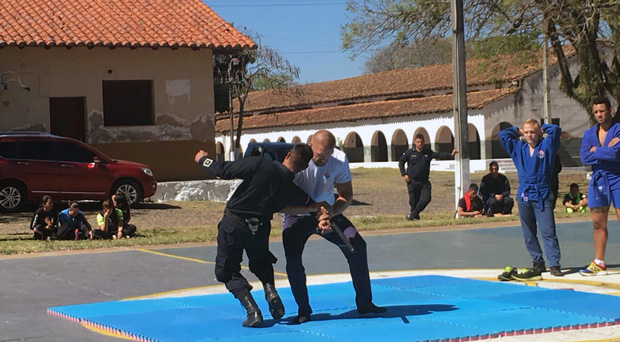 Yesterday, the delegation of the International Sambo Federation visited the special-purpose detachment of the Paraguayan police. 150 officers took part in the training conducted by Dmitry Maksimov, FIAS Sports Director and a master of sports in sambo, and the current coach of the local sambo team Sergey Krivolapov. The sports section was shown and taught by Sergey, while Dmitry was in charge of basic elements of the apllied sambo, which always nicely fits training and special training of law enforcement officers worldwide around the globe. The policemen were particularly interested in the techniques: how to block hacks, protect oneself from blows with a stick and attacks with a gun and a pistol. All master classes participants were excited to try and mastered all the techniques shown. Also, they promised to visit the weekend competition with all their detachment to enjoy sambo in action.