The European Championship in Cyprus: the first gold of the Lithuanians, heavyweights technique shades, the Ukrainian hero and preliminary results of the team Championship 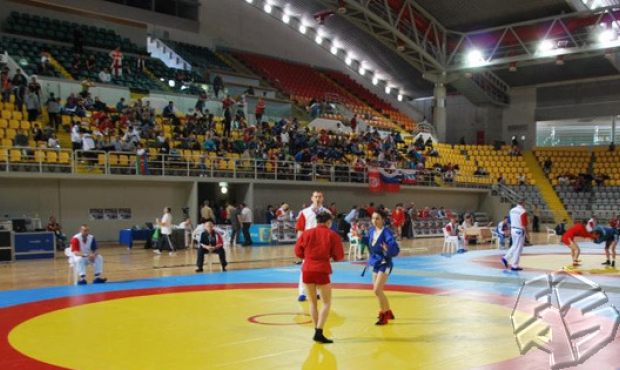 In the Mediterranean Sea of Limassol windsurfers and kitesurfers habitually fought with wind and waves. And young SAMBO athletes under the age of 18 and 20 but of different weight categories than yesterday, continued their fighting with opponents from 22 countries of the Old World in the Cyprus Hall named after Spyros Kyprianou.

I’ll clear up a small mystery of the Lithuanians. Yesterday, sitting in the public room of our hotel and working on the next report from Limassol, I watched as Lithuanian SAMBO Federation President Eduardas Rudas and his colleague, Estonian SAMBO Federation Dmitry Samoschuk, paraded to the beach for a night swim quite late at night. When I met Eduardas in the public room in the evening, I joked that night swimming became a lucky charm and brought his team the first gold of the European Tournament, which was won by Meda Blazeitite in weight up to 60 kg among female juniors. The result – more recently the same characters with towels over their shoulders have paraded past me to the beach. And we believing in sports omens, accordingly, can wait for another Lithuanian gold on the final day of the European Championship.

On the final day of the Championship of the Old World, my fellow commentator Mikhail Martynov and I will not be able to check our guess that over the back throw with arm clinch under the shoulder (in SAMBO slang – “his own with a throw” and a “tail”) – is the most frequently performed hold among the heavyweights. This was only our assumption, however, based on experience and years of observation. But tomorrow SAMBO athletes performances in heavy weight categories are not outlined, they have fought today, so we’ll not manage to check our guess once again.

But one of SAMBO heavyweights just stroke us all of a heap today. And I’m sure not just us but all those present in Limassol today in order to watch SAMBO. The fact is that in the final fight among young men in the weight up to 100 kg the Ukrainian Roman Goncharuk was behind his opponent from Georgia Guge Kibordzalidze by 4 points during the match, besides he injured his knee seriously, which was operated on a year earlier. The Ukrainian was decently lame of one leg, so in this scenario the score on the scoreboard didn’t supposed a different outcome but the Georgian’s victory. What was our surprise when Roman performed the favorite heavyweights’ hold (which I mentioned earlier) by 2 points and held the Georgian by another 4. As a result, when 3 seconds were left till the end of the fight, he led 6-4 and won the fight. And all the audience was struck by the athlete’s feat since he have overcome the trauma pain and bitterness of the unsuccessful fight and was able to reverse the outcome of the meeting and bring his team the gold medal of the Championship.

And finally I would like to say about the medals, namely, the preliminary results of the Team Championship of the competitions. So, as we managed to learn from the judicial manpower, after two days of the European Championship the Ukrainian team took the 1st place among young men, the Russian team – among girls, the Georgian SAMBO athletes – among male juniors, and the Russian team leads among female juniors. In the overall standings the Russians are the first, the Ukrainians take the second position, and the Georgian SAMBO athletes close the top three winners of the team classification.