Beach Sambo in Australia: on the Sand Listening to the Sound of the Surf 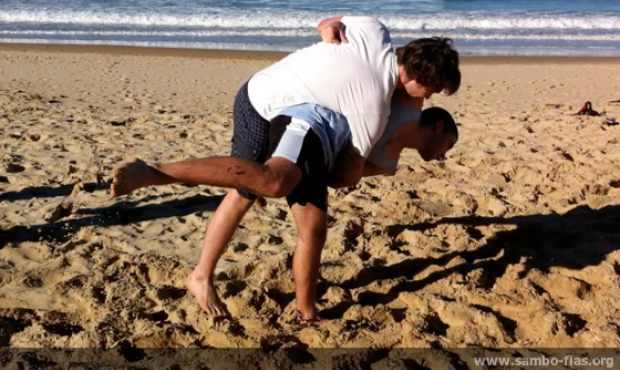 The sound of the salty sea, warm sun in the sky, loose and fine sand under your feet - if you practice Sambo in Australia, the beach can become your gym. At the weekends Woonona Beach NSW goers in Sydney were fascinated to watch the athletes practicing different techniques of Sambo, honing their throwing techniques and weight lifting. The process was guided by the Terry Williams, Vice-President of the Australian Sambo Federation.

"Wrestling mats are a real rarity, besides they are rather expensive. And the beach is a free and peaceful place for training next the ocean - says Terry Williams. - Moreover the sand on the beach has a dual role: on the one hand, it has a soft surface to fall when practicing techniques, on the other hand, it helps improve footwork to better agility and increases load for the muscles".

By the way, the desire to strengthen the legs made Terry head for the beach around 15 years ago. Firstly he had an individual practice but over the time he began training teams of promising wrestlers and MMA fighters. However, as Terry says, he cannot be called an innovator. "Beach or sand" wrestling is practiced in many countries, most of them, of course, are known for their warm climate. Canarian wrestling is practice on the beaches in the Canary Islands, Gouren is a style of wrestling practiced in French Brittany and Ssireum is a wrestling style played in Korea. And in Australia we prefer Sambo" - smiles Terry Williams.

His preferences in choosing a martial art Terry explains as follows: "Guided by my experience, I came to the conclusion that SAMBO is the most effective wrestling technique that also promotes excellent physical fitness. When holding my classes I stick to the methods of practicing we were taught by the Director of the FIAS Development Department Andrew Moshanov during his visit to Australia. Apart from SAMBO techniques in our practices we also use techniques of the Olympic sports such as boxing, wrestling and judo. I used to study all these martial arts, so I can choose the most successful techniques from them and incorporate them into our training session".

According to Terry Williams, beach trainings are very popular with the fans of martial arts. "They are visited not only by the members of our sports club, but by the athletes who have to travel by train an hour or even more to get to the destination. In addition, I arrange special classes for children. Participants of our classes say that beach trainings strengthen their stamina and improve their agility".

Comparing the gym with the beach, Terry highlights the main difference: "The best thing about training on the beach is having the opportunity to swim after them: bathing in the salt water of the sea relaxes the muscles. I also believe that for general physical fitness my combination of SAMBO techniques with weights lifting on the beach has a number of special benefits compared to the training in the closed space of the gym. Of course, if there is no rain!"- Smiles Terry.

It should be noted separately that the Australian climate enables to hold trainings on the beach all year round. But bathing in the sea after the trainings, according to Terry Williams, is possible only 5 months per year. Watching today the wrestlers and Terry who is again holding training on the beach, you can conclude that Saturday weather favors them.