Preodoleniye held for the third time 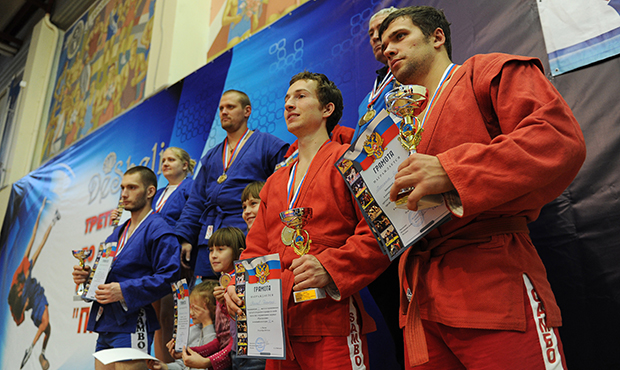 On October 18 Moscow greeted the third sambo tournament called Preodoleniye for athletes having health restraints. Wrestlers from a number of Russian regions, such as Tyumen, Perm, Chuvashia, Ulyanovsk and Moscow, gathered at the event in the Sports Palace of 80s Olympic Village. The residents of Kirgizia also took part in the competition.

The tournament was organized by the Moscow Federation of Sambo with the support of the Department for Physical Culture and Sport of Moscow and the All-Russian Federation of Sport for Vision-Impaired People. The general sponsor of the tournament is DeSheli, and the media partner is Boets TV Channel. 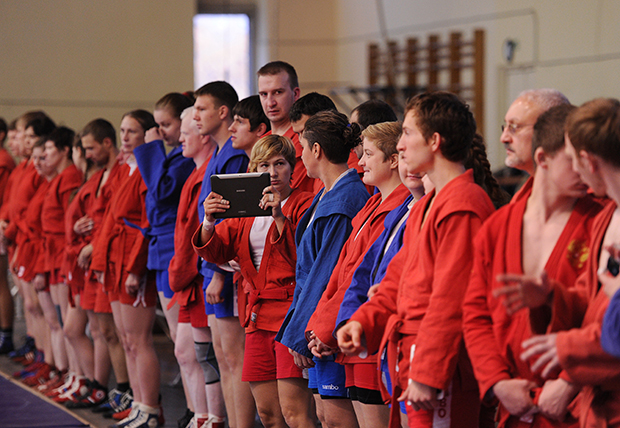 When speaking before the competition participants, Sergey Baydakov, the President of the Moscow Federation of Sambo, recalled the importance of such sambo tournaments, wished the athletes to have good and technically-balanced fights and announced the opening of the Preodoleniye tournament.

Before the main competition started, the wrestlers traditionally made an exhibition performance when sambo techniques were demonstrated by the athlete having locomotor system issues – Pavel Ogurtsov, the representative of the Dvizheniye sports club of the South Administrative District of Moscow. Pavel (born in 1999) has infantile cerebral palsy. He has been in for sambo since 2007; he has the second junior category and is a participant and a prize-winner of junior sambo competitions. Pavel was assisted by his own twin-brother Ilya who has the first junior category. Pavel’s coaches are Margarita and Anton Paperno. 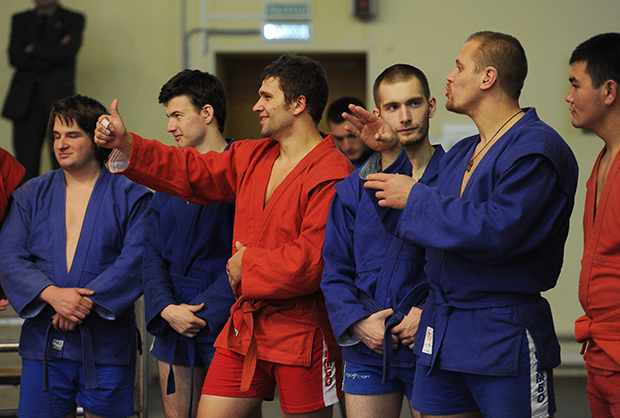 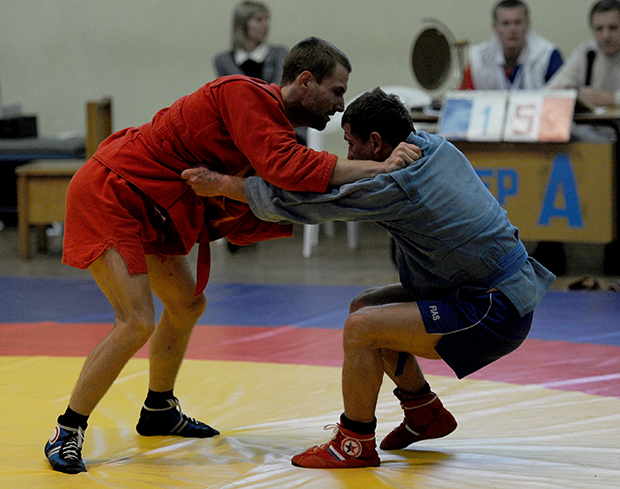 After conducting final combats, there was a team encounter in five weight categories (up to 68, 74, 82, 90, 100 kg) between vision-impaired and hearing-impaired sambo athletes. Their combats were very tense, and there was no possibility to guess who was going to win right until the last encounter. Eventually, the hearing-impaired athletes won with a score of 3:2 in team competition. 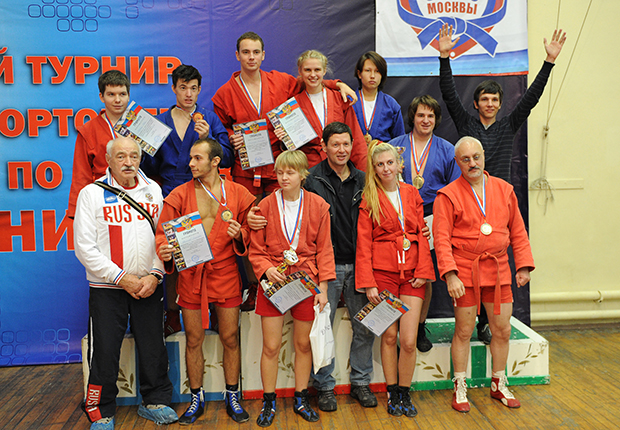 The participating sambo wrestlers gave no peace to the famous athlete Alexey Oleinik asking him to make a photo with them for which he kindly agreed.

“When I learned about the tournament, together with my wife and children we decided to come here to support the impaired athletes,” he said.

Remarkably, the number of spectators on the tribune of Preodoleniye increases with each tournament, and that means that the interest in this competition constantly grows.

“I accidentally learned about this tournament on the Internet and decided to come to see with my own eyes how vision- and hearing-impaired people are able to do sambo combat. I couldn’t imagine it. I really enjoyed the competition and was energized by what I saw,” shared her impressions one of the spectators, Maria. 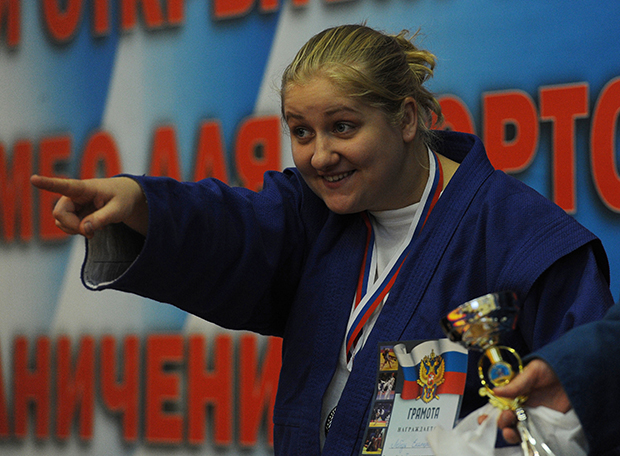 Igor Ryazantsev, the Chief Editor of Boets TV Channel, told us that he watched many competitions, but Preodoleniye is a very special tournament.

“The athletes here are really overcoming! Having these health restraints they still show a good fight. I wish the organizers to continue to hold such tournaments at a high level, and Boets TV Channel will try to cover these events as much as possible,” he said. 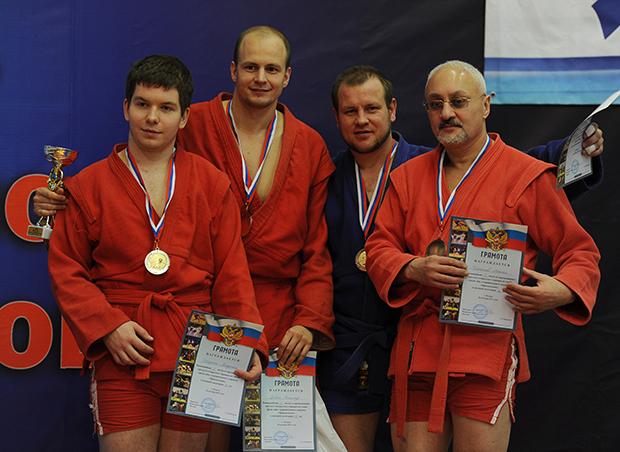 Svetlana Neubauer-Sokolik, the Adviser to President of the Austrian Sambo Federation, also shared her experience at the tournament: “I’ve read and heard a lot from my colleagues concerning the sambo competition for disabled athletes, but it’s the first time I am present personally at such an event. I intentionally traveled to Moscow from Austria to visit two events: the tournament for Aslakhanov’s prizes and Preodoleniye. The organization level of Preodoleniye is very high and the initiators have made their best. Evaluating such competition without regard to emotions, it is absolutely certain that the tournament represents a purely social side of sambo. It is necessary to support the organizers of these events in every way, not just by words, but with real actions. I hope that the next Preodoleniye tournament there will welcome more representatives from different countries’ federations as honored guests. To know how to make a good fight is not an indicator yet, you also need to know how to ‘create’, and this is an art which is much more difficult to learn!” 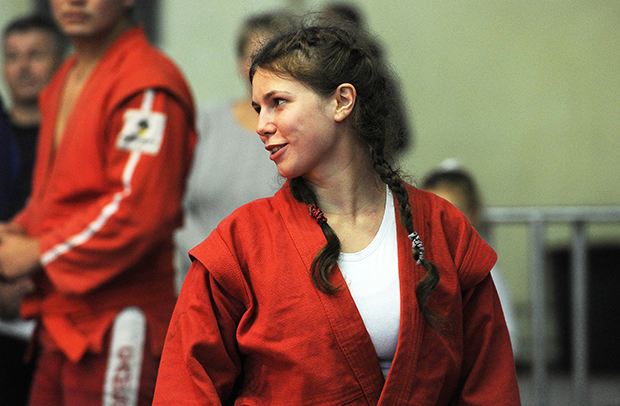 The award ceremony was held following the results of the tournament. The distribution of awards was made by Yuri Zhukov, the Vice-President of the All-Russian Federation of Sport for Vision-Impaired People, Oleg Pelipas, Deputy Chairman of the Police Association, and Roman Novikov, Co-Director of the Commission on Sambo Development for Health Restrained Athletes in the All-Russian Federation of Sambo. After the award ceremony, Almaz Karpayev and Kalbek Irgiz (the prize-winner of Deaflympics in judo and the winner of Preodoleniye in his weight category), the representatives of the Kirgiz Federation of Sambo, solemnly presented national Kirgiz outfits to the initiators of the tournament. 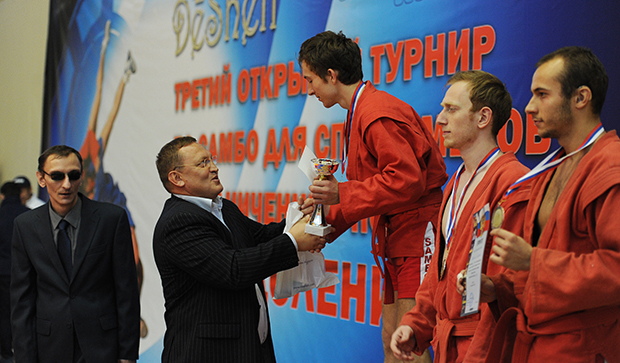 Viktor Ignatenko, one of the organizers and the chief referee at the competition, shared his opinion about the event: “It is very difficult for me to evaluate the organization level. This evaluation should be made by the athletes, audience, those who watched the event from the outside. There were both women and men fighting on the mats. The number of combatants is not very large comparing to healthy wrestlers, and this is, probably, for the best. Surely, many of athletes couldn’t come because of traumas received at different competitions, some of them were ill, and others just don’t have the money to pay for tickets. Unfortunately, these problems exist, but we will try to solve them! On behalf of the organizers I would like to thank the Department for Physical Culture and Sport of Moscow for their assistance in providing a combat hall in the 80s Olympic Village, and I also express my gratitude to the general sponsor – DeSheli represented by the General Director Eduard Filbger. Without his financial help this event would not have been possible to conduct! We are hoping for further cooperation. I would also like to thank everyone who helped with organization of this tournament. See you next year at the fourth Preodoleniye!” 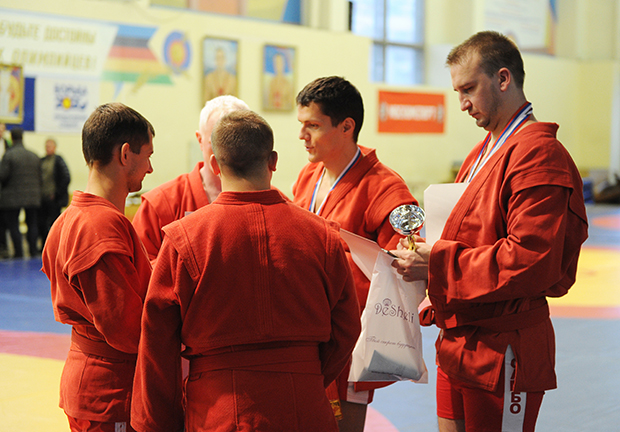