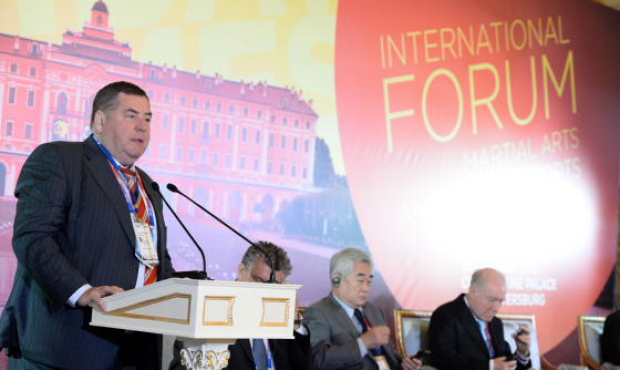 The world of martial arts and combat sports in society international forum has been opened today at Konstantin Palace in St. Petersburg as part of SportAccord World Combat Games. The forum was attended by Marius Wieser, the President of SportAccord, Wilfried Lemke, the UN special adviser on sport, Presidents of the international federations participating in the Games, as well as Fedor Emelianenko, the Sambo Ambassador and Olesya Kovalenko, the Sumo Ambassador.

When making a report, Vasily Shestakov, the FIAS President, noted the importance of the Sport, Human, Health Congress held as part of SportAccord World Combat Games: "I would particularly like to thank the management of SportAccord for supporting my initiative to conduct special research based on sports included in the programme of our Games. We reported the results of this study on the Congress in which many people who are present here today have been actively involved. Both Sport, Human, Health Congress and this Forum show serious intentions and plans of SportAccord to bring serious science and serious sports together. In my point of view, this is extremely important, because the progress of results in sports is impossible without the support of science.

Further in his speech, the FIAS President spoke about social and educational programmes of the International Sambo Federation and the possible contribution of Sambo values to society. Social programmes in Burundi, Tanzania, China, Colombia, in which FIAS experts participated in last year, confirm the fact that society can benefit from sports.

The FIAS President emphasized: "Of course, I cannot but mention the growing trend of socialization of great sports. The new accents in the activities of the IOC and its initiatives to support and develop the Sport for All movement are very important as well. The Committee also maintains working communication with the World Health Organization and the UN humanitarian projects. The social initiatives department of SportAccord has been working for several years. The International Sambo Federation is also rapidly developing in this direction. We have such social programmes as "The ability to Properly fall" and "safe life package". We also cooperate with World and Sports organization. I think this is a very promising stratum that we need to develop and actively promote to the world of modern sport."

During the break Vasily Shestakov also spoke to Wilfried Lemke, the UN special adviser on sport, who reacted to FIAS social programmes with attention. At the meeting, an agreement about possible collaboration and cooperation of the UN and FIAS was reached.

There are still three competitive days of the Games in St. Petersburg. Many exciting sporting events and important official meetings will definitely happen during this time. On October 26 the official closing ceremony will proclaim that World Combat Games II in St. Petersburg will become a part of sports history.