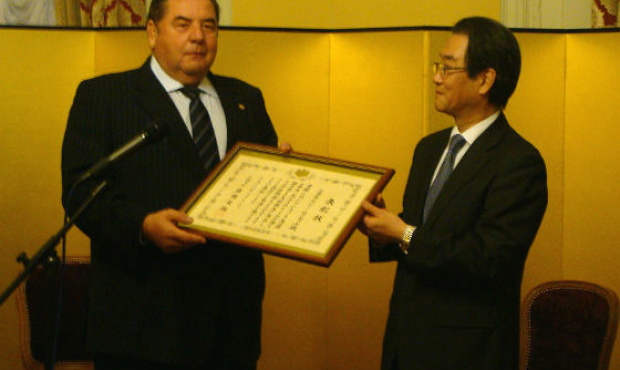 A reception celebrating presentation of a certificate of honour of the Minister for Foreign Affairs of Japan to Vasily Shestakov was held on 1 October at the residence of the Ambassador Extraordinary and Plenipotentiary of Japan to Russia Mr Tikahito Harada. The certificate has been awarded for exceptional and longstanding efforts in promoting political, cultural and economic engagement between the two countries.

In his welcome speech, Mr Harada emphasised Vasily Shestakov’s outstanding achievements in promoting parliamentary, youth and sports exchanges. The Ambassador noted that Mr Shestakov had been elected member of the State Duma in 2004 and immediately became involved in the work of the group for promoting the relationship with the Japanese parliament. Tikahito Harada also appreciated Vasily Shestakov’s activities as head of the Yavara-M children’s and youth sports club.

“In 2005, together with Yasuhiro Yamashita, you launched a campaign to exchange delegations of young judokas”, Mr Harada said. “The most important visits were those of judokas from the town of Beslan, which was a target of a terrorist attack in 2004, and of young Japanese athletes from the earthquake-ravaged Fukishima to St Petersburg.”

The Ambassador also mentioned the vast potential for friendly and good-neighbourly relations between the two countries, underpinned by the progressive advance of SAMBO in Japan. He emphasised the holding of the All-Japan Russian President Vladimir Putin SAMBO Cup in 2013. Ambassador Tikahito Harada wished Vasily Shestakov success in his endeavours and presented him with the certificate of honour of the Minister for Foreign Affairs of Japan.

The FIAS President thanked Mr Harada and expressed his gratitude to the Ministry for Foreign Affairs of Japan for the appreciation of his work. In his speech, Vasily Shestakov noted that he had been keen on both SAMBO and judo since his teenage years. Just like all young judokas, he had dreamed of visiting Japan and staying at the Mecca of judo, the Kodokan Judo Institute. He also said that he had watched Akira Kurosawa’s “Sanshiro Sugata” over and over again, trying to comprehend the secrets of judo training routines. Vasily Shestakov also spoke about his longstanding work to promote the relationship between the two countries.

“This work has been possible owing to the generous support from the Japanese side. Over these years, I have had a several meetings with Prime Minister of Japan Mr Junichiro Koizumi; we have also enjoyed support from Mr Toyohisa Kozuki, who is currently Director-General of the European Affairs Bureau at the Ministry for Foreign Affairs of Japan. We have had numerous joint projects in both judo and SAMBO with the legendary athlete Yasuhiro Yamashita, who is currently Vice-President of the All Japan Judo Federation”, the FIAS President said.

“Back in 2009, I arranged a visit by State Duma members to Tokyo and that visit proved very interesting and helpful, as we exchanged experience in law-making practices”, Vasily Shestakov said. “The delegation of Russian MPs consisted of former champions, who gave master classes. These were a tremendous success with the Japanese audience. We also have regular exchanges of delegations of young judokas: ever year, young athletes have a great opportunity to embrace the culture and traditions of the other country and make new friends. We are also making considerable progress in promoting SAMBO in Japan and the medals of the Japanese SAMBO team at the University Games in Kazan are ample proof of this.”

Concluding his speech, Mr Shestakov thanked Mr Harada for organising the event and expressed hope that friendly and good-neighbourly relations between Russia and Japan in politics, sports and culture would be further promoted.

Vice-President of the All Japan Judo Federation Yasuhiro Yamashita and member of the FIAS Executive Committee Nobuyuki Asai sent notes to congratulate FIAS President Vasily Shestakov on his award.