Roberto Ferraris: "Had We Put The Clock Back, I Would've Chosen SAMBO Again" 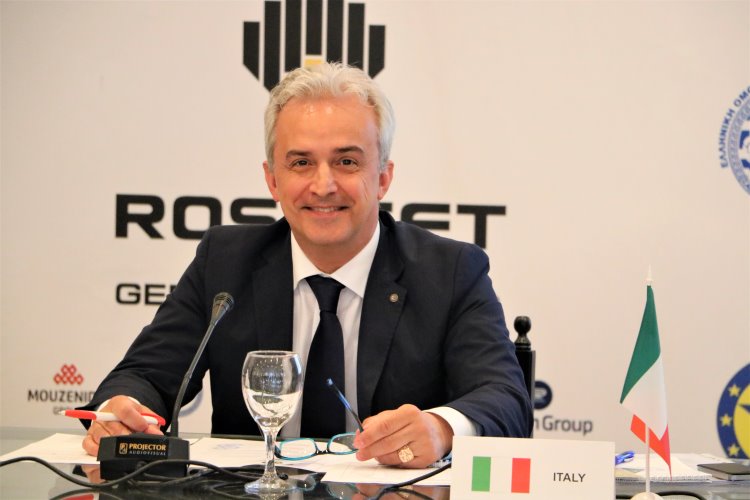 SAMBO in Italy has been actively expanding for more than 40 years. This is largely due to Roberto Ferraris, Secretary General of FIAS, member of the Council of the European SAMBO Federation, one of the leaders of F.I.KBMS (Italian Federation of Kickboxing, Muay Thai, Shootboxing, Savate, SAMBO). Roberto considers Russia to be his second homeland, as it is not only his beloved work or his career, but also his family that attaches him to this country. Roberto has readily answered the questions of "AN".

- Roberto, when did Italians turn their attention to the national sport of the peoples of the USSR, for the first time?

At that point of time, SAMBO was promoted in Italy through the federation of wrestling, but in fact, there had been no real SAMBO experts in it yet.

- What attracts Italians in SAMBO?

- In the early 1980s SAMBO in Italy immediately took the third place in the martial arts, along with freestyle and Greco-Roman wrestling. However, because of the difficult political relations, there was practically little opportunity and incentives to promote it to the mainstream sports enthusiasts. But the real sambists never betrayed their favorite sport. We even succeeded to get commendable results at international level, I mean, medals at World and European Championships, as well as at such prestigious tournaments as “A. Kharlampiev Memorial”. In three years, this tournament had received the title of the World Cup.

In the early 1990s, many sambists emigrated from the former USSR and went to coach SAMBO in other countries. They were demonstrating in practice the effectiveness of the Russian SAMBO school, infecting the Italians with their love of this discipline.

In 2002, my Moscow friends among sambists have proposed me to head a SAMBO club in Italy. I started immediately with the certification of this activity through the agency for the promotion of sports, I was willing to clearly convey to my colleagues the main advantages of SAMBO over other martial arts, its coaching methodology, so that they understand that such a winning ticket should not be neglected!

I began to poach experienced coaches into SAMBO, was arranging the basic training courses for beginners.

As 40 years ago, I am ready to assert that SAMBO is a full-fledged athletic, training, and educational discipline, and highly efficient one, at that. Its success is inevitable!

- How did you personally get acquainted with SAMBO?

It happened in 1979. I was young, I loved to fight, and one day a friend of mine invited me to a gym, where he was practicing SAMBO. After the very first workout, I came to realize that this sport was mine. However, the gym was a long way from my home.

I was living in the center of Milan near to the most famous judo sports club in the city, but there was a very tense atmosphere over that place, so I felt rather uncomfortable there.

And, despite the protests of my parents, I decided to train at that gym in the back of beyond. Three times a week I was spending more than two hours on the move, to get to my SAMBO training session.

My mother worried a lot over my late returns, and also because I was having but little time and strength to study.

I remember my first blue SAMBO jacket: when I put it on, I was bursting with pride! I'm keeping it all these years. Who knows, maybe I would pass it down to my youngest daughter?!
I can say in all modesty that I'm one of the first real Italian sambists, natural-born for this sport. In the following years I also engaged a lot in judo, but with SAMBO, it was undying love at first sight!

And for the love of SAMBO, I had to sacrifice a lot. For years on end, I went to practice to the countries of the former USSR (Russia, Belarus, and other republics), in order to become a high-level expert, certainly, at my own expense.

In the course of my sporting career, first as an athlete, and then as a coach, I participated in numerous competitions, and established strong relations of true friendship with my Russian colleagues. A few guys and their families have been my friends for decades.
Not everyone in Italy was delighted with my choice in favor of SAMBO. At some point, my working life and career in sports were at high risk. Yet, had we put the clock back, I would've chosen SAMBO again.

- When did you become the Secretary General of FIAS?

- For the first time, I was elected as the FIAS Secretary General in 2013, and then I was reelected at the latest 2017 elections.

As to FIAS itself, established in 1985 by my friend Fernando Compte (Spain), I must say that over the past ten years it has shown remarkable growth!

The current FIAS President Vasily Shestakov has been able to build up a tight-knit team that includes people from different parts of the globe, in order to develop SAMBO in every respect, technical, promotional, organizational, or public one, you name it. Thanks to these efforts, SAMBO followers have emerged even in the countries that are pretty far from the traditions of our sport.

Today, FIAS has its head office in Lausanne and President’s office in Moscow.
At present, SAMBO is being practiced in 120 countries, most of which have SAMBO federations recognized by their national Olympic committees.

SAMBO is represented at the most important multi-sport events, such as Continental Games, Student Games, Martial Art Games.

We have signed agreement memorandum with the CISM (International Military Sports Council), and are working towards the inclusion of SAMBO in the Military World Games.
In 2018, the Asian Games were held in Jakarta (Indonesia). Next June, the II European Games will be held in Minsk.

Following the trend of All-Russian SAMBO Federation program, this martial art is becoming popular among Italian schoolchildren and students. In this area of work, we are actively supported by F.I.KBMS Federation (Federazione Italian Kickboxing - MuayThai - Savate - Shoot Boxe - SAMBO) that unites a number of sports, including SAMBO, with CONI (International Olympic Committee of Italy) and MIUR (Ministry of Education) being quite cooperative, as well.

Over the past three years, the FIAS team have done a great amount of work, and on November 30, 2018 the IOC (International Olympic Committee) officially if as yet provisionally recognized SAMBO as an Olympic discipline at last.

- What is the place of Italy within the European SAMBO Federation?

- From the viewpoint of competitive results, certainly, the majority of sambists come from the countries of the former USSR, especially from Russia, Georgia, Belarus, and Ukraine.

Italians also manage to hit a world or continental medal stand at least once a year, in Bulgaria, Romania, France, and Italy.

In our SAMBO calendar, there are three national tournaments, individual championships, with the Italian Team Cup at the end of each year. Currently, SAMBO in Italy is practiced by 2,000 athletes of various ages. Most of our sambists can be found in such regions as Lombardy and Lazio, but the level of expertise and, consequently, that of the sports clubs is growing in other regions, too, for example, in Veneto, as well as on the islands, Sardinia and Sicily.

- Is it possible to introduce SAMBO training in self-defense at the legislative level in Italy?

- As you know, SAMBO is spelled out as "self-defense without weapons". That is, since its inception SAMBO was aimed to ensure personal safety.

As to the legislative level, there is a pretty accurate judicial practice in Italy that defines the limits of self-defense, although in real life the situation is far from being perfect.

In Italy, schools of self-defense for women and for all comers emerge by the score, but the level of training in them leaves much to be desired ... I see it as my duty to advise our signorinas to receive training given only by the qualified coaches belonging to the sports federations recognized by CONI.

- What binds you to this country, apart from your work?

- I very often visit Russia, to which I am attached not only because of SAMBO, but also because my wife, Olga, is Russian. We've got two daughters, the eldest one,Valeria, is 22, and the youngest, Anna, is 2. They both have dual citizenship, of Russia and of Italy. My wife is not an athlete, although we've met at the International SAMBO Academy in Kstovo which is one of the best SAMBO schools.

At home, we don't suffer from lack of Russian traditions, and I believe it is important that my children, as they are permanently living in Italy, do not forget their roots.

- Do you speak Russian?

- I've learned Russian language in Russia. I've learned it all by myself, by using textbooks, never attending any special courses.

I speak Russian with my friends, and I easily understand them. But at conferences or other official events I speak English.