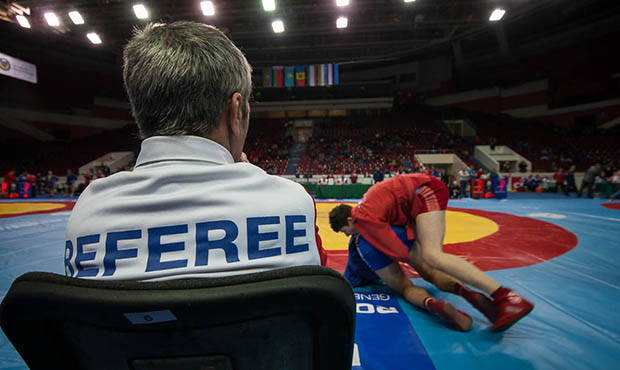 Russia, St. Petersburg, Yubileyny Palace of Sports. It was here where on February 27 a traditional International Junior SAMBO Tournament dedicated to the memory of the “Feat of the 6th Airborne Troop” was held. It is not just and not so much a competition to identify the winners, but the event aimed at patriotic education of the youth, as well as an opportunity to remember the fallen heroes.

– The youth needs a tournament of this format, – shares his thoughts Sergey Kozhemyakin, a father of the Hero of Russia. – The older generation was brought up on the examples of heroes of the Great Patriotic War, the younger generation has its own heroes of the same age. These young guys given their lives for their Motherland, serve those examples on which we have to bring up them and be like.

The heroes-troopers of the 6th Airborne Troop of the 104 Regiment of the 76th Guard Airborne Chernigov Red Banner Division while executing a counter-terrorist operation on the territory of the Chechen Republic in the Argun Gorge on the night from February 29 to March 1, 2000 accepted uphill battle with the multiply superior forces of militants. The troopers prevented the penetrating forces to clear defenses at the expense of their lives. 84 of 90 troopers of the Guard Troop were killed, 15 of whom were residents of St. Petersburg and Leningrad region.

At the solemn opening of the competitions members of the St. Petersburg Government, leaders of public veterans organisations of the city, notable workers in culture and arts were present. Vyacheslav Makarov, Chairman of the Legislative Assembly of St. Petersburg, Yury Avdeev, Chairman of the Committee for Physical Culture and Sports, Vasily Lanovoy, the People’s Artist of the USSR, leaders of public veterans organisations of the city were the honorary guests of the event. Not only officials but also parents, wives of those soldiers, in whose honor the Tournament is held, were among the guests of the competitions. They paid tribute to the memory of the heroes by a moment of silence after all the names were called and pictures on large screens of the Yubileyny were shown.

This year 138 young athletes from Russia, Belarus, Estonia, Azerbaijan, Kazakhstan, South Ossetia and Abkhazia took part in the large-scale competitions. Cadets of the Suvorov and Nakhimov schools of St. Petersburg are among the participants of the Tournament.

– The highest reward for this feat, the most important thing is the memory of the troopers, – said Vyacheslav Makarov, Chairman of the Legislative Assembly of St. Petersburg, in an interview with journalists. – This tournament is held for the fourteenth time, and it is significantly that pupils, cadets, suvorovtsi, nakhimovtsi. When young people touch this feat, readiness to give their lives for the Motherland, for their country, they all are brought up drastically wrong.

It is for the second year in a row already SAMBO veterans participated in the Tournament, and they perform not in exhibition performances, but in a real command fight. According to the organiser of the Tournament Vadim Sagalaev, the veterans showed the true beauty of this sport and inspired young men by their fight. Six SAMBO veterans’ teams from different Russian cities competed for the main cup of the competitions. In a stiff fight the Airborne Troop team got the title of the winner, the SAMBO-70 Club (Moscow) got the 2nd place, third the national team of St. Petersburg and the team of Rzhev shared the 3rd place.