SAMBO at Asian Beach Games: It Will Be Hot! 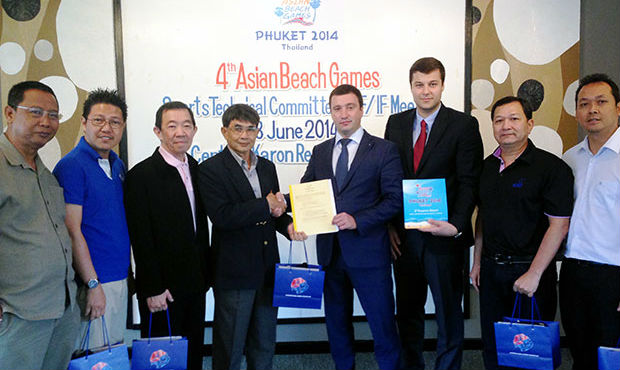 For some people summer is the time to sunbathe on the beaches, and for other people –it is the midst of training in order to fight on these beaches afterwards. On November 12-13, in Phuket (Thailand) the IV Asian Beach Games will take place with the program which will include the beach sambo for the first time. The corresponding agreement between the International Sambo Federation and the organising committee of the Games was signed on June 18 in Phuket. This means that sambo athletes have got a new interesting start in an unusual format in their calendar, which is likely to become popular soon. Read on the FIAS website about how the future ground for the competitions looks like today, what trainers are preparing the athletes from different countries, as well as where you can watch the live broadcasting of the tournament.

June in Phuket is a rainfall season, so the sky is overcast and the sea is lumpy. Correspondingly, in summer there are noticeably fewer tourists in Thailand than during the peak months. That is why it is not so easy to get a true image of what the atmosphere will be like in November at the Asian Beach Games, even if you are directly on the future site of the competitions. However, it does not prevent the organisers from preparing the tournament - at the moment they have already planned out in detail all the objects, which will be located on the site of the competitions. It is noteworthy that the ground, where the sambo battles will be held, is located on Karon Central Beach. It is this location, which will be used after sambo athletes for competitions in popular beach volleyball. From the very beginning it will be in the center of attention, and we may expect a unique atmosphere of a sports festival during all the competitive days.

It is to be recalled that at the beginning of the year the Sambo Union of Asia has been recognised by the Executive Committee of the Olympic Council of Asia, and sambo has been included in the Asian games. One of the next steps was that sambo was also included into the program of the Asian Beach Games.

“The Agreement between the International Federation of Sambo and the organising committee of the Asian Beach Games, according to which sambo was included into the program of this tournament, was signed on June 18 in Phuket”, says Alexei Gradov, Head of the FIAS Presidential Administration. “It is a milestone event for FIAS. For the first time in the history the athletes will take part in sambo competitions, which will be held in the format of beach Games. In this regard, a new uniform has already been developed, as well as the rules have been adapted, which will allow holding competitions on the beach with maximum visual appeal. It is expected that more than 100 sambo athletes from 20 Asian countries will participate in the sambo tournament in the program of continental beach games”.

While the organisers are preparing to host the games at the highest level, the athletes have started training. Sambo athletes of 68 kg, 82 kg and 100 kg weight categories in men and 52 kg, 64 kg and 72 kg in women will take part in the tournament. It is interesting to know that the host country of the current Asian Beach Games, Thailand, has applied to FIAS with a request to help with preparation of the national team. The International Sambo Federation is planning to send an experienced coach to the country, who will bring the local sambo athletes into peak form by the competitions. By the way, they have already been rendering a similar assistance to the national team of Kuwait, where since the beginning of June Sergei Yermolaev, a FIAS specialist, Master of Sports in Sambo, has been working with the sambo athletes, who are preparing for the Asian Beach Games.

We will find out in November, which of the teams will be able to prepare for a new kind of sambo in the best way and fight successfully on the beach under the Thai sun. Now the country is full of tourists, so it is clear that the tournament will have no lack of audience. If you do not plan a trip to Thailand in the coming autumn, then you will be able to watch the competitions live on the FIAS website. the Olympic Council of Asia Department TV will be the host broadcaster for the tournament. So, do not miss: on November 12-13, the sambo tournament in the program of the Asian Beach Games. It will be hot!