SAMBO at the 2013 Universiade: be ready! 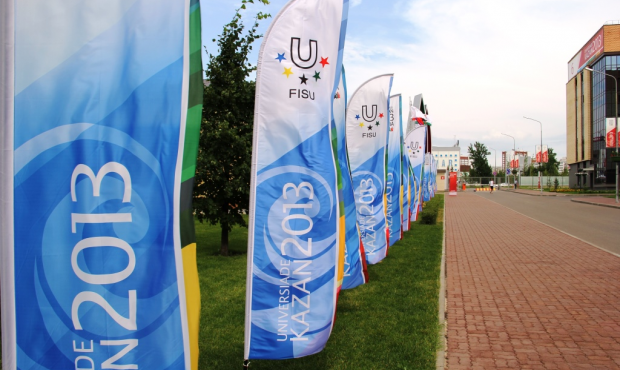 Today, two days before the start of SAMBO tournament at the Universiade, the majority of national teams that will compete in this sport, are arriving in Kazan. SAMBO has been included in the program of the Universiade for the first time, that’s why much in Kazan will be for the first time for SAMBO athletes and their fans. The FIAS website found out the details of the 2013 Student Games and presents them to your attention.

Officially opened on June 29, 2013, the Universiade Village has become a place of residence for athletes and other members of delegations for the period of the XXVII World Summer Student Games. In addition to the well-developed infrastructure (there is everything – from the pharmacy to the studio – in the Village) this “settlement” has everything necessary for SAMBO athletes not to be bored. According to the rare journalists who were allowed to find themselves in the Village, every participant there takes pleasure from what is happening around. They have fun, play football, basketball, chess, play games console, bathe in inflatable pools or simply ride a bicycle along the streets of the village. The main thing about all this fun is not to forget about the main purpose of the arrival at the Universiade.

Usually glittering with ice, on July days the Sports Complex turned into a place of judo and SAMBO fights. Tatneft-Arena, a home arena of the Ak Bars Hockey Club, knows firsthand what combat sports are. Every year the Fighting by the TNA’s Rules for the TATNEFT Cup World Championship is held in the Sports Palace. The Tatneft Arena also serves as a concert venue. Group Scorpions, Swedish pop-rock group Roxette, the legendary British musician Sting have performed here. Judoists have performed here recently, and as early as on July 13 SAMBO athletes’ training sessions will begin, and on 14th – the competitions.

Those who have been closely watching the progress of the Universiade from the very start, have certainly noted for themselves the quality and quantity of the Student Games broadcasts. Daily broadcasts of the competitions in a mode which is usually characteristic for the Olympics’ coverage, are carried out on Eurosport, an international channel, and Russian 2, a Russian channel. Herewith the quality of the “picture” is unprecedented for sports TV. “Compared to 2011 the current coverage program of the Universiade in Kazan exceeds the previous one almost fivefold. We haven’t covered Universiades so widely on our channels yet”, –Dmitry Kuzmin, the Chief Director of the Russian branch of the Eurosport channel, said. Note that the FIAS website continues the tradition of live webcasts of the largest SAMBO competitions: on our website you will see the SAMBO Tournament in full – all three competitive days from July, 14 to July, 16.

Of course, athletes are the main characters of these days in Kazan, but sometimes it won’t hurt to catch a break even from the most spectacular events. The spectator tickets holders can see not only the battles on SAMBO mats, but also a special show of the famous Cirque du Soleil at the Universiade. Kazan is only the second city where the Canadian circus performers carry out their street performances in the open air. They take place in the Universiade Park every day from July, 7 to July, 17, and it’s worth seeing. In general, the Universiade Park is a place you must visit to have fun. As for the tickets to the competitions, each of them allows to use public transport – buses, trolley buses, trams and the metro – free of charge at least all day long.

Today in Kazan more than a thousand kinds of products under the brand of the World Student Games are sold: soft toys, jewelry, glassware, sports clothes and accessories, watches, food products and other goods. They are produced by the event sponsors and companies that received a special license from the Directorate of the Universiade. You can buy them in special branded stores that are situated at the sports facilities and the Universiade Village. But they usually think about souvenirs on the last day. Before the start of the tournament, all SAMBO athletes’ thoughts are aimed at bringing home the most memorable souvenir – a medal of the World Student Games. Quite a bit of time is left until we find out who will meet the challenge successfully.