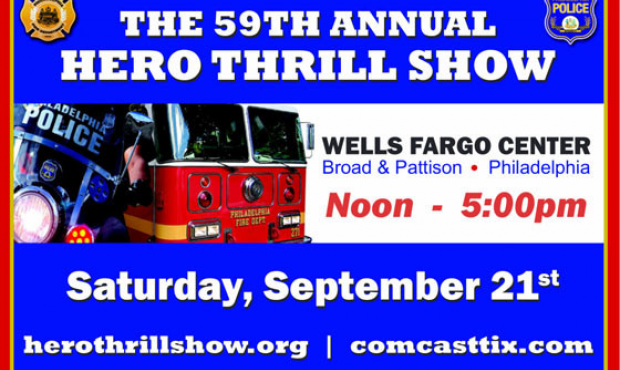 The history of the Hero Thrill Show dates back to the middle of the last century ? distant 1954. The show is traditionally held at the Wells Fargo Center, Philadelphia, a famous sports and entertainment arena, the home of the hockey Philadelphia Flyers, the basketball Philadelphia 76ers and the box lacrosse Philadelphia Wings. The mission of the event is simple, but topical and far-reaching: to raise money for the families of Philadelphia police officers and firefighters killed or severely disabled in the line of duty. The show was closed in 2005, but restored in 2006 when James J. Binns, a lawyer in practice for about a half-century and the USA SAMBO Inc Federation President, chaired the event.

The new chairman has breathed a new life into the event and given it a jolly spirit of a big day and a great sweep of a modern show. Today, the Hero Thrill Show that brings together about 50-60 thousand people from Philadelphia and tourists from all over the world reminds a Sunday fair, but the one of great social significance.

The show features demonstrations of the real-life police and firefighting drills, live music, competitions, and games. Among most popular and awaited entertainments are extreme driving by the Philadelphia PD Bicycle Stunt Team and the Highway Patrol Motorcycle Drill Team, as well as performances of the firefighters and dog handlers of the Philadelphia Fire Department.

SAMBO made its debut on the Hero Thrill Show in 2010. That year the beauty and application of the “self-defense without weapons” was presented to public by the young SAMBO wrestlers, members of the Yawara Force Club headed by Mikhail Kozitsky, international master of sports in Judo, master of sports in SAMBO, and the USA SAMBO Inc Federation Vice-President.

This year, at the 59 Hero Thrill Show, on September 21, 2013, SAMBO will be demonstrated by the International SAMBO Federation Team. Its members, masters of sports in SAMBO Ivan Morozov and Alexander Perepelyuk, can be called real Russian James Bonds after their splendid presentation of our martial art at the 75 Anniversary of SAMBO at Kensington Palace, UK.

Today the team has taken a morning flight from Moscow to New York to be on time for tomorrow’s grand show. After the event, the sportsmen will hold several workshops for the cades of the Philadelphia Police Academy and local SAMBO wrestlers. Despite of the intense schedule filled with workouts and performances that does not leave a spare minute, our masters have answered our request and will keep the record of their trip, so that we can inform you on the latest events in Philadelphia.

We welcome you to follow the news, photos and videos on the American adventures of Ivan Morozov and Alexander Perepelyuk this week-end on our website!