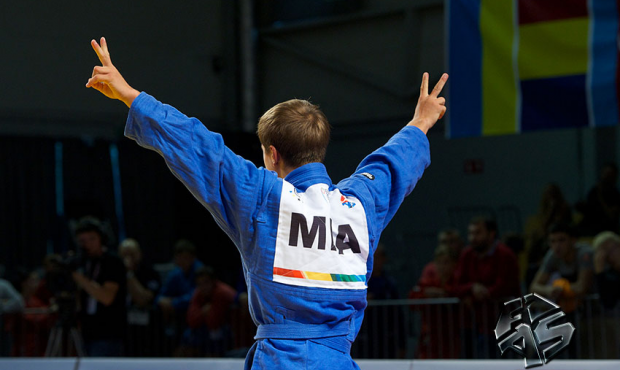 On September 14, in the Olympic Sports Centre in Riga (Latvia), athletes aged 15-16 fought to determine the best SAMBO wrestlers of the Old World in ten weight classes. As the first medallists have been set, visitors of the tournament in Riga and online followers enjoyed glorious matches full of emotions and youth minimalism as well as considered tactical combinations and splendid throws. Here is a report on joys, sorrows, disappointing traumas, twists and turns of the Championship right from the capital of Latvia.

The first finals of the Open European SAMBO Championship among cadets started with a solemn Opening Ceremony, attended by the President of the European SAMBO Federation Sergey Eliseev and a member of the Riga City Council Maxim Tolstoy. The ceremony began with a spectacular drum sequence and a colourful performance with the national flags of the competing countries, presented by the Todes dance company from Riga. Then the high guests greeted participants and delivered their welcoming speeches. Honouring of the Latvian SAMBO wrestlers, related to the 75-year anniversary of SAMBO, became an important part of the ceremony. This was the moment to acknowledge hard work of the sports veterans who have dedicated their lives and achievements to the development of SAMBO in Latvia. The President of the European SAMBO Federation Sergey Eliseev and the Head of the Latvian SAMBO Clubs Association Vsevolods Zelonijs awarded Certificates of Appreciation to Vladimirs Tokmakovs, Sergejs Velikotnijs, M?ris Laibins, and Jurijs Nikitins. These glorious sportsmen, the pride of the Latvian SAMBO movement, later participated in the awarding ceremonies of young wrestlers.

Ten finals and ten medal ceremonies of the first day passed quickly as competition was so exciting and intense. The hosts of the tournament, the Latvian team, had two chances to win “gold”. The first try was made by Aiga Berzina, 52 kg weight class, who competed against Daria Zimarina from Russia. The Russian athlete was obviously physically superior to Aiga so was she in the aspect of the wrestling technique. Daria executed a 4-point over the back roll and a lock at the beginning of the match, and added a 4-point inside grip at the end, finishing the battle with an overall score of 12:0, thus, bringing a gold medal to the Russian haul.

There was another memorable final, featuring a female Latvian SAMBO wrestler which also did not become “gold” for Latvia. Viktorija Vasiljeva, 60 kg weight class, pitted against Tatiana Samokhvalova from Russia. Tatiana won the match due to several leg pickup throws, executed with amplitude, strength, and fly, followed with a grapevine throw. Her Latvian counterpart showed grit and at some moment took a point back, but, of course, that was not sufficient. The result is: Russia earns gold; Latvia stays with 2 silver medals. However, tomorrow the hosts of the Championship will still have a chance to change the situation and improve their last year’s team achievement. As we have reported, 2 silver medals was the result of the cadet national team of Latvia at the 2012 SAMBO Championship in Estonia.

An exciting match was observed in the 72 kg weight category, where Aliaksei Azhel from Belarus overcame Iurii Bozha from Russia. The Belarusian cadet demonstrated a phenomenal and so uncommon for his age “second temp wrestling” and counter-attacked his opponent’s pickup throw with a spectacular side-to-side. This brought victory to him and the first gold medal to Belarus.

Another dramatic competition to recall was in the lightest male weight class of up to 42 kg: Giorgi Niazarashvili, Georgia, versus Anushervon Nazarzoda, Russia. One minute before the end Giorgi is 1 point ahead his rival, having carried out a successful hold throw. It is obvious that the Russian opponent wants to take Giorgi down and gain control over the situation. As we will find out later, the Georgian coach has advised his cadet to avoid it at all cost. Yet, at the last minute Anushevron finds a way to sweep Giorgi off feet and immediately locks his calf muscle, performing a canary hold. Submission, referee’s whistle, and Russian opponent’s victory. Giorgi stands up through the pain, as he has struggled till the very end, and the coach helps him to leave the carpet. Later, the athlete accepts his medal but in a medical room, not at a victory podium. Yes... this is sport: wounds will heal up, and Giorgi will learn his lesson. We are sure that in future there will be many occasions to see this Georgian sportsman of a distinguished stand, courage and character on the podiums at cadet and grown up tournaments.

The Bulgarian team was represented by only one contestant — Boryana Borislavova, 70 kg weight class. One contestant, one gold medal: a hundred percent result. Borislavova won her final in less than two minutes, as she took her opponent down and executed a painful arm lock. Tomorrow her team members will try their best to take her “medallic start” further on.