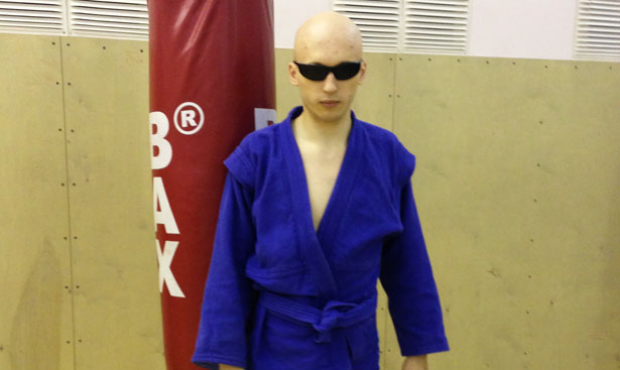 It’s no secret that people who don’t have vision sense (blind) are considered enigmatic and mysterious, unlike other people with disabilities. This, unfortunately, is the merit of literature classics, and I want to dispel the fog of mystery. So, Dmitry Klyukvin!

Note. Dima was born in 1988, totally blind from birth, he studied at the specialised correctional school No. 1 in Moscow. At the age of 16 he became the winner of the citywide competitions in physical training. From 18 year old he practiced blind football professionally (category B1, Paralympic sport). Playing on Moscow team for 5 years, he became a four-time champion of Russia, a double winner of the President Cup, Master of Sports in football. He graduated from the Russian State University of Physical Culture and Sports. He hosts a program “Obstacle Course” dedicated to disabled sport at the Ransis Internet Radio. From 2013 he has begun to go in for SAMBO at the Club named after Latyshev (city of Moscow) under the guidance of Master of Sports in Sports and Combat SAMBO Igor Antonyuk.

We got acquainted with Dima in 2009 not in the wrestling gym but on the field for mini-football, adapted for blind players. Then I trained myself in SAMBO and football in parallel. In my opinion, these two sports are similar in that you should respond promptly both on SAMBO mat and on the football field. Indeed, in the case of an error in SAMBO you’ll miss a painful hold, and in football you’ll miss an opponent from the opposing team, and a goal will be failed. In football, as well as in SAMBO, you can’t be afraid, and most importantly – you should listen carefully to what the coach and a goalkeeper of your team suggest you. You also need to listen to tips of your mentor carefully during the fight on SAMBO mat. The most important difference, in addition to the specifics, is that football is a team sport, and SAMBO is an individual one. In SAMBO fight on the mat all depends solely on your own!

They believe mistakenly that Sports SAMBO – is a traumatic sport. At the football tournaments I personally got a lot more injuries, a broken nose and sprains and all sorts of leg injuries received in collisions during the game. At SAMBO training sessions I’ve never got that! Traditionally I want to write Dmitry’s answers to my questions as well as the opinion of his coach Igor Antonyuk.

Roman: Dima, why did you retire from football and get into gear of SAMBO training sessions tightly?

Dmitry: To be honest, I wasn’t satisfied with the procedure of football training sessions. We didn’t have a training system itself, and our Russian blind football national team doesn’t have success without it at the international level. In SAMBO I began a new stage of development, at the Club named after Latyshev there is a fundamentally different approach to the training process there! You literally crawl out of the gym after the training session, and it’s an indescribable thrill!

Roman: Dim, as far as I know, you’re the only blind SAMBO athlete at the Club named after Latyshev. What kind of relationships do you have with the children and the coach?

Dmitry: First, I want to thank the Moscow SAMBO Federation for having helped to find and get into SAMBO Club close to home! I have good relationships with the guys. At the line-up, when I came to my first SAMBO training session, Igor Anatolyevich announced everybody that they will train with the blind. It immediately strikes the eye that SAMBO is one happy family and no matter what disabilities you have. They help, prompt, direct where it is necessary. At training sessions Igor Anatolyevich, of course, demands from me to a high standard. Something I practice with him, but something – with teammates or other coaches of the club.

"It immediately strikes the eye that SAMBO is one happy family and no matter what disabilities you have".

Roman: Where is it more difficult to train – in football or SAMBO?

Dmitry: Sometimes it is difficult here and there, it all depends on the coach. There are certainly more loads in SAMBO, as here you need to have good physical shape. In football, you need basically to listen more to understand where the ball is, etc. Walking distance to the Club named after Latyshev plays a big positive role for me. It wasn’t so in football, I had to go relatively far away for training sessions, but I didn’t always manage to find an accompanying person. It is easier with SAMBO Club, everything is close by and I manage to attend training sessions without any problems.

Roman: You’ve probably already known that the Moscow SAMBO Federation is preparing the third Open SAMBO Tournament “Preodolenie” among the disabled in May this year. Do you plan to perform?

Dmitry: I can plan a lot, but the coach Igor Anatolyevich will decide. If he says that I’m ready to fight, then I will participate.

Dmitry: Yes, I plan to, but there is still much work to be done ahead. And I hope a lot that SAMBO will enter the Paralympics – I plan to take part in them!

"And I hope a lot that SAMBO will enter the Paralympics – I plan to take part in them!"

And a few questions to the coach

Roman: Igor, I want to know from you about the success of Dima Klyukvin, he’s the only blind SAMBO athlete at the Club named after Latyshev. Is it difficult to train a man completely devoid of vision sense in SAMBO? What are the difficulties?

Igor: Of course there are some difficulties there, I had no contact with blind athletes before. I have to explain him everything literally by your toes. At first I put his feet as they should properly stand to make a throw. In general, we learn interaction from each other, but it is clear that he is trying very hard and he has perseverance. When I was approached from the Moscow SAMBO Federation with a request to take Dima, I thought long of how to organise such athlete’s training. But after I visited the Moscow SAMBO Championship among the disabled in 2013, many questions have disappeared by themselves. I personally saw how the blind fight in SAMBO. Therefore, I had already had an idea of the possibilities of blind SAMBO athletes, and it became clear what I need to demand from Dima.

"In general, we learn interaction from each other, but it is clear that he is trying very hard and he has perseverance".

Roman: SAMBO Tournament “Preodolenie” among the disabled will be held in Moscow in May this year, do you plan to release Dima on the mat?

Igor: Let’s see if he is in good shape for performance closer to May, then we will certainly participate in.

Roman: Igor, thank you for the interview. I wish you success and sports victories!