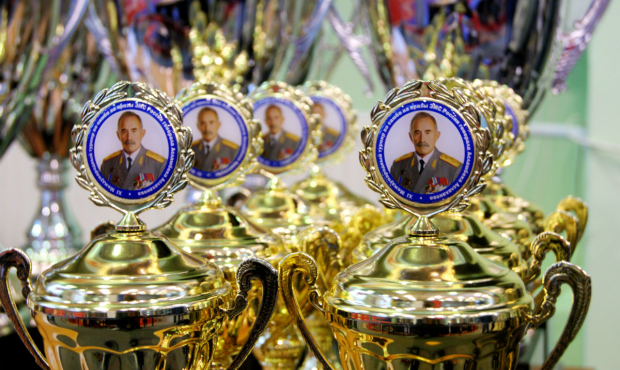 The results of the World Cup Stage for the prizes of A.A. Aslakhanov were pooled in Moscow. 8 sets of medals, for 4 in men and women, were set in the second competition day for sporting SAMBO. In contrast to the first day when only SAMBO practitioners from Russia and Belarus wan, this time the representatives of 5 countries got on the highest stage of the podium alternately. And Romanian SAMBO practitioner Euzhenia Kostake who became a winner of the gold medal in the weight category up to 68 kg made the main sensation.

When the main part of the tournament was ended, the unique friendly match between select teams of Russia and the other world started on the mat. The other world team was represented by SAMBO practitioners from Belarus and Ukraine. The battles were hold in the most showy heavy weight categories, starting from the weight up to 74 kg. The team-winner was determined by the results of 5 battles.

The composition of both symbolic select teams was unusually impressive, however the Russian SAMBO practitioners became the strongest in the end. The final score of the match meeting was 4:1 in favour of the Russians. The only one who could win the Russian select team was Belarusian Yuriy Rybak. This together with the golden medal of the official part of the tournament gave grounds to admit him the best sportsman of the tournament, SAMBO practitioner from Bulgaria Maria Oryashkova became the best sportsman in women.

Besides, the participants of the tournament the representative of Armenia Ashot Danielian as well as Romanian Euzhenia Kostake the girl who made the biggest sensation of the competitions were awarded the prizes For Will to Victory. The SAMBO practitioners who spent the shortest time on the victory did not leave without awards. Russian Ilya Kokovich and Diana Alieva were honoured the special prizes For the Shortest Battle.

– Next year our tournament will be held in my native country in the Chechen Republic, – stated Aslambek Aslakhanov during the closing ceremony of the tournament. – The President of the Republic Ramzan Kadyrov has already announced it. I can assure all the sportsmen that their coming to Chechnya will become a great holiday for the whole inhabitants of the republic, and they will have an opportunity to get personal evidence about Caucasian hospitability. Many people in the world consider Caucasus to be a hot point but it’s not true. Moreover, relating to sport. The inhabitants of the Chechen Republic treat sportsmen representing different kinds of sport with great respect.

We call your attention to the results of the second competition day.

The final results of the XI International tournament for the prizes of A.A. Aslakhanov, World Cup Stage, are available for downloading by the link: RESULTS.