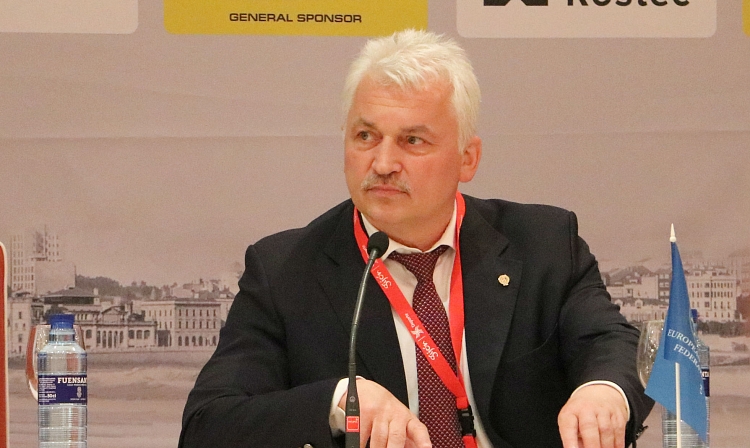 - Sergey Vladimirovich, what was the congress devoted to?

- Every year we hold a congress of the European SAMBO Federation to sum up the year. We analyze the past period, we work on errors. Today we tried to focus on those events that were held by the national federations. We noted the work of those of them who show themselves brightly. I especially want to highlight the progress of the Czech SAMBO Union, which has achieved significant success in its work over the past three years.

- Certain changes have occurred in the composition of the governing bodies of the ESF...

- Due to objective reasons, the Executive Committee of the European Federation has undergone some changes and therefore we had to conduct by-elections. I am very pleased that one of the new members of the ESF Executive Committee is a woman - the general secretary of the Czech SAMBO Union, Anna Korchagina. For us, this is important both from the point of view of the effectiveness of this specialist, and from the point of view of the development of SAMBO in the international sense.

It must be said that we accepted the woman to the governing bodies of our continental federation not for show, but to increase the efficiency of the European, and therefore International Sambo Federation.

- Are there any innovations in the organization's regulations?

- International Sambo Federation has adopted new regulations, so we, as part of it, have brought our own into compliance. We discussed changes, additions, and, well, we devoted time to financial discipline, which is now becoming particularly relevant.

- It became known that the European Championships 2020 will be held in Ekaterinburg (Russia). What is the reason for this choice?

- When we came out with the initiative to hold the European Championships in Russia, we initially had several candidate cities, and very large ones, such as Moscow, Kazan, St. Petersburg, and Cheboksary. But while discussing the selection criteria, we came to the conclusion that this should be a city, firstly, interesting from the point of view of expanding geography, and secondly, capable of holding high-level competitions.

Ekaterinburg, which is located at the junction of Europe and Asia, immediately caught our attention, firstly, because it has tremendous experience in the development of SAMBO, and secondly, we received support from the administration of the region, which is also of great importance.

Plus, at present, a foundation has been laid in Ekaterinburg for the construction of a SAMBO palace with a capacity of 1,500 people with two large halls, a hotel and all conditions for athletes and team members. In Ekaterinburg, we will be able to organize free accommodation and meals for athletes.

- So this is both the expansion of geography and the confidence that the tournament will be held at a high level from the point of view of organization?

- If we do something, then we should do it well! We have no right to lower the bar, because we have reached a level where the conduct of a tournament must be almost flawless. If you do, do it well, or do not do it at all!