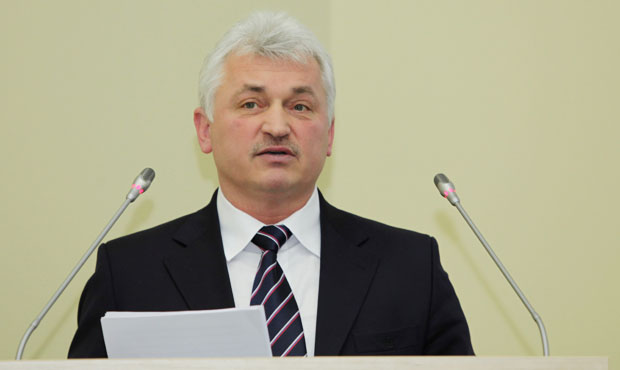 The Report and Election Conference of the All-Russian Sambo Federation (ARSF) was held this March 6 in Verkhnyaya Pyshma, Sverdlovsk region (Russia). Representatives of 47 accredited regional sambo federations attended the session. The major result of the event was re-election of Sergei Eliseev as the President of the All-Russian Sambo Federation.

Let us remind that Sergei Eliseev has been in office of the ARSF Head since 2002. He is also the President of the European Sambo Federation and Vice-President of the FIAS. As the ARSF press office reports, Sergei Eliseev presented to the audience the four-year operation report of the federation. He demonstrated conspicuous facts confirming that sambo is gradually reaching the status of the national sport in the country and claims for the Olympic recognition.

Sergei Vladimirovich recalled what hallmark events were held in Russia during the four-year period, which important victories were won by the Russian sambo athletes in the international arena. The President’s report included information on the first sambo tournament ever at the Universiade-2013, on participation of sambo athletes in the I and II Sport Accord World Combat Games, on the 75th anniversary of sambo and the most respectable world championship held in the anniversary year.

The sambo geography extends, this martial art becomes popular in different corners of the world.

Sergei Eliseev drew special attention to issues of the worldwide sambo development. He stressed that dynamic positive changes have taken place in recent years thanks to active work of the International Sambo Federation headed by Vasiliy Shestakov. The sambo geography extends, this martial art becomes popular in different corners of the world. Therefore demand in qualified Russian specialists to promote our sports abroad increases. Even now coaches, judges, and trainers speaking foreign languages are required for work in different countries.

The President marked the main sambo development vectors in Russia and worldwide for forthcoming four years. The sambo promotion to the Olympic Games remains the top-priority objective. The successive steps for reaching this objective shall be the sambo inclusion into the programme of the Universiade in South Korea and programme of the European Olympic Games in Baku in 2015, holding the European Sambo Championship in Kazan in 2016, and implementing the project on the International Sambo Centre construction in Luzhniki, Moscow.

As for the internal Russian issues, Sergei Eliseev reported that the list of cities and towns participating in official all-Russian competitions have significantly extended for the last four years. “However it should be noticed that the role of the largest centers for holding all-Russian and international tournaments was taken by Moscow and Saint-Petersburg”, the President said.

“However it should be noticed that the role of the largest centers for holding all-Russian and international tournaments was taken by Moscow and Saint-Petersburg”.

Along with the numerous successful achievements and wins some sad moments also affected sambo in preceding years. Participants of the conference paid tribute with a moment of silence to Mikhail Gennadyevich Burdikov, the founder of the legendary sambo academy in the town of Kstovo, to sambo enthusiasts and founders of schools: in Rybinsk – Gennadiy Filippovich Shakhov, in Vladimir – Evgeniy Vasilyevich Chichvarkin, in Krasnoyarsk – Albert Mikhailovich Astakhov, in Podmoskovye – Aleksandr Ivanovich Popryadukhin, Hero of the Soviet Union, Master of Sports of the USSR in sambo, in Primorye - Viktor Aleksandrovich Sorvanov.

Memory about the sambo trainers and founders in Russia is very important for conservation of the traditions and the younger generation upbringing. Sergei Eliseev noted in his report that “future is impossible without past”. The monument to Oschepkov Vasiliy Sergeevich was established in 2012 in Vladivostok in order to memorise the sambo founders. In 2013, in Moscow, the grave of Viktor Afanasyevich Spiridonov was found following the long-term search in the Vagankovo cemetery and the monument designed by sculptor Rukavishnikov was established.

In the final part of the event the ARSF President expressed gratitude to heads of regional divisions, coaches of Russian national teams, and all specialists for their contribution to the sambo development, and handed out anniversary awards devoted to the 75th anniversary of this sport.

As early as tomorrow the official part of the events in Pyshma will be replaced by the sporting one. The 64th Russian Sambo Championship among men will take place from March 7 to 10 in Verkhnyaya Pyshma. The competitions are expected to gather participants from all regional sambo federations – sportsmen from 76 territories, regions and republics. This means that interesting news from Verkhnyaya Pyshma will be published on the FIAS web page rather soon.