The Seychelles won for day 3 of African Sambo Championships 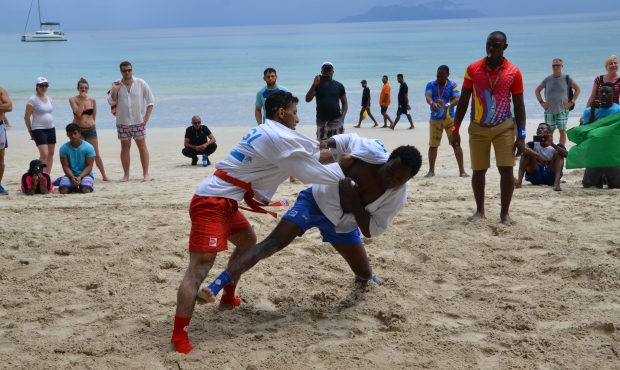 Demo fights in beach sambo were held for day 2 of African Sambo Championships, which were hosted by the Seychelles from May 12 to May 14. The fights were held in two weight categories: under 74 kgs and under 90 kgs. The representatives of four countries: Morocco, Cameroon, Tunisia and the Seychelles took part in the mini tournament. The general sponsor of the tournament is Rosneft Oil Company.

The first to come out on the sand of the Beau Vallon beach were sportsmen in middleweight category. After fierce competition in the final fight Cameroonian wrestler Yannick Mezepo defeated Moroccan fighter Abderrahim El Kars, having conducted a scoring throw, which is considered sufficient for victory in beach sambo.

Moroccan sportsman Hussain Al Shakkiri and Seychellois sportsman Derrick Cruise met in informal finals of under 90 kgs weight category. Right in the beginning of the fight Cruise achieved the second victory for the national team of the Seychelles at African Sambo Championships, having performed a spectacular throw.

Beach sambo competitions are held on a beach. The key difference from traditional sambo is that the fight continues until the first successfully conducted throw.

The conclusion of the demo tournament was marked by celebrating the victory of the Seychellois sportsman, the local audience did not want to let him go for a long time. Fan appreciation of the winner was accompanied by loud music and national dances.