The story about how SAMBO came to Nicaragua 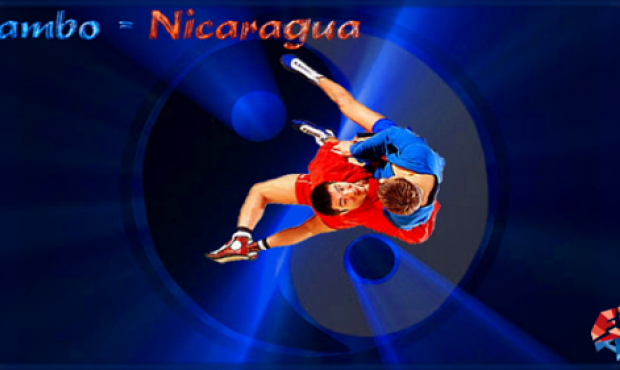 Earlier this year, Amaru Flores, a young man from El Salvador, arrived in the capital of Nicaragua – the city of Managua. He arrived for a reason, with the responsible mission: Amaru was going to come into contact with various social and sport organisations to develop SAMBO in Nicaragua. For many years he has been involved in the sport in San Salvador under the guidance of Master Gennady Galves. At that time Amaru wanted for SAMBO to become well-known in Nicaragua – the country where he was born.

The first, whom the young SAMBO enthusiast managed to come across was Valentina Paredes Silich representing the RUSÁNIKA organisation. This organisation unites citizens of Soviet origin in Nicaragua as well as the Nicaraguans, who studied in the Soviet Union and Russia. This meeting was decisive for the development of SAMBO in Nicaragua. A well-known agitator of different sports Carlos Peres was Secretary of the RUSÁNIKA Governing Board at the time. In addition, as part of the organisation’s Youth Commission consisted of an outstanding university female judoist Oksana Gonsales (Bondareva), and several martial arts practitioner Daniel Paredes Silich. It is this team together with the initiator Amaru Flores who began to promote SAMBO actively in Nicaragua.

In a short space of time the relations were established with Gennady Galves in Salvador, as well as contact was established with the FIAS Development Director Andrey Moshanov. The external support was supplemented by the support within the country. Sports Director of the Central American University in Managua Amaru Canales announced its readiness to assist the development of SAMBO far and wide in Nicaragua. As a result, one of the first steps was carrying out of the first SAMBO seminar and an invitation of the FIAS specialist Tigran Karhanyan to the country.

– In record short time, thanks to the FIAS strong support, SAMBO seminar was hold in Nicaragua, – says Carlos Peres. – In late February more than 60 athletes and coaches from all over the country had been mastering the science of SAMBO for 4 days. After the seminar they started speaking seriously about the sport in such cities as Corinto, Jinotepe, Ciudad Sandino and, of course, in the capital – Managua.

The coaches, who had completed training, immediately began to recruit groups to practice SAMBO in their cities. It’s interesting, that athletes representing different types of combat sports, acclaimed the offer to become SAMBO athletes enthusiastically. The popularity of mixed combat sports is enormous in Nicaragua, and SAMBO never better contributes to the success in the discipline. Athletes from various martial arts judged the sports, new for them, on its merits and began to run into SAMBO massively. Assessing the Nicaraguans’ interest in this combat sports, local experts say with certainty: SAMBO came to Nicaragua to stay.

– With the support of the International SAMBO Federation, especially at the hands of Mr. Andrey Moshanov, SAMBO in Nicaragua quickly overcomes the main obstacle to its development. We started from scratch, without coaches or athletes who would be involved in this sport. And FIAS provides an opportunity for our coaches to learn from the SAMBO masters of the international level, – continues Carlos Peres.

These words are confirmed by the next step, which was made in the development of SAMBO in Nicaragua. Coaches Jose Lanus and William Talavera attended the International SAMBO seminar held in Mexico City. Thus, the Nicaraguan professional coaches got on with improvement of methods of SAMBO, to which they devote most of their time now. After all, this work will allow transfer all the gained knowledge to their learners.

At present the legal work to establish the Nicaraguan SAMBO Association and Federation is in hand. This work requires a compliance with many formalities, as well as collecting a number of documents. Besides, to create a sport federation, the consent of the People’s Assembly and the Ministry of Internal Affairs of Nicaragua is required.

Alongside the paperwork the preparations for the Pan-American SAMBO Championship are under way. A group of 20 athletes is actively training to represent Nicaragua at the continental tournament in Panama City, which will be qualifying for participation at the SportAccord competitions. There are 5 women and 8 men in the national team in Sport SAMBO, and the national team in Combat SAMBO will be represented by seven athletes.

– The main purpose of the Nicaraguan SAMBO athletes is the experience accumulation at these competitions for young coaches from different cities and clubs then can transfer this experience to their learners, – says Carlos Peres. – The Nicaraguan delegation is headed by the Central American Judo champion Saira Laguna. And our team consists of the most ambitious young sportsmen and sportswomen who have accepted the challenge to represent the country at the competitions of such demanding sports as SAMBO. Although we can’t even predict if we have any chance of medals, we are sure that the Nicaraguan girls and boys will devote all their strength on the mat to compete for places on the podium.

P.S. You can find more information about Sambo in Nicaragua on their Facebook page.