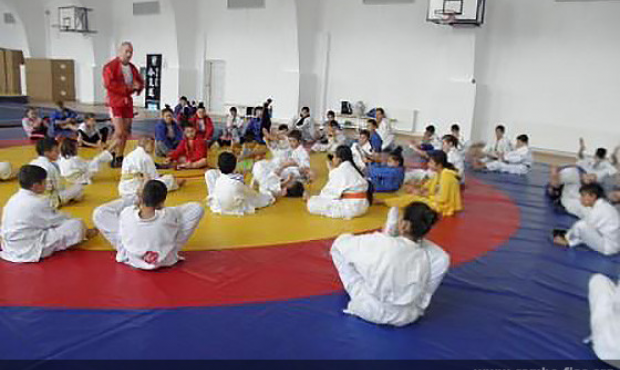 Such school subject as Safe Falling Technique is not included in the school curriculum yet. However, the Romanian pupils have already acquired some knowledge of it. More than 120 children from various counties of the country participated in the project “Learn to fall in the right way” which was held in Bucharest during the month. Consisting of three stages, at first the project let them learn about safe falling, then acquire necessary skills, after that the best of the best ones took part in the competitive part of the program.

No man is impervious to falling, but one can insure from falling injuries. The main thing is to know how to fall in the right way. This is one of the principles which form the basis of a special training program of FIAS. It is based on the mandatory and essential element of SAMBO – safe falling technique. In the first place people, who came to SAMBO, learn and comprehend this particular science. Now thanks to the FIAS program all comers can learn the basics and prevent injuries when falling.

The Romania SAMBO Federation project called Learn To Fall In The Right Way for school-age children based on this program had generated a lot of interest and attracted participants from across the country. At first guys completed training, and then for 10 days (from 1 to 10 of November) acquired the skills of safe falling. At the same time those guys who had previously practiced any kind of combat sports, delved into the study of SAMBO holds.

It is noteworthy that the project is carried out by the Romanian SAMBO Federation together with the Ministry of Youth and Sports of the country in the Pierre de Coubertain – Education In Terms Of Sports. Selection, Preparation And Sports Competitions Program. A gym for training sessions under the second stage was given by the Rapid Sports Club, which is a departmental club of the Ministry of Transport of Romania.

A few weeks later the project participants changed their place of dislocation and moved to the gym of the Mircea Eliade Lyceum, where the Romanian SAMBO Championships had already been held. From November 29 to December 1, there the third stage of the project took place – the competitions where pupils managed not only to consolidate their knowledge and skills, but also compete with each other to identify the most successful ones in this business.

– Our Federation participated in the selection of projects under the Pierre de Coubertain Program for the first time. The minimum number of points needed to qualify, amounted to 50. Our project was selected with confidence, having got 78 points, – comments on Viorel Ghyska, the President of the Romanian SAMBO Federation. – Today we are proud that SAMBO is involved in this program on a par with the Olympic sports. Representation of more than 120 pupils from different counties of Romania gives evidence of the rising popularity of SAMBO in our country, including among children. And it is particularly pleasing in the year of a great holiday – the 75th anniversary of SAMBO!