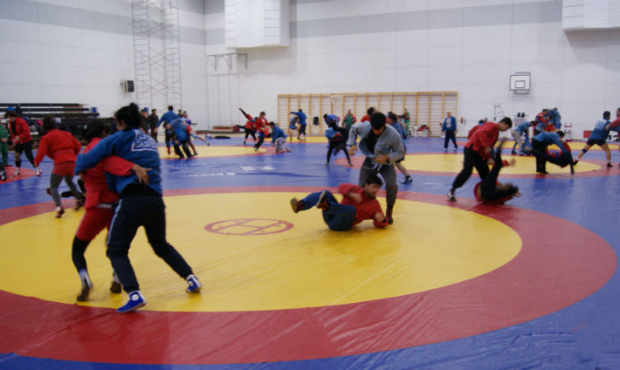 Who spent more time in Belarus before the World Sambo Championship 2012 than the Belarusians themselves? There are several answers to this question. SAMBO practitioners from Georgia, Kazakhstan, Turkmenistan and Lithuania arrived in Minsk on October 25 - two weeks before the start of the main event of the year. Together with a team of the tournament hosts, they held a joint training session at the Olympic sports complex "Stayki" located a few kilometers away from the capital of Belarus. Today Koreans and Japanese also joined them...

According to the host, initially they did not have the idea to organize a large-scale training session. However, representatives of different national teams took their own initiative creating necessary conditions for the best preparation for the tournament in advance.

– Representatives of teams were interested where the national team of Belarus is training, and, probably, in terms of adaptation, better training came to train in “Stayki”, – said Vyacheslav Kot, chief coach of national team of Belarus in an interview for FIAS site. – Gathering athletes from different teams is in any case good for SAMBO. Guys are talking, wittingly or unwittingly share some techniques, share skills. I think SAMBO can be developed only at such training sessions, when representatives from different countries can communicate with each other in training conditions, and not in a competitive extreme.

Holding the training session in Belarus prepares SAMBO athletes from different countries not only physically, but also psychologically. However, the ace of native stands’ support is still in the hole of the host team of Championship 2012. However, the team of Kazakhstan laid up its own joker. According to the representatives of the team, specifically for the support of their athletes about a hundred and a half of Kazakh fans will arrive in Minsk. Competition in the voice support in the stands is going to be hot!

Spectators may support any athlete; all of them still wait for the World Championship 2012 with a special feeling. The legend of SAMBO Fedor Emelianenko will come to the tournament. As FIAS site managed to find out from the famed fighter who has now become an advisor of the Minister of Sports of Russia, before the tournament he will be busy in the work of the Council on Development of Physical Culture and Sports under the Russian Federation President. But Emelianenko promised to be in Minsk on the opening day of the tournament, and will spend in the capital of Belarus all three competitive days. So autograph hunters will have something to do.

A surprise is expecting spectators of online broadcast at FIAS site. During one of the broadcasts Fedor will join the duo of our regular commentators Natalia Yuhareva and Vladimir Ivanitsky and give his assessments of what is happening on the floors. Of course, many fans had hoped to the last that Fedor himself will come out and show a real master class in the Championship combats. However, he decided to quit the professional career, as he stated during the presentation of the book "SAMBO is a science of winning."

We only know that during the last competitive day Emelianenko will be actively rooting for his teammate Kirill Sidelnikov, who will perform in combat SAMBO in the Russian team in the category of over 100 kg. Preferences of other fans are thoroughly known only to them. Decide yourself whom to support at the World SAMBO Championship, to the start of which there are only three days left.