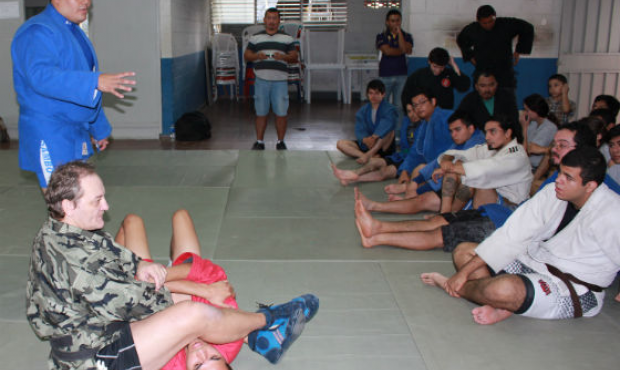 Cultural and economic cooperation between Russia and the Republic of El Salvador that have been restored not long ago has also opened new prospects for development of SAMBO. Its neighboring countries Nicaragua, Guatemala and Honduras can be also named here together with this country.

Central America has long been a place of military conflicts, the liberation movement for independence from Royal Spain and the civil war for socialism.

Successful relations between the countries of this region, i.e. El Salvador, Nicaragua, Guatemala and Honduras and the USSR were interrupted with the years of “perestroika”. But there has always been an interest in Russia, even in the most economically difficult years. Mutual affection and respect between the nations of Central America and Russia have not faded in time. Here many people participated in exchange programmes with Soviet universities and a considerable part of the population speaks and understands the Russian language.

In the course of the working visit of Andrey Moshanov, Head of the FIAS Development Department, to the Republic of El Salvador a number of fruitful top level meetings that were dedicated to development and promotion of SAMBO took place.

The prospects of cooperation in the sphere of SAMBO development both in this country and in the whole region of Central America were discussed at the meeting with Carlos Castaneda, Vice-Minister of Foreign Affairs in the Republic.

The issues concerning recognition of SAMBO as an official kind of sport in El Salvador as well as organisation and arrangement of National and Regional Competitions in the near future were discussed by Andrey Moshanov with Mr. Alejandro Mayer, Ambassador of the Russian Federation to the Republic of El Salvador.

The requirements for registration of new sports federations and their official recognition were discussed at the meeting at the Ministry of Sports in El Salvador. The key requirement turned to be the presence of the optimum quantity of qualified SAMBO trainers in the country who would well and truly develop this prospective type of martial arts there.

The whole practical seminar that was carried out by Andrey Moshanov was dedicated precisely to this issue, i.e. the issue of sports professionalism and pedagogical literacy of trainers. 52 trainers and sportsmen from El Salvador, Guatemala and Honduras enhanced their skills, knowledge and qualifications in SAMBO within two days. The sportsmen were represented by two most prospective audiences, i.e. students and military men.

Salvadorian SAMBO wrestlers enthusiastically welcomed the opportunity to participate in the Universiade 2013 in Kazan as well as in the II Combat Games in St. Petersburg.

Both official negotiations and the seminar drew a line under the diligent arrangements in recognition of SAMBO by the Olympic Committee of El Salvador. Now the final condition of the list of recognition requirements to the National SAMBO Federation of El Salvador has been fulfilled.

“Trainers that participated in the seminar possess fairly deep theoretical knowledge”, noted Andrey Moshanov, “some of them have degrees from the Cuba National Sports University (La Havana), and many of them study at the Central American University of El Salvador. They have proved to be familiar with the theory of athletic training; the SAMBO technique was not a “stumbling block” for many of them either. Almost all of them appeared to have adequate experiences in SAMBO-related martial arts”.

16 trainers from El Salvador, Guatemala and Honduras got certified on behalf of FIAS in the course of the seminar. It is they who will become SAMBO pioneers in these countries. And we can make a conclusion that traditional export of sugar-cane and well-known Salvadoran coffee will be joined by a countercurrent to El Salvador – import of international SAMBO with Russia as its motherland.