The Universiade in Kazan: the champions and winners of the second day of tournaments of SAMBO athletes are named 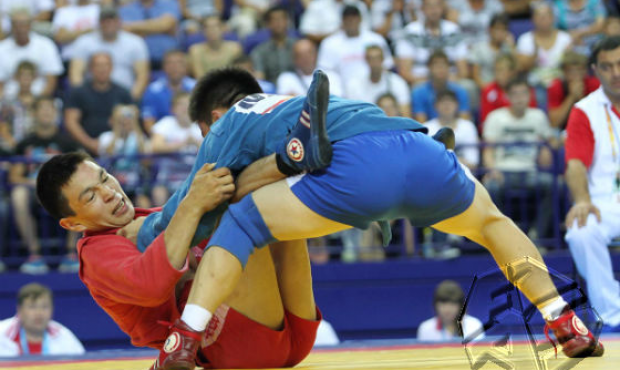 The final block of the second day of tournaments of SAMBO athletes in the Universiade in Kazan began with the fight in the weight category of 52 kg among women between the Russian Anna Kharitonova and the Ukrainian Inna Cherniak. The spectators were only preparing to watch the ups and downs of the fight when the fate of the “gold” was determined. It took only 15 seconds for Anna to make a 2-point throw, immediately transfer the fight into the mat wrestling and finish it with the painful hold of the leg. 15 seconds is a record of the short-term of the SAMBO fight at the Universiade in Kazan.

The second “gold” today is also added to the Russia’s collection. In a heavy and stubborn fight against the short and “slow” Mongol Maral-Erdene Chimmerdorzha the Russian Aymergen Atkunov won with a winning edge of 1 point.

In the next women's final the Israeli Alice-Hester Schlesinger measured strengths with the Belarusian Tatiana Tox. The Israeli athlete is a famous Judoist, a multiple winner of the World and European championships in this sport. In the preliminary tournament fights Alice-Hester caught the attention of the public and SAMBO experts with gorgeous hip-rolls - her favourite technique. And in the final she was at her best: 3 hip-rolls and the retention showed 12-0 on the scoreboard. And this is the first - and at once the gold! - medal for Israel at the SAMBO tournament of the Universiade in Kazan.

The next on the Tatneft-Arena carpet was the favourite athlete of the SAMBO World - Uali Kurzhev. He is loved by all - from the experts to the journalists, and not just because he is a multiple World and European champion, but mostly for the fact that he is “a player” on the carpet, he does not fight, he's playing, he enjoys the fight. The fights of Uali are always a delight to the eyes of the spectators. When Kurzhev fights one cannot but notice that he really enjoys fighting and shares it with the spectators very generously. In Kazan his fights were also spectacular and inspiring, and his gorgeous throws and retention in the final fights brought the “gold” of the Universiade, the third onr in the SAMBO collection of Russia for today.

The sensational was a fight in the weight category up to 80 kg among women. The whole match was dominated by the Bulgarian Tereza Zhurova due to her competent work for capturing and a technical throw of the leg hold which successfully “strained” the Japanese throughout the whole match. But SAMBO competitions in Kazan are rich in sensations, this day was not an exception. 6 seconds before the end the Japanese performed a hold of one leg and earned the winning score that brought her “gold”. And the national team of Japan, which has been developing SAMBO in their country only for the second year, became the owner of the second gold medal of the SAMBO Universiade.

In the weight category of 100 kg among men in the final fight of today the Belarusian Mikhail Matsko and the Israeli SAMBO athlete Peter Palchik came to measure their strengths. The fight of light heavyweight occurred to be spectacular, rich with sharp attacks and intricacies of tactical thinking. As the result, Mikhail was the best who won the first gold medal of SAMBO tournaments of the Universiade in Kazan for Belarus.