Universiade in Kazan: the names of the first SAMBO champions and medal winners have been announced 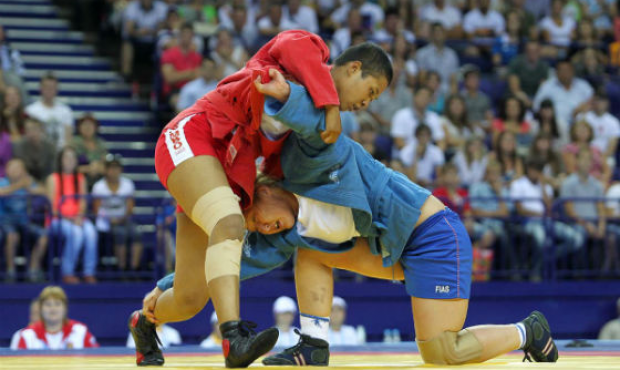 Today for the first time in the history of the student games SAMBO tournament took place at Tatneft Arena Sports Complex and as a result today, on July 14th, the names of the first SAMBO champions and medal winners of the XXVII World Summer SAMBO Universiade have been announced.

In the weight category up to 48 kg, the lightest among women, Elena Bondareva became the champion of the Universiade. She is an experienced athlete, multiple world champion, but before the Universiade, about 2 months prior to the student start, Elena had lost in the finals of the European SAMBO Championship to the young Bulgarian sambo athlete who had dispelled the myth about Elena’s invincibility. But here in Kazan Elena, who must have made serious and correct conclusions after her loss in May, left no chances to her opponent from Ukraine, Alena Kunitska. Elena needed only 1 minute and 4 seconds to perform a technical hook throw for a similar leg for 2 points, then she took 4 points more by having performed immobilization and at the end of this episode she managed to perform an effective submission hold by leg that resulted in the gold of the Universiade.

In the lightest category for men, which is up to 52 kg, Kazakh Beimbet Kanzhanov fought with a Sambo athlete from Armenia Tigran Kirakosyan who turned out to be stronger. Tigran, distinguished by a counterattack style of holding the fight, earned 2 points by having performed the ‘bull’ with the help of which he caught Kanzhanov at his own move. The rest of the points he received thanks to his activity and he ended the fight as a winner with the final score 4:1 and earned the gold of the student games.

The final fight in the women weight category of up to 60 kg, where Alena Sayko from Ukraine met Yana Kostenko from Russia didn’t manage to determine the winner during the stand wrestling. Kostenko won during the mat wrestling in a not very exciting but very effective way. She flipped the Ukrainian athlete over and caught her in hold. 4 points and the gold medal of Yana Kostenko went to the SAMBO team from Russia.

The following final fight brought one more gold medal to Russia. Denis Davydov won it for his country in the weight category of up to 68 kg. He won by performing only one throw after which the audience of Tatneft Arena sighed all together. It was a throw to the back from knees, ideal in time and place, with a wonderful foot pitch but with no control during the final phase of the throw. It brought only one point to Denis but this point became a gold one to him and let him rise onto the top tier of the Student championship in Kazan. Alexandr Koksha from Belarus won silver.

Further on in the finals of the weight category of up to 72 kg were between the athletes of the strongest leader team of modern SAMBO – Russia, and the most progressive SAMBO country of the modern world. Experience and traditions were against discipline and diligence. As a result, the athlete from Japan turned out to be stronger, after having performed a couple of throws, the last one of which she ended with a hold she won over the Russian athlete with the final score of 7:1. The Japanese ended up with the gold, sensational, but rather logical.

The first day of student SAMBO championship in Kazan ended with a fight in the men weight category of up to 90 kg. The fight between Pavel Rumyantsev from Russia and Komronshokh Ustopirion from Tajikistan was tough and hard. But one minute before the end the result of the fight was obvious. Pavel performed a great submission hold by arm, the athlete from Tajikistan tried until the end to get out of it with a straight arm. This hold brought gold of the Universiade to Rumyantsev. He rose onto the top tier where he stood for the first time in his life listening to the Universiade anthem that had played today at Tatneft Arena in honor of the champions of the student games 6 times. This wonderful anthem will play in honor of sambo athletes the same number of times tomorrow as well.

You will get a chance to listen to it at the same time and at the same place, at Tatneft Arena in Kazan or at FIAS official site at 4 pm Moscow time. SAMBo is waiting for you!