Universiade in Kazan: the gold and silver medal winners of the final day of the SAMBO tournament are named 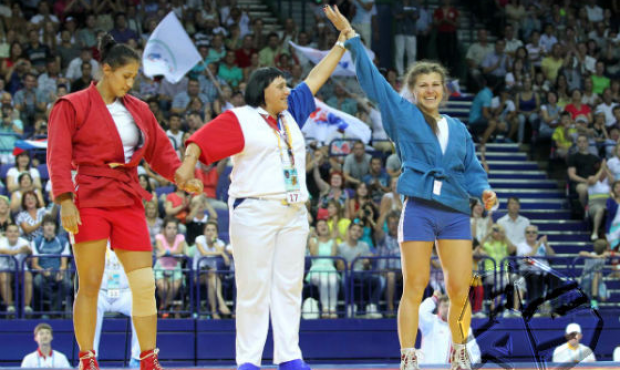 The final block of today on SAMBO mats of "Tatneft-Arena" started by the fight of women in weight category of 56 kg. The French Laure Fournier declared a long time ago in her interviews about her claims for the student "gold", and these claims were justified. Laure is the silver medalist of the European SAMBO Championship of this year. And in Kazan she was very close to the realization of her dream, leading in score almost a third of the fight, but... Belarusian Anastasia Arkhipova this day did not allow the "gold" to go to France. Firstly she equalized the score of the fight and then 4 seconds before the end, by the great over the back throw from the knees of 2 points, she left no chance to the French.

Also the Russian Ilya Khlybov left no chance to win to his opponent from Kazakhstan Bagdat Zharylgasov. Although the advantage of Ilya was minimal - only one point, but during the fight, he did not let the Russian fans doubt his victory for a moment. Every his action radiated confidence and thirst for victory, which he successfully and naturally gained.

The next fight in the weight category of 68 kg between the Ukrainian Louiza Gainutdinova and the Russian Marina Mokhnatkina lasted only 20 seconds. Having aimed at the Ukrainian, Marina already in the first “junction” effectively and efficiently transferred her opponent to parterre and, after her best-known action – painful leg lock, she won the gold medal of the Universiade.

In the weight category of 82 kg in the preliminaries of today the Russian Sergey Kiryukhin and the Georgian Niko Kutsia were the best. They met each other in a very hard and difficult evening fight to determine the strongest. And it was the Russian who "pressed" the Georgian the entire first half of the fight, and 2 minutes before the end he used an excellent "mill" hold that brought the 2-0 to the scoreboard. By adding one more point to this score, Sergey won and became the champion of the student games - the first in the history of SAMBO and the first in his sports career.

In the women heavy weight category it did not do without sensations, the Argentine Kessler Dacunha and the Russian Anastasia Kovyazina met in the final. After yesterday's "bronze" of Argentina the today’s final for this country was a real triumph. And though Kessler lost to the Russian sambist, but for her, her coach, and for the entire team of Argentina this "silver" is certainly akin to "gold".

The final fight of the SAMBO Universiade gave to all SAMBO fans the best that contains in this martial art: the drama, the tension of combat, spectacular and bright throws and crazy emotions. The heavyweights entered the mat of "Tatneft-Arena": Alexander Kuchumov whose weight is 120 kg and the Ukrainian Razmik Tonoyan of 112 kg. The guys were fine and athletic, without a gram of fat, and the most important thing is that in their eyes there were thirst for struggle and strength of mind. It is through this spirit, perhaps, that this fight was so bright and intense. Losing the entire fight with 6-0 the Russian could gather all his will and strength and having used two great throws, the last was the victorious – 1 second before the end of the fight! The "gold" of Alexander became a gift to all the spectators as the curtain of the SAMBO tournament in Kazan fell.

So, the final point of the sambist tournament at the Universiade was bright and spectacular like this. And it is certainly not without purpose, because all of those who supported and worked during these days on "Tatneft-Arena" in Kazan, unanimously stated that SAMBO is a sport that brings joy and celebration.