Universiade in Kazan: Gala-dinner of the International SAMBO Federation 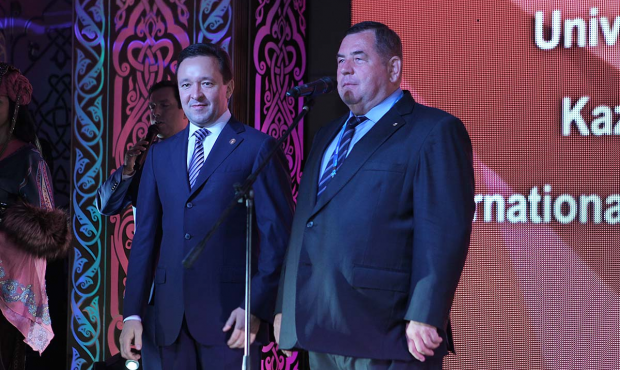 At the gala-dinner of the International SAMBO Federation, which took place yesterday at the restaurant "Timerkhan" in Kazan, lots of warm and capacious words were told about SAMBO, SAMBO people and many other things that in one way or another are connected with this martial art. The three numbers - 1, 75 and 100 were often mentioned during this evening. About their meaning in the context of SAMBO and many other topics you can read in our today’s report.

The gala-dinner of FIAS gathered more than 250 people, among whom there were distinguished guests, the Republic of Tatarstan Government representatives, the presidents and delagations heads of 44 National SAMBO Federations, the referees. The Republic of Tatarstan Government was presented by the first person - Prime Minister Ildar Khalikov, the Federations friendly to SAMBO was represented by the President of the Russian Wrestling Federation Mikhail Mamiashvili, the Russian Olympic Committee was presented by its Secretary General Marat Bariev, and the legendary school "SAMBO-70" delegated to Kazan its director Renat Laishev.

That evening, as well as the daily life all these people were united by many things, but the main thing that connects them is SAMBO. And love and devotion - love and devotion to SAMBO. Devotion - because, have got acquainted with SAMBO once, you can not forget it anymore and you remain its devoted fan for life.

Vasily Shestakov, the FIAS President, opened the gala-dinner: "I am pleased to welcome everyone here. All of us are united not only by the Universiade in Kazan, which is breaking all records of student competitions in organization and realization, but also by SAMBO. I would like to thank today all of those who put their souls into their work for the sake of SAMBO. Work without a soul is nothing. But I know that all of those who work with SAMBO and for SAMBO work with the soul. That is why the victories are guaranteed to us."

The Prime Minister of the Republic of Tatarstan Ildar Khalikov noted the importance of inclusion of SAMBO into the Universiade program in Kazan and wished to everyone the interesting and exciting fight on the final day of SAMBO competitions.

After the solemn words of the leaders of the FIAS and the Republic of Tatarstan Government there were more speeches, kind words and gifts.

The magic of numbers that evening was the following - 1, 75 and 100. 1 - because it is the first in history Universiade for SAMBO, and the first, as we know, is a priori bright, memorable and magical. 75 – our SAMBO is exactly of that age this 2013 year. And 100 - because the hundredth medal for the team of Russia - the hostess of the Universiade was won by sambist, Pavel Rumyantsev.

This is a magic of numbers. And we wish to all the SAMBO athletes, that for the students SAMBO the number "one" was incarnated into the number "two", which means, thereby, into the second for SAMBO Universiade which is to be held in 2015 in South Korea.