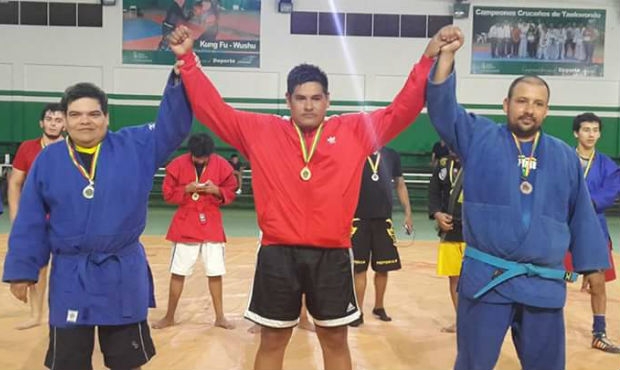 Sportsmen of both South and North Americas are actively engaged in preparations for the continental sambo championship that will be held from September 3 to 7 in Nicaragua. Recently a selection for this event took place in Bolivia where the II Open Sambo Tournament was held on June 27.

The competitions took place in the sports center "Santa Rosita" in the city of Santa Cruz de la Sierra and more than 30 athletes from Bolivia took part in them. Each of them tried to show the best of their ability not only to find the strongest ones in the country but also to win a ticket to the continental championship. According to the organizers, Bolivian sambists were supported by quite an impressive number of spectators, even considering the fact that all the sporting population of the continent was monitoring the American Football Cup then.

- I want to thank my entire team that helped me organize this tournament. It's nice that everyone tried to contribute to the common cause, - says the president of the National Sambo Association of Bolivia Samuel Vivancos. - It should be noted that among the winners of the tournament athletes will be selected to represent Bolivia in the next Pan-American championship in Nicaragua. As for the association’s plans, on July 8 our athletes and coaches will participate in a seminar on sambo organized jointly with the Uruguayan Association of Sambo. On August 15 Chile will host another seminar on sambo in the mark of the tournament dedicated to Fedor Emelianenko. We also plan to take part in it. Then the Pan-American Championship awaits us that’s a really important start.