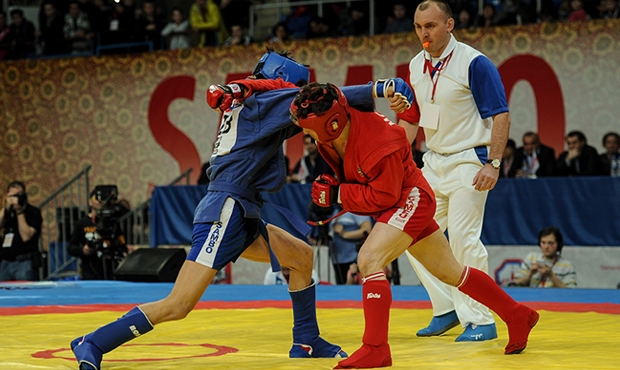 The third day of the A. Kharlampiyev Memorial World Cup was held on March 29 in the Druzhba Arena of Luzhniki Olympic Sports Complex in Moscow. FIAS web-site collected opinions, emotions and impressions of the tournament participants and present them for your attention.

Russian Anastasia Valova (up to 56 kg), whose duel with the representative of Kazakhstan Almagul Urangulieva opened the third day of competition, won quickly and fairly. She performed scissor takedown with the transition to the par terre position with subsequent submission hold, making the all spectators in the hall applaud with delight. 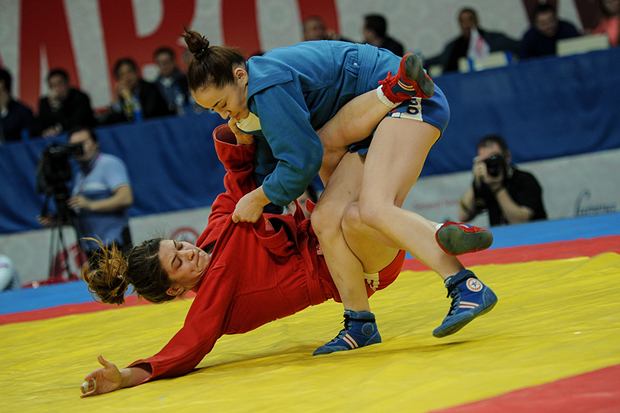 “My performance in the final was pure improvisation. Today I couldn’t manage to do anything according to the plan. I did not expect from myself so quick victory in the crucial duel, but I liked it. These were very challenging competitions; I have to particularly note a strong opponent from France,” told Anastasia in her interview to the FIAS web-site. “Some say that there were fewer participants, but apparently the really strongest athletes arrived. I am glad that my trainings were not in vain: I aimed at “gold” and got it.”

At the medal ceremony the winner of the “bronze” of this World Cup, French sambo athlete Laure Fournier was on the podium step below the Russian athlete. It was obvious that the athlete was not glad with the third place. 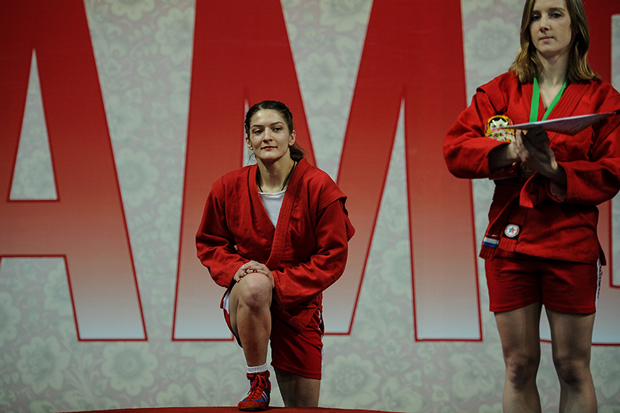 “I lost the duel for getting into the final to two-time European champion Anastasia Valova. And even 2 seconds before the finish, I’ve had the lead. Russian girl is a very good athlete; she has excellent par terre position and submission leg hold techniques. The whole duel I tried to control the situation, knowing and remembering her par terre position technique, but still I’ve lost the victory,” said the French athlete. “I think it's a question of psychology and tactics: the ability to hold the advantage at the moment when your opponent does her best to win. I and my coach will work on this part of tactical and technical training. Last year “La Marseillaise” played at the European Championship in Romania in my honor, these were unforgettable feelings. I would like them to be repeated at the continental tournament in Croatian Zagreb.”

And the representative of Spain, Marina Ramirez, neighboring with the French athlete on the third step of the podium, shone with her “bronze” brighter than “gold”. 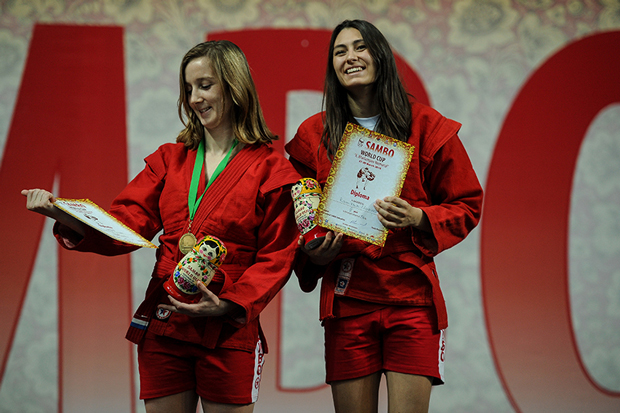 “Today I am totally happy; this tournament gave me unforgettable feelings,” admitted Marina in her interview to the FIAS web-site. “These are my second sambo competitions: first I recently participated in the national championship. I came to sambo from judo. If we compare these two sports, I believe that sambo is more attractive with relation to the opportunities for realization. At the same time sambo seems to me more strength sport. I'm interested in it, because it develops me as an athlete. The next start will be at the European Championship in Zagreb, where I also dream to get on the podium.”

The representative of Tajikistan, Hushkadam Husranov, experienced even more joyous emotions. At the World Cup he reached the highest peak — he won the gold medal in the weight category up to 62 kg. 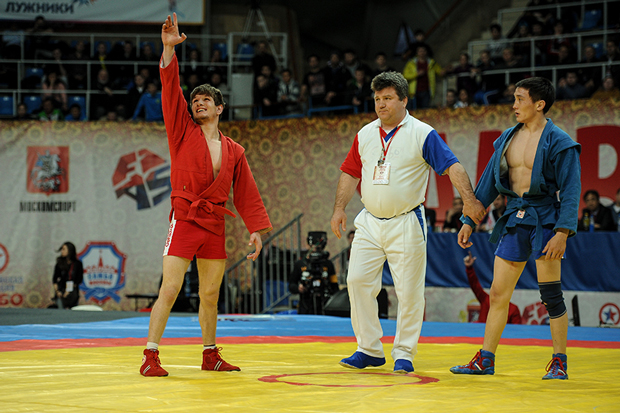 “On my way to the victory I had to wrestle with very strong opponents, each of them could get on the podium in the end. In 2013 at the Anatoly Kharlampiyev Memorial I became the third in the weight category of 57 kg, and this time I won the first place in the weight category up to 62 kg, and I would bring home beautiful Russian Matryoshka doll. Now I will prepare for the Asian Championship in Turkmenistan, and after it my goal will be the World Cup in Morocco,” told sambo athlete in his interview to the FIAS web-site.

Intensive final in combat sambo in the weight category up to 62 kg ended with the victory of Russian Uzair Labazanov. In his interview to the FIAS web-site the Sambo World Cup winner told what had helped him to achieve success: 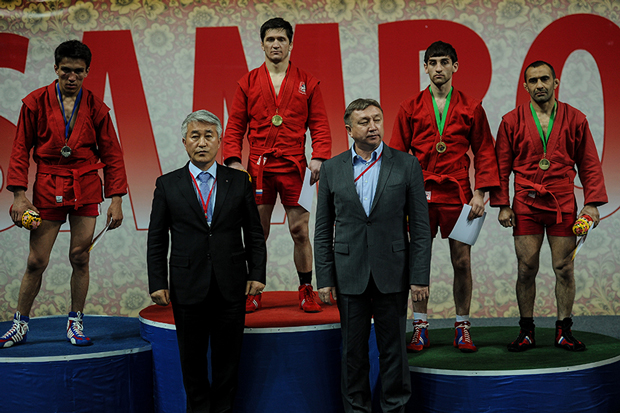 “The first minute of the duel was exactly as I told, I completely believed in me and in my success. But then the opponent managed to enforce me wrestle and even break down my breath. At that moment the verbal assistance of the coach helped — he advised me how to continue the duel. I really like to wrestle under the new rules, it is especially favorably that now you can win, getting an advantage of 8 points. The wrestle has become more interesting, more beautiful and more dynamic. In the middle of May, I will compete at the European Sambo Championship in Zagreb. And tomorrow I will start to prepare for this tournament. I am aimed only at the gold medal.”

Appropriate tactics and good knowledge of the opponent became the guarantee of the victory of the Russian sambo athlete Sergey Kiryukhin in the final of the weight category up to 82 kg. 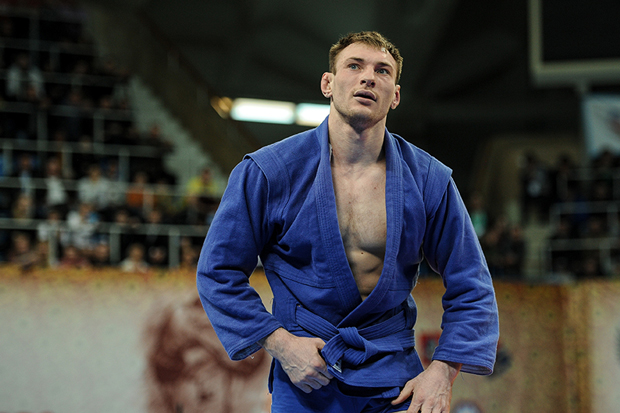 “The finale was hard. I and the representative of Belarus, Lesha Stepankov, meet on the mat not for the first time, we know each other long ago as athletes, so it was very hard to wrestle. I could manage to win only because of the tactics; we developed it together with my coach,” told Sergey Kiryukhin. “The wrestle style of the opponent I already learned well, so I try to use the same tactics: if I succeed, then we do everything right. Kharlampiyev Memorial was and still remains one of the strongest sambo tournaments. This year, due to change of conduction format, there were not so many participants, but really strongest athletes arrived. We can say that this year the Kharlampiyev Memorial was won due to the quality of the participants. Honestly, I wanted to buy Matryoshka doll, but I was lucky — I could get it by victory the World Cup. I began to use it functionally — I put the coach medal inside.”

The final in the combat sambo completions in the weight category up to 82 kg was exciting, Belarusian athlete Sergey Filomenko celebrated his victory then. 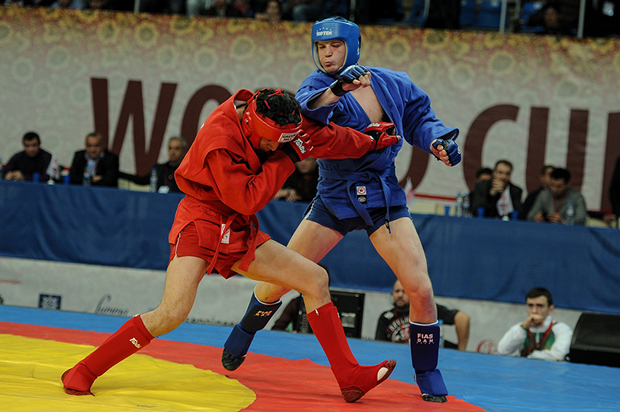 “I already participated in one sambo tournament, among them there are European and World Championships. I wanted to perform well at the World Cup, and I think I got this. I expected to meet the leaders of the Russian team, but at this tournament there were none of them in my weight, so I had a feeling of lack of the opponents,” said Sergey Filomenko. “Three years ago the Belarusian combat sambo finally got its own club, whereby the results on the international arena became noticeable. We could create a team; go to the large tournaments, often at our own expense. Everything goes slowly to that we have the result. My goal is to win the World and European Sambo Championship. For now I cannot manage to do it, but I train hard.”

USA representative Nina Cutro-Kelly showed bright wrestle in the weight category over 80 kg. She managed to win an athlete from Japan Haruka Murase, who was obviously more than American in size. 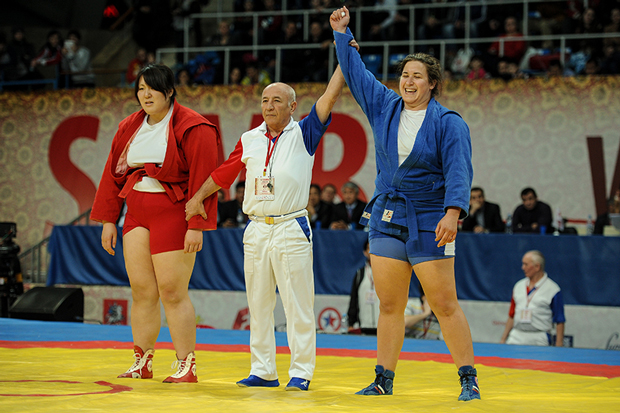 “My plan was to do arm submission hold. I'm a little shorter than my opponent, and I like to do submission holds. Last tournament in Moscow I won this girl, but she beat me at her home competition at the World Championship in Japan. So we knew each other well, and I was sure that if I had her arm, I could win. She has really good technique, and I could hardly manage to win with shots, so I used my chance in the par terre position,” said Nina Cutro-Kelly. “My second on the mat was representative of the French team. The fact is that I have dual citizenship, American and French. I arrived in Moscow without coach, and I asked one of my countrymen to help me. He really did it: when I was wrong, and my opponent to got points, my French coach told me how to change the hack. As a result, I could manage to move the duel to the par terre position and win. This support was just indispensible.”

Finally Nina half joking and half seriously told why she loved the A. Kharlampiyev Memorial Sambo World Cup:

“I live in Texas, USA, and we did not know there what the cold is. But I love cool weather, and early spring in Moscow with a penetrating wind allows me to feel it in full. So I am going to come next year to breathe fresh Moscow air and, of course, to wrestle for the Anatoly Kharlampiyev Memorial World Cup.”