“We feel a bit better in Kazan than at home” 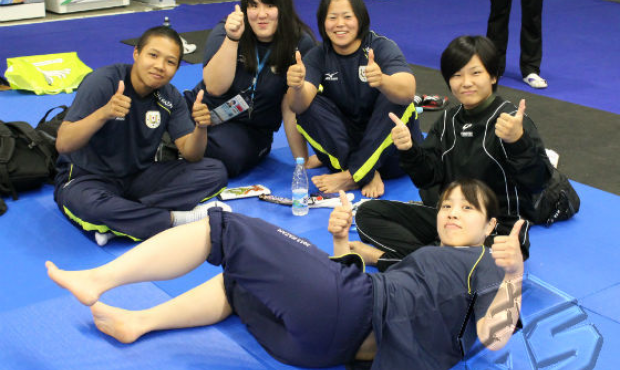 Acting abilities of SAMBO athletes, Dominican claims for the “gold” of the Universiade and the New Zealanders who have come in order “to show themselves and to take a look at others” – one can learn many interesting things before the SAMBO competition start in Kazan. Which one of the French sportsmen expects to achieve the maximal result, who has belted the double world SAMBO champion in the eye, as well as where the SAMBO athletes have met Vladimir Putin – you will read about this and many other news in the FIAS web site reportage about the day before the SAMBO début in the Universiade.

The Dominican SAMBO athletes feel well in Kazan, even without help of volunteers. The matter is that it was just these sportsmen together with their coach Eliseo Romero Dominguez who visited the capital of Tatarstan in December last year to participate in the Student World SAMBO Cup. In addition to the competitions as such, the warm-requiring Dominicans memorized the frost and snow which they saw for the first time.

“I remember that it was very cold but funny then,” recollects Gilbert Frankbel De Leon Puello. “At that time we tested our powers in the duel with strong competitors from around the world. But now I agree only for the “gold”. Naturally, I will not be upset if I take the second place, but now I seek the “gold” solely.”

There is a joke to a large degree in the sportsman’s words, and this is proved not only by his white-teeth smile, but also by the commentary of the coach who hasn’t heard his pupil’s speech.

“One may consider our participation in such contest to be a victory already. And to win any medal in the Universiade is a dream,” says Eliseo Romero Dominguez. 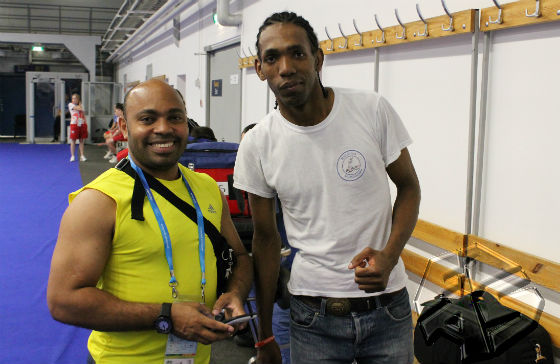 We meet more of our old acquaintances during the training. The French female SAMBO athlete Laura Faurnier made herself known in the world championship in Minsk where she won the bronze medal, she consolidated her reputation with the “silver” in the European championship in Crema, Italy, and now she is in Kazan for the “gold”. In contrast to her Dominican colleagues, Laura speaks about her own ambitions very seriously.

“I aim at the golden medal in Kazan. If I manage to win a medal of other value, I will be disappointed of course, but it would be a bit wrong.” Laura Faurnier shares her expectations. “Generally, the French do not follow the Universiade thoroughly like the Russians, for instance. However, each French sportsman who has arrived in Kazan makes every effort to win a medal. I will do my utmost as well, and my further aim is the world SAMBO championship in St. Petersburg.” 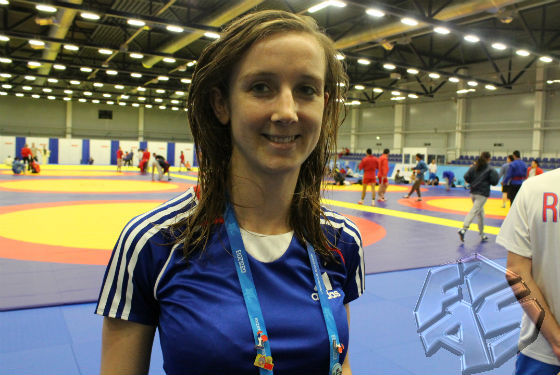 In contrast to the French female SAMBO athlete who is self-confident in the largest international tournaments, the sportsmen from New Zealand make themselves familiar with top-level competitions only. When the head of the New Zealand sport delegation Johann Boschof looks at his two SAMBO athletes training, he says that he hopes first and foremost for the successful draw.

“I would like our sportsmen to meet the representatives of the countries where SAMBO has been being developed for the same time as in our country. We have no chances objectively in contests with the Russians or Belorussians. Today the point we could manage to achieve depends on the draw”, says Johann Boschof. “But even if the sporting results will not be outstanding, I plan to form many contacts with representatives of various countries, in order to develop SAMBO in close cooperation with them.” 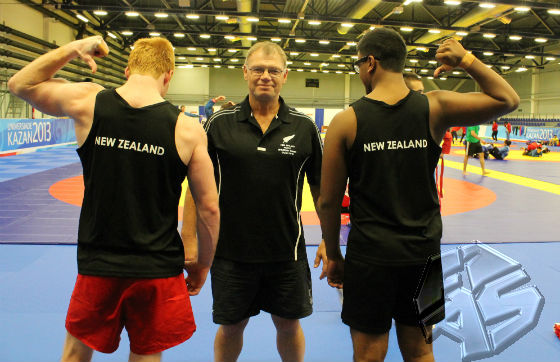 “I have seen the list of rivals in my weight category: there are many old acquaintances of mine who I wrestled against earlier. However, I have seen a large number of the surnames completely unknown to me: these are the sportsmen I do not know what to expect about. Naturally, if they are beginners, I need not only to wrestle against them well but to think about my own safety – there is a serious possibility to sustain an injury from such boys”, Kurzhev thinks.

In the course of the talk Uali presses the bottle with cold mineral water to his eye. Several minutes before he had sustained an injury in the mix-sparring with Ekaterina Badanova, which he and his partner didn’t expect. 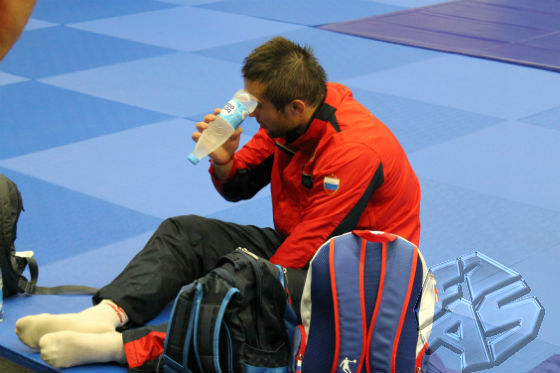 “Frankly speaking, Ekaterina and me have been in the same team for the first time, you might say that she is a beginner in the national team. We have decided to spar and this is the result,” says Uali. “But that’s nothing, we all have a positive mood. Yesterday we arrived at Kazan and even met the President of the Russian Federation Vladimir Putin. The matter is that we came to the cryosauna and met the head of our state there who came to this place as well. This is an excellent building enabling our sportsmen to relax and recover. Vladimir Putin appreciated and tested it personally. It is pleasant that he made it together with SAMBO athletes.”

Nobuyuki Asai, the representative of the Japanese sport delegation, member of the FIAS Executive Committee, recollects Vladimir Putin as well, during the training of sportsmen. 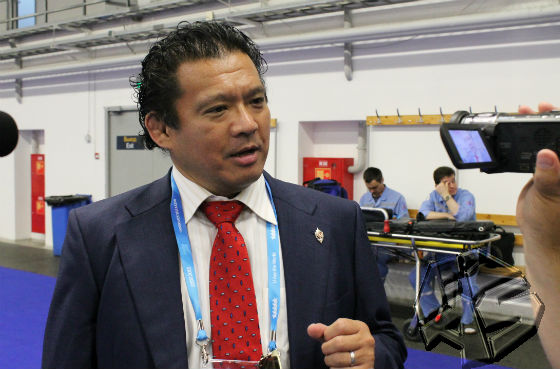 “A year ago, in the course of the meeting, the President Vladimir Putin and the legendary Japanese Judoist Yasuhiro Yamasita reached the agreement in the framework of which SAMBO would be developed actively in Japan. Then the SAMBO Cup of Vladimir Putin, the President of the Russian Federation, was conducted in our country, and now the Japanese delegation have come to the Universiade in Kazan. I should say that the organization manner arouses admiration. In Kazan we feel a bit better than at home. As regards the sporting component, further development of SAMBO in Japan depends on the results which will be shown by our sportsmen in the World Student Games. Therefore, I worry about the result, but the result will be, without fail!” says Nobuyuki Asai without a shadow of a doubt.

SAMBO athletes spend their time not only on training. Several of them transformed in actors for some time. They didn’t have to warm to their roles, as they represented themselves before cameras. The day before the SAMBO tournament start in the Universiade program the TV men filmed sportsmen for the caption that would be on the air during translation. 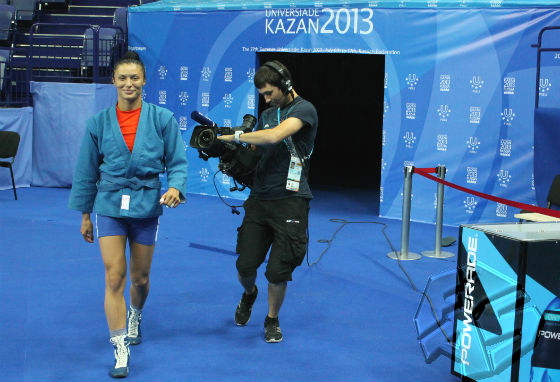 You will be able to evaluate the acting technique of SAMBO athletes, as well as to see them “in real work” on wrestle mats in Kazan tomorrow: on-line translation in the FIAS web site will start at 10 a.m. Kazan (and Moscow ) time.