Monument to the founder of SAMBO Viktor Spiridonov unveiled in Moscow 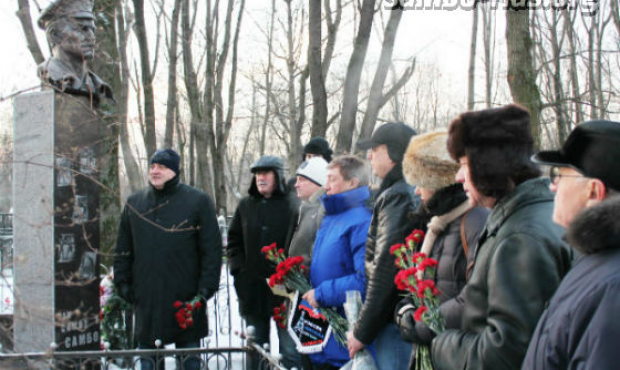 On December 20, on the day of the 130th anniversary after the date of birth of one of the founders of SAMBO Viktor Spiridonov, Moscow saw the monument unveiling at Vagankov Cemetry. So, SAMBO wrestlers have a chance now to pay tribute to that outstanding person’s memory, which they were previously deprived of…

The thing is that for a long time the Viktor Spiridonov’s grave was deemed to be lost and was found as late as in the beginning of 2012. The activists of the Nekropolists Association Non-Commercial Partnership made strenuous search efforts and achieved successful results. The grave was found, but it appeared to be neglected with the cross got aside and the epitaph hardly readable.

– Mikhail Lukashev, the SAMBO historian gave me a call and told about the finding. He told me the cemetery lot number and I went to search for it. But I didn’t make it: it was winter and I didn’t manage to find the Viktor Afanasievich’s grave alone, – David Rudman ,the FIAS Honorary President says.

According to him, they managed to see the grave in spring only, and it was in a dire state. There started up an idea to restore it and to eternize the memory of one of the SAMBO founders. The initiative group of SAMBO veterans addressed this proposal to the Moscow SAMBO Federation, which undertook the manufacture and installation of the monument to Spiridonov.

– Unveiling the monument to one of the founders of the Russian national wrestling is a deserved tribute to the memory of the extraordinary sportsman, person and citizen, – Sergey Baidakov, the Moscow SAMBO Federation President says. – Viktor Afanasievich Spiridonov is one of the founders of our favorite combat sport; moreover, it is him that the modern SAMBO wrestlers are indebted to for the name of the discipline itself – SAMBO.

The long search and name alternatives come reflected on the monument. A while ago, the system was called SAM, then SAMOZ, and finally it got the name of SAMBO that we have already got used to. Apart from the name of the combat sport itself, Viktor Spiridonov made major efforts on the SAMBO terminology formation. The terms introduced by him have been in use up to now including the phase training principle that lies in practicing the technique with a non-resistant opponent first.

– The year of 2012 can be called truly significant for the SAMBO community in the context of eternizing the memory of the SAMBO founders. In September there was a memorable bust of Vasiliy Oschepkov unveiled in Vladivostok; at present we witness the unveiling of the Viktor Spiridonov’s monument; moreover, there is a monument unveiled to Anatoly Kharlampiev at Novodevichy Cemetry. It is said that those who don’t remember the past, do not have the future. We can now surely say that SAMBO does have the future, – Sergey Eliseev, the President of European and All-Russian Federations said.

Sculptor Alexander Rukavichnikov in cooperation with architect Mikhail Korsi was toiling at the monument for half a year.

– The monument was created under the “from difficult to easy” principle. Initially the project included lots of picturesque elements, but in the making we decided not to use them. Viktor Spiridonov was a true unmercenary person – the one for whom money and fame didn’t mean much. That was another idea that we tried to capture in our work, – Alexander Rukavishnikov told. 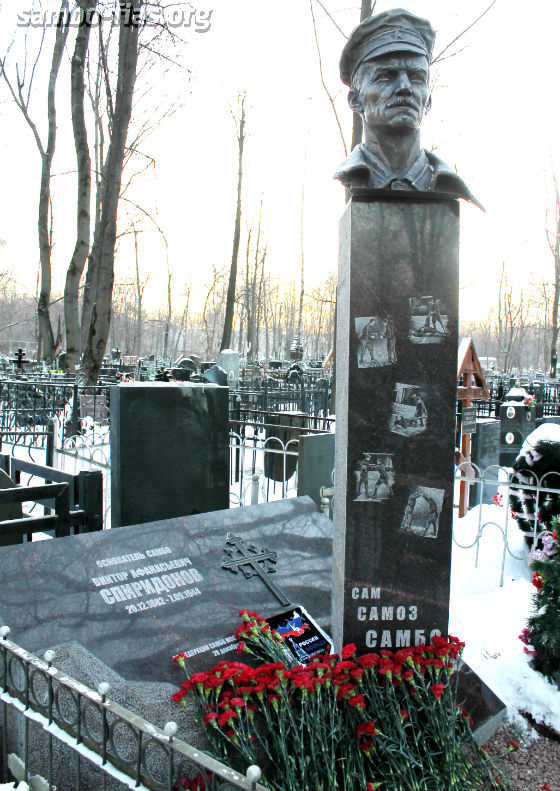 We can talk about Viktor Spiridonov much and for a long time emphasizing his contribution to the development of SAMBO. He was a military officer of the Russian Imperial Army, took part in the Russo-Japanese War and World War I, later worked in the People's Commissariat for Internal Affairs system. He studied jiu-jitsu since before the Revolution of 1917. Viktor Afanasievich was a member of the founding meeting of the Dinamo Association and was in charge of the Self-Protection Without Weapons sports discipline. He gave the name of SAMBO to that self-protection system, classified the SAMBO techniques and introduced the relevant terminology.