The FIAS President Vasily Shestakov: The Games in Ashgabat are held on the highest level 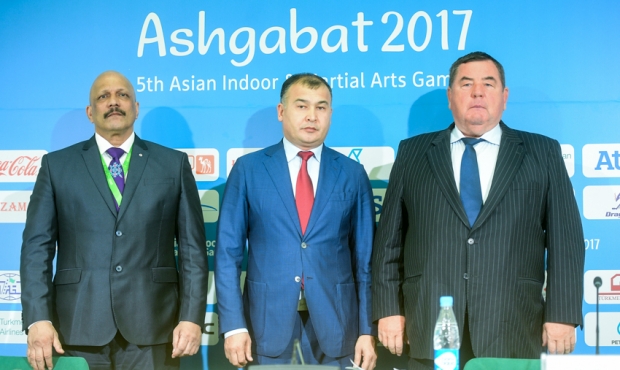 Vasily Shestakov opened the press-conference saying that sambo made the debut today at the programme of the Asian Indoor & Martial Art Games.

- Today we are part of the competition that is extremely popular among spectators. The bouts are very spectacular and stands are full of fans and we see that Turkmenistan loves sambo and we are very happy about it – said Shestakov.

- I would like to stress your attention on the great success sambo achieved. Just a few days ago sambo was officially included into the programme of the Asian Games 2018 in Jakarta (Indonesia) at the OCA General Assembly. I am sure it will give huge impulse for sambo development not only in Asia, but also worldwide as many National Sambo Federations will be able to obtain the state funding – concluded FIAS President.

Speaking about the sambo development, Vasily Shestakov said, that currently FIAS is negotiating with FISU and other international sports organizations. We can see the serious boost of sambo development at all the continents. Sambo became part of the programme of the Central-American Games, the last World Sambo Championship in Sofia (Bulgaria) was broadcasted live in 15 countries, which is a clear proof of sambo popularity all around the world – said Shestakov.

Alamjon Mullaev highly appreciated the level of the AIMAG organizing and pointed that the sports infrastructure is in line with the highest international standards. He thanked the Government of Turkmenistan and personally the President Gurbanguly Berdymukhammedov for giving the opportunity to the athletes and spectators to be part of this celebration. This Games will make the history as the best organization of sports competition that I ever witnessed – said Mullaev. He informed the journalists that 223 athletes from 17 countries are taking part in the competition, which consists of 7 weight categories in sport sambo for both men and women and 9 weight categories in combat sambo. Turkmen people love sambo and their athletes are one of the best – concluded Mullaev.

Questions from the journalists

Can we say that this competition is a rehearsal before the Asian Games? What does it mean for sambo to be part of this Games?

- Sambo event at the Asian Games will consist of 6 weight categories: three for men and three for women. Today we can say that sambo inclusion into the programme of the Asian Games made it Olympic sport in Asia. But this is just a first step. We hope to increase the number of weight categories in the future. If so, more athletes will be able to take part in the competition.

What do you think about the level of the organization of the Games in Ashgabat? And when can we expect the sambo recognition by the IOC?

- I was very impressed with the high level of the Games organization, beauty of the city, amazing hotels, beautiful venue and of course with the high number of spectators. I was very happy that the spectators were not just watching the fights but also cheered sincerely for the athletes and knew what was happening on the mat. Regarding the sambo recognition by the IOC, we should have been recognized already. We fulfilled all the requirements from the IOC and we are in the close cooperation with different international sports organizations. WADA considers us as one of the best International Federations fighting the doping. Moreover, the representatives of the IOC that attended the European Sambo Championship 2017 in Minsk (Belarus) highly evaluated the level of organization – said Shestakov.

Speaking about other achievements, FIAS President informed everyone about the success of the famous French sambist Laure Fournier who recently became the sambo Champion for Peace at the “Peace & Sport”, together with the legendary football star Didier Drogba. The only sambist that was part of this club before is worldwide known Fedor Emelianenko. This is another sign of the sambo popularity all around the world.

[Photogallery] Press-conference on the eve of the start SAMBO tournament at the Asian Indoor and Martial Arts Games (Ashgabad, Turkmenistan)
Share
Blog
Recent photos
Latest news
Recent videos
Latest news
Follow latest news You are subscribed!
Thank you! Your confirmation email has been sent to your email.
This website uses cookies to ensure you get the best experience on our website More info Got it!