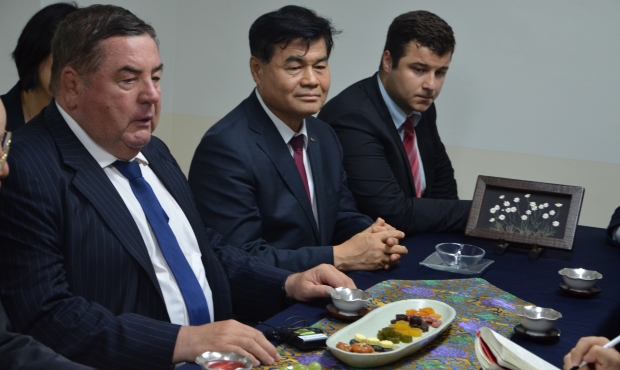 FIAS president Vasily Shestakov answered the journalists` questions prior to the international tournament, known as the «FIAS President's Cup», which is being held in Donghae (the Republic of Korea).

– Vasily Borisovich, can SAMBO potentially have a beneficial impact on the development of Russian-Korean relations?

– All kinds of cooperation, both in the domains of culture and sport, strengthen relations and SAMBO is no exception. It is obvious, that any sport unites people. Despite of the fact, that on the mat we`re rivals, beyond the mat we remain friends.

SAMBO is an acronym for «self-defense without weapons», it`s not an aggressive sport. SAMBO philosophy is protecting the weak, women and children. Nowadays SAMBO is being practiced in 120 countries. We`re also engaged in negotiations with a number of countries, including North Korea, we want them to join our federation.

– I think, he would beat everybody sitting at this table (laughs). Joking aside, Vladimir Putin holds a master of sports certificate, he`s also an honored coach of Russia. To tell the truth, Putin was a very promising sportsman.

His attitude towards sports is very reverential and sincere. Everybody remembers, what happened, when he arrived in the Republic of Korea on a state visit. When he saw the children, welcoming him (they were wearing sports uniform), he got out of the car and greeted each of them personally.

– It`s the second FIAS tournament, which takes place in Donghae. What does this city need to make this tournament even more spectacular? What can turn Donghae in a SAMBO center?

– SAMBO is already well-developed in Korea, this tournament demonstrates it pretty well. In this regard I would like to express my gratitude to Donghae major and president of CJ Corporation Sohn Kyung-Shik, the Consul General of the Russian Federation in the Republic of Korea Alexander Vostrikov and all in attendance for their assistance in the organization of this event. I also want to point out the titanic efforts of Korea SAMBO Federation president Chongkeum Moon, he puts his heart and soul in SAMBO development.

Speaking about the city of Donghae, I`d recommend the locals to hold open SAMBO classes and, of course, to create a web-site. These actions will have a positive effect for sure. I think, that despite of the fierce competition with other martial arts, SAMBO has good chances to become popular in Korea.

Not long ago SAMBO was included in the program of the 2018 Asian Games, which will be held in Indonesia. It will give an additional boost to SAMBO development on the Asian continent and in the Republic of Korea in particular.

– What`s the main difference between SAMBO and other martial arts? Which martial art you would consider more effective: taekwondo or SAMBO?

– I think everybody watched the recent fight between McGregor and Mayweather. The boxer won the fight, which was held in accordance with the rules of boxing, however in MMA fights SAMBO athletes usually emerge victorious. Just think about Fedor Emelianenko, Khabib Nurmagomedov, Oleg Taktarov. Representatives of all kinds of martial arts participate in such fights, but they`re usually won by combat SAMBO athletes. So it`s quite easy to answer your question: pick the strongest taekwondo athlete, we`ll pick the strongest SAMBO athlete, let`s organize the fight and see, who achieves victory (laughs).