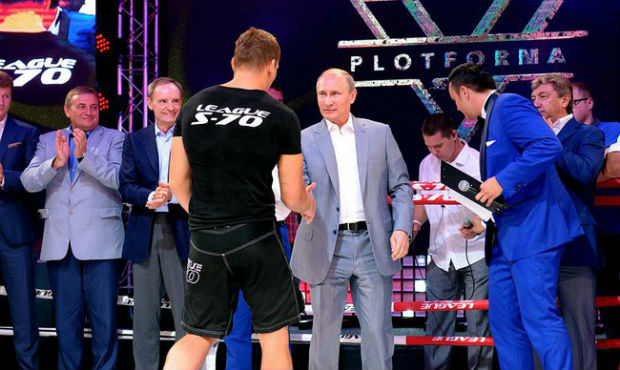 In Sochi the 5th International Tournament in Combat SAMBO PLOTFORMA S-70 was held. The Russian team won a convincing victory over the World team with a score of 9:1. The winners of the duel meets were awarded the champion belts. The Russian President Vladimir Putin awarded the contest triumphant Vyacheslav Vasilevsky, who knocked the Brazilian Maiquel Falcao in the 1st round, and Prime Minister Dmitry Medvedev awarded Alexander Sarnavsky, who defeated the American SAMBO athlete.

“My words are addressed to the athletes, gratitude and admiration for your art and your courage. We in Russia, of course, always cheer for ours. There are opponents, but there are never enemies on the mat, on the judo mat, in the ring. And this is what we learn from sports”, – said Putin.

The Russian President thanked all the guests who came to the Tournament in Sochi, heads of Azerbaijan and Armenia were among them. On Saturday afternoon Putin held bilateral talks with them, and on Sunday, August 10, a meeting in a trilateral format is scheduled.

“SAMBO as a sport was born in the Soviet Union, it is developed in Armenia and Azerbaijan”, – recalled the Russian President, and thanked the President Ilham Aliev for the fact that he was SAMBO lobby at the first European Games, which will take place in summer of 2015, specifically. The fighters supported Putin’s words with applause.

“Today the Sportsman’s Day is. Our souvenir is from all the sports fraternity”, – with these words Renat Laishev, General Director of the Sports and Education Centre Sambo-70, presented a belt to the Russian President.