For the first time in history: Honduras SAMBO Championships 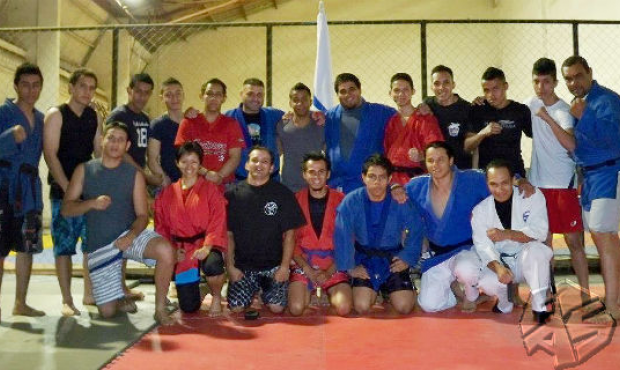 Honduras is a country in Central America, bordering with Nicagarua, Salvador and Guatemala. Since 1880, the capital of this country is the city of Tegucigalpa. It was particularly the place, where the National SAMBO Championship was staged for the first time ever.

These rules are not one of the simplest, judge for yourself: first off, the Federation must go through a foundation meeting of the clubs practicing Sambo, then comes the registration of the Federations with the Ministry of Justice, next is the registration with the Ministry of Sport occurs; and eventually – a final approval by the Parliament of the country.

Such a sophisticated way for a new type of sport to appear in a country, demonstrates the seriousness and commitment of the State to the development of sport nationwide. As we all know, if there is a commitment - there is a success. That is why we can positively predict a big future for Sambo in this country.

The first National SAMBO championships was staged with help from the neighbouring Salvador Sambo Federation. It was the Salvador Federation that sent their coaching taskforce, to include Mr. Guenadi Galvez (graduate of the Cuban Institute of Physical Education), Mr. Manual Rivera and Mr. Rene Monge. If we remember back to January, it was the Salvador, where the first coaching Sambo seminar for Carribeans took place, which involved the participation of representatives of Guatemala, Honduras and Nicaragua.

Ms. Marina Sifontes, member of the Executive Committee of the Sambo Federation of Honduras, commented the following about the helps of the neighbours: «The coaches of Salvador have given us an invaluable assistance and help, and most importantly, they gave it to us when we most needed it. The human resource – the most important part in an organization of projects like this. The actual competition turned out to be rather easy and interesting, numerous amounts of spectators got acquainted with Sambo and have seen for themselves just how exhilarating and welcoming this type of martial arts can be».

The championship preceded seminars for coaches and referees, where in great detail, the methods of training for Sambo and the nuances of the Sambo competition rules were looked at.

On the day of the competition, Mr. Elvin Cruz stated, that this National Championship will be the selection event for the Honduras Sambo team, for their participation in the International Universiade in Kazan, and the Pan-American Championship in 2013. To prove Mr. Cruz's words, it was the students of the national Honduras University, who stepped onto the Sambo mat. The competition was held in 11 weight caterogies, and interestingly, the number of contestants matched the number of years, for which Sambo has been around, which is 75.

In addition to the winners and champion of this event, the following athletes were also awarded: Jorge Garcia, 68kg «for best SAMBO technique», and Jose Guardiolo Zelaya (57kg) for the «best SAMBO spirit». The following names were announced first time in history of the National Honduras Championship as the medallist of National event: