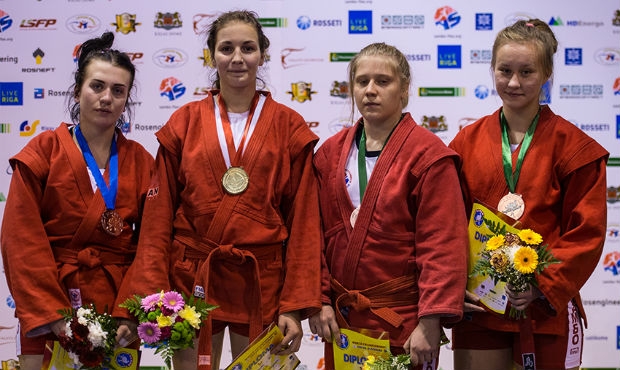 Anfisa Kopaeva brought the first gold medal to the Belarus Sambo team with her win in the weight category up to 48 kg among juniors. She wasn't even planning to compete in Latvia: 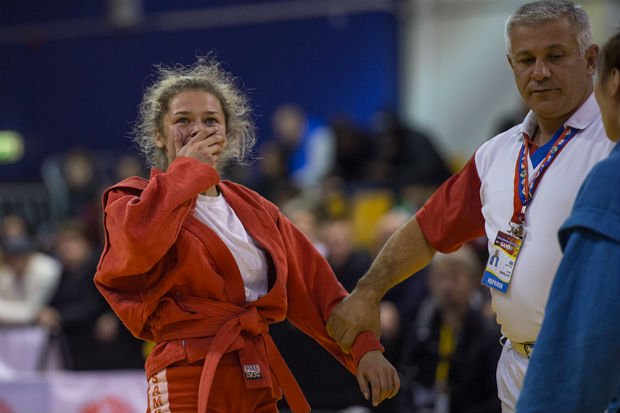 "My coach and I weren't planning to go to Riga, but a week before the start, we decided to do it. To be honest, I wasn't very well prepared functionally, so I never even imagined I could win a gold medal. My coach said: "Let's give it a try and see what happens." I carefully psyched myself up for each match. I wanted to win, and I did. In the final, my opponent from Mongolia was physically much stronger than me, so it wasn't easy. In the end, this was my second win in a youth world championship, and I won three more in European competitions. "

Russian Gulfia Mukhtarova didn't give French athlete Marion Sarroca a chance in the final, and won a gold medal in the weight category up to 60 kg among juniors: 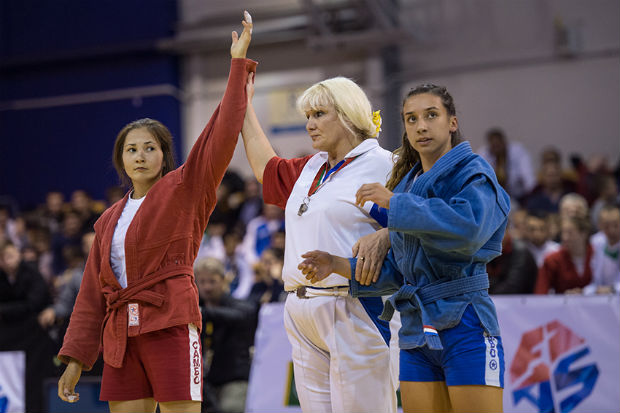 "I want to thank all the coaches who worked with me. I'm really happy to be a world champion. It took me a long time to get here, and it finally happened. I'd also like to thank our coach Nina Novgorodtseva for her kind words about me in an interview for the FIAS website before the start of the tournament in Riga. We have a very friendly and close-knit team – like a family. We all support each other: we share the joy of winning and the bitterness of defeat together. The fight today was unpredictable – in the final, I was up against a French opponent I'd never met. The coach and I studied her technique: she attacked with her left hand, so we did everything to turn this hand aside, and take our actions. This isn't my last competition this year: the European Sambo Championship among women starts in two weeks. I'd like to perform well there as a member of the Russian "adult" team.

Despite her defeat in the final, French athlete Marion Sarroca glowed with joy and examined her silver medal: 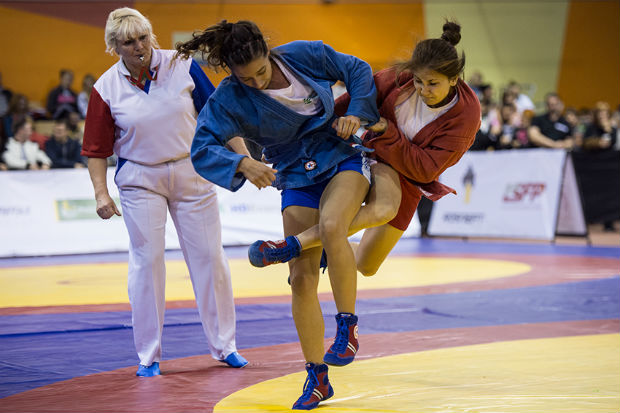 "I'm happy. Of course, a gold would have been better, but I'm also happy with a silver. I did everything I could to achieve the best results in this tournament. What are the three reasons why I love Sambo? First, I love martial arts; second, Sambo has an incredibly wide range of holds; and third, I REALLY love martial arts."

Russian Timur Boev fought skillfully in his final fight. After defeating Georgian Jambuli Kurdiani, Timur won a gold medal in the weight category up to 65 kg among youths. 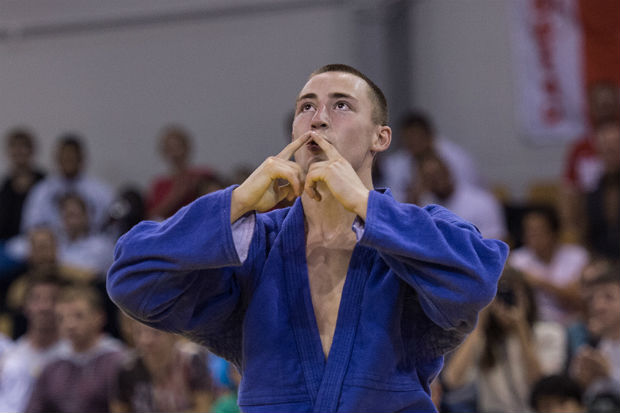 "I became a world champion at the tournament in Korea last year, and this year I managed to get a gold in Latvia. I know my opponent in the final fairly well. I was ready for our match and knew how to fight properly. Some people say I have a symbolic surname for martial arts. That's probably right. But I'm still not keen on Combat Sambo: I have to get results in Sport Sambo, and then maybe think about something else."

Ukrainian Sergey Krivchakh brought the first gold medal to his team's collection. He was the winner in the weight category up to 81 kg among youths: 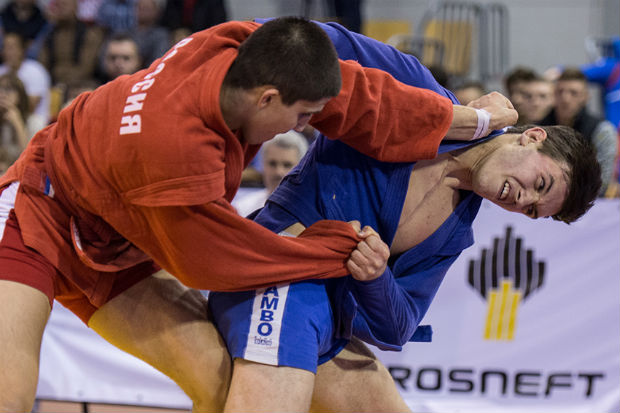 "I want to say hello to everyone in Ukraine – to friends and family who supported me. The final match was tough, with a really difficult Russian opponent. But I managed to cope, so everything went well. I talked with my father before the fight (he coached me), and he gave me instructions on how to fight properly. Thanks to him, everything worked out. My gold was the first for the Ukrainian team, but I hope it's not the last. The team was hoping for gold medals on the first day of the tournament, but it didn't happen. I'm glad we were able to make up for it today."

Belarusian Sambo wrestler Diana Zhukavets was exuberant after winning. She was the winner in the weight category up to 70 kg among girls. Right after the fight, her father Vadim Zhukavets, who is also her coach, congratulated her, followed a moment later by her mother Nona Zhukavets, who was one of the judges at the World Youth Championship: 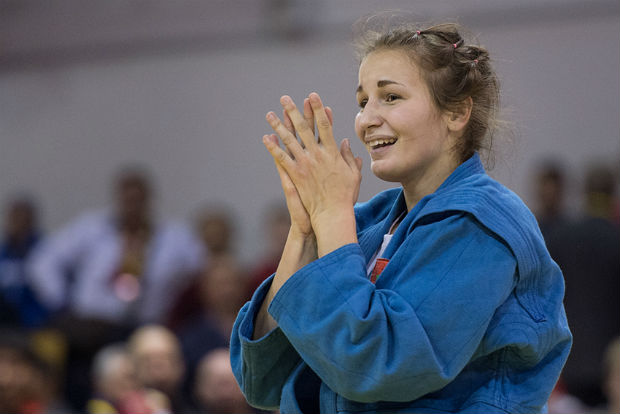 "The first emotions have subsided, but I still don't believe it happened. It was my first time at the World Championship, and I won a gold medal. I've always dreamed of singing my country's national anthem while standing on the podium with the whole world watching. Today, I made this dream come true, and I'm very happy. I came with my mom, dad and younger sister. My mom is working as a judge here, my dad is a personal trainer, and my sister Mariana is taking her first steps, and taking part in the children's competitions among children. I also have an older sister, Kristina. This is my pride and an example for me. She won a gold at the World Youth Sambo Championship in Greece. I'm trying to work and train to be like her. Having my parents in the tournament is very helpful, but at the same time, it's really difficult, because you're afraid to let them down. They're devoted to you, they live with you, train... It's a big responsibility, but I also get a lot of support from them."

Russian Daria Tipchuk confidently fought a decisive battle. She ended her match early and won a gold in the heavyweight category over 75 kg for girls. 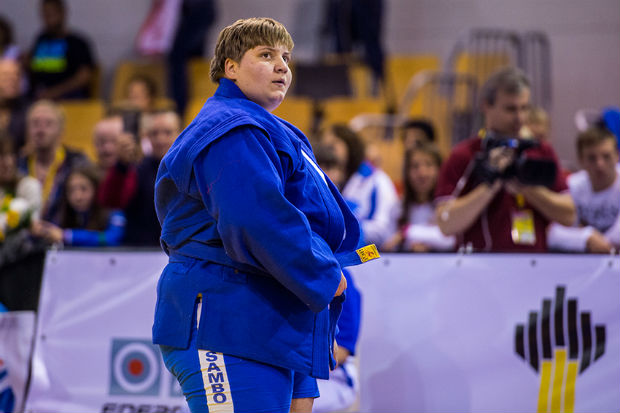 "After the competitions, I said to myself: 'Well done! You did great, now you can relax.' The team calls me the life of the party and the main joker. I think you should always go for the positive in life. If someone on the team is sad, I always try to cheer her up. But most of the jokes are about the coaches. Of course, we don't joke at major tournaments like the World Championship. But during daily training or at training camps, the other girls and I really love making fun of the coaches. There's no sport without it."

Emotions probably ran highest in the final fight in the weight category over 87 kg between Russian Ivan Tachkov and a representative of the host country of the World Youth Championship, Aleksejs Akimenko. The Russian managed to win the gold in a close fight: 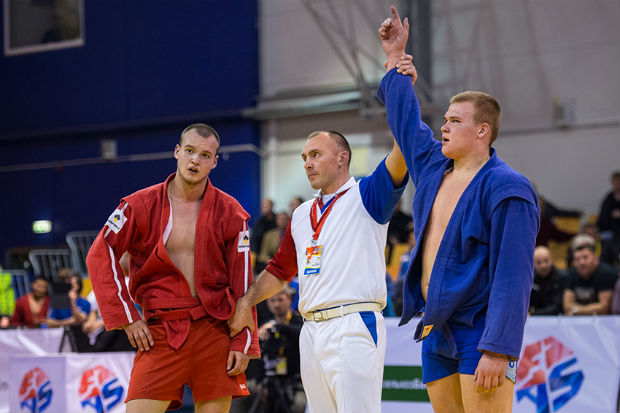 "I won mainly because I wanted to. I had a serious opponent, especially since he was fighting at home and was trying to do everything possible and impossible to win. Did the local audience actively support their compatriot during the fight? I always tune out during a match and don't notice anything. I only hear the coach. I know his voice and hear it, even if a roaring jet plane goes by."

Latvian athlete Aleksejs Akimenko standing on the second step of the podium looked like the saddest man on the planet: 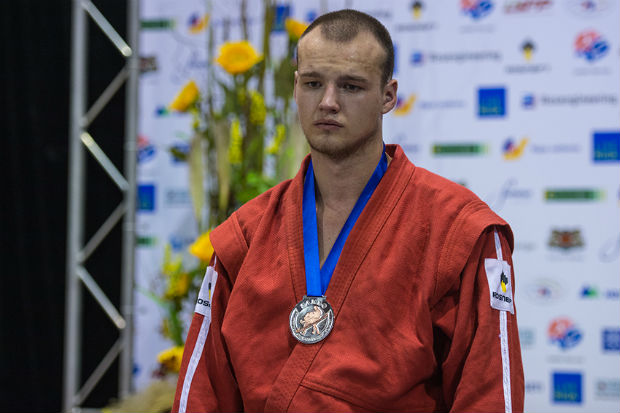 "Of course, I am upset. I really wanted to win the championship at home, and I trained for a long time. For six months, all my workouts were aimed at preparing for this tournament. Competing at home is a really special feeling. Home walls really help. My father, friends and coach were in the stands cheering for me. Too bad I was just short of a gold.

A brilliant fight in the final allowed Ukrainian Sergey Zverev to win a gold medal in the weight category over 100 kg among juniors: 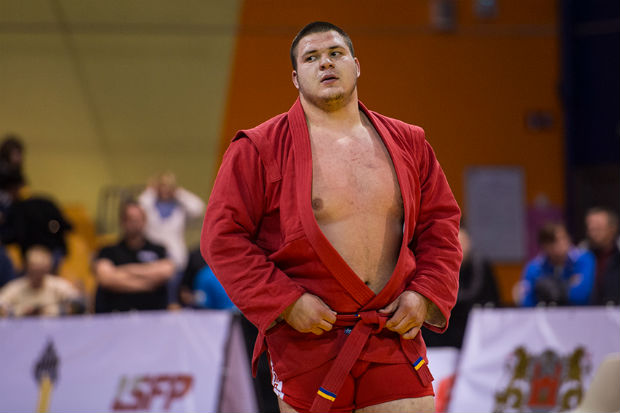 "I want to thank my coaches and family – everyone who helped me prepare for this start. My opponent was really tough and experienced. I'd already fought with him in the final of the European Championship. I also won then, but I think it's all God's will: as God wills, so it will be. Now the most important thing is to write to my mother and grandmother. They're cheering for me and are very emotional about this. I have to make them happy!"

[Photogallery] World Sambo Championship among Youth and Juniors. Day 2 — finals
Share
Blog
Recent photos
Latest news
Recent videos
Latest news
Follow latest news You are subscribed!
Thank you! Your confirmation email has been sent to your email.
This website uses cookies to ensure you get the best experience on our website More info Got it!