The XX Maccabiah Games were held in Israel 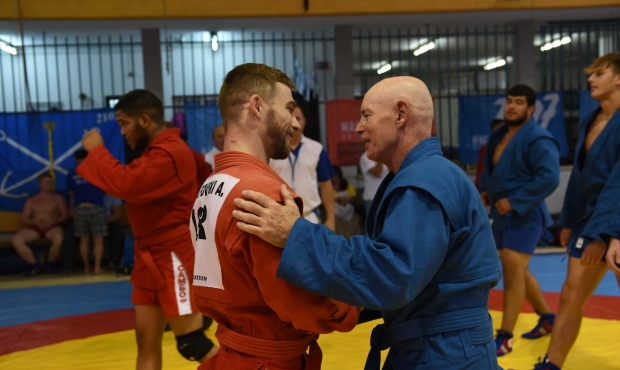 The XX Maccabiah Games were held in Israel from July 4 to July 17 2017, gathering more than 10 000 athletes from 80 countries. The USA presented the most numerous national team, consisting of 1 300 sportsmen, right after the hosts of the tournament. Competitions took place in all major cities and stadiums of the country.

Before the tournament FIAS officials and athletes from Maccabi representative team laid wreathes at the «Wings» memorial in Netanya, which is dedicated to fallen heroes.

Sambo World Tournament for the prizes of Iosif Roitman (founder of SAMBO in Israel, Honored coach of Ukraine) was organized and held on the initiative of FIAS, FIAS president Vasily Shestakov, advisor to FIAS president Yuri Trufanov and with support from the Israel SAMBO Federation and Russian Maccabi chairman Vadim Polianskiy. Iosif Roitman is a symbolic figure for Israeli sambists, as in 1972 he founded the first youth SAMBO school in the country in commemoration of the Munich massacre victims. The Israeli national team, the Russian national team and the World team (the rest of the world) competed for prizes.

Israeli government official and two-time judo European vice-champion Konstantin Razvozov gave a speech at the solemn opening ceremony. He noted, that these competitions were particularly important for the young athletes, who gained priceless experience of interacting with prominent sambists from various countries and continents, Mr. Razvozov also promised to support the inclusion of SAMBO in the 2021 World Maccabiah Games.

The Israel national team won the tournament, while the Russian national team and the World team took the 2nd and the 3rd place respectively. All participants enjoyed the fights and got vivid impressions, they also received athletic apparel and souvenir gifts from FIAS. Iosif Roitman, the founder of SAMBO in Israel and the main hero of the tournament receive memorable gifts from FIAS and the organizers of this sporting event.