XXVI Congress of International Federation of Sambo in Narita [VIDEO] 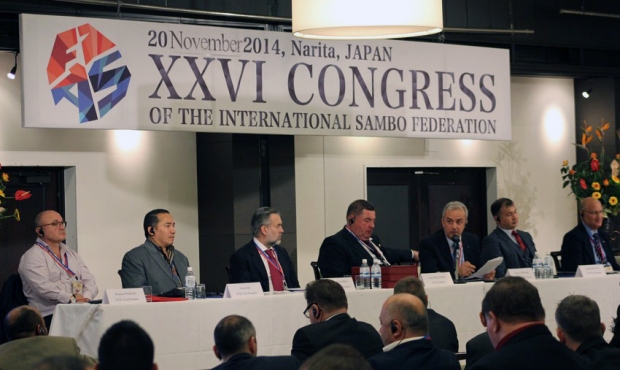 Today, in advance of the tomorrow’s start of the 2014 World Sambo Championship, Narita View Hotel hosted the Congress of the International Federation of Sambo. It was attended by 150 delegates representing 72 National Sambo Federations from 5 world’s continents. This report from Japanese Narita will tell you about the decisions and discussions that took place at this annual meeting of the leaders of National Sambo Federations.

The Congress meeting began with the report of the FIAS President Vasily Shestakov on the recent work done by the International Federation of Sambo. Inclusion of sambo into the program of multi-sport games, such as the Universiade in Kazan, II SportAccord Combat Games in St. Petersburg, and IV Asian Beach Games in Phuket, successful running of world sambo championships among athletes of different age groups, continental championships suggests the direction of the modern world sambo was truly selected. The FIAS President also noted new features of the FIAS sports calendar, i.e. the successful President's Sambo Cup in the UK and Russian President’s Cup in Japan held in 2014.

Vasily Shestakov informed the Congress delegates that in 2015 sambo will be included in the first-ever European Games in Baku. To date, the selection rules and qualifying requirements for the participation of sambo athletes in this tournament which will start in the capital of Azerbaijan next July have been formulated.

The FIAS President reported on the numerous referee and coaching seminars held last year under the guidance of the FIAS. Seminars and further qualification of sambo referees allowed making a quality leap in the efficient arrangement of the referee work at sambo tournaments included in the FIAS calendar.

Swiss lawyer Mr. Vellover reported on referee proceedings currently held by the FIAS against a group of people who were excluded from the FIAS management for subversive and destructive activity.

First Vice President of the FIAS Andrey Klyamko presented the 2014 financial report to the Congress delegates. He reported on the expenses for the maintenance of FIAS offices, salaries of specialists, marketing solutions (gifts, awards, presentations), assistance to NSF in purchasing mats, tickets, equipment, financing of organization and holding of sambo tournaments, expenses stipulated by the agreements with international sports organizations.

Chairman of the FIAS Legal Commission Suresh Gopi reported on the new FIAS Charter that was planned to be approved at this FIAS Congress. The main changes made to the updated Charter were intended to make it more advanced and modern in terms of the requirements of the International Olympic Committee. All the delegates reviewed the updated FIAS Charter in advance, so today the Japanese Congress has approved it by majority vote. The Congress delegates also confirmed by majority vote the decisions made at XXV Congress in St. Petersburg.

It was unanimously decided to hold the next XXVII Congress next November in Morocco, in advance of the 2015 World Championship.

General Director of FIAS Office in Lausanne Michael Büchel reported on the Ebola virus combating project. This project had been already supported by several international sports federations, and the idea of the assistance of this project currently came up to the International Sambo Federation as well. “We've all heard about what is happening now in the world because of this virus. Therefore, I am convinced that we should and even must support this project. I suggest delegating this decision to the FIAS Executive Committee,” Vasily Shestakov commented this issue on the agenda of the Congress.

The Director of the President's Cup in London told the attendees about the event held in late September in the capital of the UK. Leo Malim remarked that 90% of the British people hadn’t known about this tournament before. The task of the Organizing Committee was not only the successful holding of these sambo competitions, but also to increase the interest of the British people in going in for sambo. This task was achieved, and the tournament which format was selected successfully justified itself.

At the end of the Congress Vasily Shestakov thanked President of the Japan Sambo Federation Masaaki Kondo for the successful holding of this Congress and the contribution of the federation to the arrangement of the 2014 World Sambo Championship.

This happy note completed the XXVI FIAS Congress in Narita which became history. As early as tomorrow sambo athletes will manage their own history, the history of victories and overcomings. We remind you that the online broadcasting of the main sambo tournament of the year will start on the website of the International Federation of Sambo at 10:00 local time. Finals will be broadcasted at 18:00.

[Photogallery] XXVI CONGRESS OF INTERNATIONAL FEDERATION OF SAMBO IN NARITA
Share
Blog
Recent photos
Latest news
Recent videos
Latest news
Follow latest news You are subscribed!
Thank you! Your confirmation email has been sent to your email.
This website uses cookies to ensure you get the best experience on our website More info Got it!