“I just carry out a coach’s plan and I win” 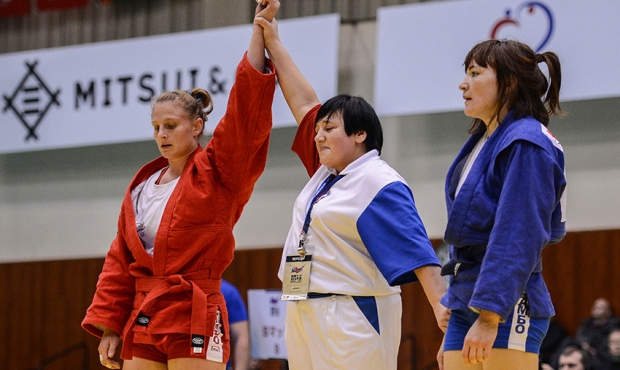 The second day of the Sambo World Championship was full of events. The Japanese athletes won their second golden medal; the Bulgarian athletes had no luck, and the first golden medals of Ukraine and Israel. Whose final was the most swift-passing? Who could win for the last seconds? Whom supported the world sambo ambassador Fedor Emelianenko?

Do you know what happens in the World Championship in Japan when the Japanese athlete wins the tournament among women? In one second everyone begins to rejoice: The athlete, her coaches, supporters, and all the technical staff of the tournament. All these people start to jump, rejoice, and bow to each other. Overfilled of his emotions, the coach runs toward to the athlete and it seems that he wants to hug her. However, he simply stays in front of her and eagerly begins to bow, and the athlete with the same feelings begins to bow in return and the same picture for others.

The attendees in the World Championship arena watched exactly this performance after the victory of Shori Hamada (weight category up to 80 kg). In her finals she beat the Bulgarian sambo wrestler Maria Oryashkova. The final fight itself was such exciting that views couldn’t take these eyes off from the performance. Oryashkova led in score, she had 1:0, and then she was very close to win, but insistence and activeness allowed to put out a victory with 2:1 to the Japanese athlete.

“I began to practice sambo more than 2 years ago. Earlier my sport career was related with the judo only. I’m very happy because I could win the World Championship in this kind of sport. In addition it is more pleasant for me that I could do this in Japan, in front of my own viewers,” Shori Hamada shared her impressions.

The fight in combat sambo (weight category of up to 62 kg) between Veselin Ivanov (Bulgaria) and Igor Severin (Ukraine) was last-ditch as well. The famous competitors were equal and for a long time they couldn’t gain the score. But then the Bulgarian sambo wrestler began to lead with 1:0. The fight came to an end when the athlete from Ukraine carried out a disputable throw. To be objective, the referees went to watch a video. The wrestlers nervously walked about in their corners. And finally the result: 2 points for the Ukrainian athlete. Veselin Ivanov tried to win the fight but Igor Severin gave him no opportunity to do it.

It is worth notice that the Bulgarian wrestlers had no luck in the finals of this World Championship. For 2 days they had 6 finals but no victory. Nevertheless, the Bulgarian national team lacks golden medals in struggle for the first place among teams. After the first competition day, the athletes from Bulgaria were late only for several points from the current leader – the Russian national team.

“After the first tournament day, in score we were almost equal with the Bulgarian team which had 3 silver medals,” said Alexander Konakov, Chief Coach of Combat Sambo of the Russian national team. “And after the victories of Dmitry Samoylov and Kirill Sidelnikov, we could have a little gap from our competitors. I’m very jubilant for our team. The honorable and mature Ukrainian athlete Igor Severin also helped us because he beat Veselin Ivanov from Bulgaria in finals.”

As for the Russian athletes who had a victory in combat sambo, three of them represent the sport school of Belgorod – the sport school where the sambo legend Fedor Emelianenko earlier had practices and now he help very actively to this school. It was worth watch how he was worrying about his homies and friends! It felt like Fedor was ready to step himself to the mat and to show what he was able to do.

“Today 2 athletes from Belgorod Region became the champions, and yesterday another one as well”, Emelianenko told to the journalists in his interview. “Of course, I was very nervous when watched guy’s fights because we grew up together and we go along together in our lives. I think all the guys got good results.”

If Dmitry Samoylov (weight category of up to 82 kg) had some difficulties on his way, especially in his first fight, but Kirill Sidelnikov (weight category of +100 kg) passed his way smoothly and confidently. As a result, he became the four times world champion. From outside, it seemed liked rival bewared of the Russian bogatyr.

“Do competitors fear of me? Yes, they do. I see it and try to use it. It brings victory to me,” explained Kirill Sidelnikov. “The golden medal from Japan is the fourth for me. All the victories are equally appreciated. However, last year it was more pleasant for me to win the tournament as it took place in Saints Petersburg. For me Fedor Emelianenko is a coach, close friend and companion. That is why I feel responsibility when he attends the competition, and the victory is more appreciated accordingly.”

The Israel athlete Alice Schlesinger (64 kg) was the champion in Saints Petersburg as well. That golden medal was the first in her sambo career. But the confidence of Alice’s victory told us that she wasn’t satisfied with what she’d achieved. She came to Japan as an absolute favorite and she got the finals confidently. Her rival in the finals was the Russian athlete Olga Medvedeva who had her own opinion who would be the champion. The fight was very stressful and persistent, and the title of the two times world championship for Alice Schlesinger as a result.

“Before every fight my husband and at the same time my coach Pavel Musin prepares a plan for me, that is why I just carry out a coach’s plan and I win. Actually during the fight we make some improvements but it happens very rare”, commented the athlete. “It is hard to say which victory was the most difficult. If one year ago my rivals knew about me and they tried to adjust to my fighting style, this year I have a feeling that my style was analyzed by details. Of course, it wasn’t easy to win but I did what I had to and proved my champion’s title.”

Compare to Alice Schlesinger, the Russian wrestler Dmitry Eliseev didn’t have the champion’s title before this World Championship. And exactly the victory in Narita was his dream.

“Naturally I’m very glad that this year I obtained the World Cup, but the impressions of the Sambo World Championship victory I can’t compare with anything at all,” explained Eliseev. “My dream came true, I won the World Championship. May be because of the moral approach, all the fights were very difficult. The World Championship is very outstanding event, you are very nervous and really like overburn, like another athletes say.”

Likely other members of the Russian national team overburned exactly in their finals. The finals in sport sambo between the Russian athlete Iliya Lebedev and Amil Gasimov from Azerbaijan (weight category of up to 74 kg) was very demonstrative. It was alternating fight: small advantage passed from one athlete to another. And when several second remained to the end Azerbaijanian wrestler lacked points. But the unexpected attack let Amil Gasimov to put out a victory and became champion proving once again the necessity in sambo to fight up to the last seconds.

Today in Narita will take place the last competition day. Watch the online broadcast and follow the results of the Sambo World Championship on the FIAS website.