Meeting of the FIAS Executive Committee in Minsk 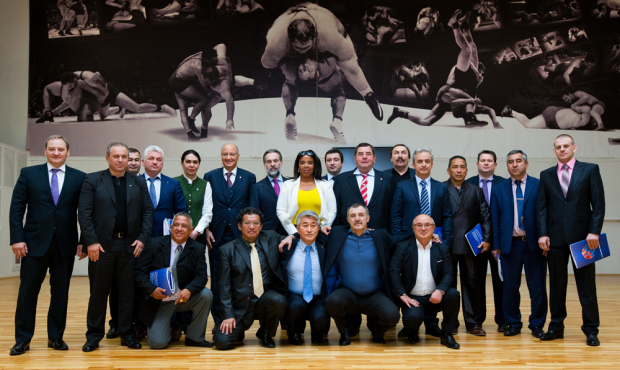 Meeting of the FIAS Executive Committee in Minsk: a new format for holding Executive Committee meetings and presenting the Aleksandr Medved Medal, the Year of Asia and the coach training programme, a debate on changes to the Sambo competition rules and the establishment of new FIAS committees.

Minsk. 19 February. The day before the start of the Sambo World Championship stage “International Tournament for the Prize of the President of the Republic of Belarus.” The meeting of the FIAS Executive Committee is scheduled for 3:00 p.m. at the Aleksandr Medved Wrestling Palace. The Sambo Federation of Belarus has easily and confidently switched up the usual routine for holding such an event, to give the members of the FIAS Executive Committee an opportunity to get a firsthand view of the unique palace, which was named in honor of the three-time Olympic champion in freestyle wrestling, Aleksandr Medved. The palace was opened in September 2012 to commemorate the legendary wrestler’s 75th birthday.

Prior to the meeting, the Executive Committee members visited the Wrestling Hall of Fame, where, in addition to numerous exhibits, they had the opportunity to view the original awards of the three most famous Belarusian wrestlers and Olympic champions of different years: Oleg Karavayev, Kamandar Madzhidov and Aleksandr Medved. This museum also houses two unusual sculptures: the first one represents two wrestlers frozen in the heat of battle, while the second shows a bear (an allusion to the last name of Aleksandr Medved) with three Olympic medals standing at the top of a victory podium.

Following this interesting tour of the history of Belarusian wrestling today, the FIAS leaders then got down to business.

FIAS President Vasily Shestakov opened the meeting with a brief report on recent work performed: “Following the successful inclusion of Sambo in the programme of the Kazan Universiade and the second World Combat Games in St. Petersburg, this year, which has just begun, we have already had some serious achievements – Sambo has been recognised by the Asian Olympic Council and included in the programme of the Asian Beach Games. We are in negotiations for the similar promotion of Sambo on the Pan-American and African continents and doing everything we can to have Sambo included in the programme of the 2015 European Olympic Games in Baku (Azerbaijan).”

The next speakers were the leaders of the National Sambo Federations of South Korea and Japan, the organisers of the main Sambo starts this year. Korean Sambo Federation President Moon Chong-Keum: “Young Sambo fighters will be received in Seoul in October at an 8,000-spectator dojo. This will be officially approved in early March. This is the gym where the 1988 Olympic Games were held, and I think this is symbolic for us Sambo fighters, who are striving for the Olympics. Negotiations are under way with South Korea’s central television channel, and we will try to do everything we can to make sure this youth tournament is held at the highest level.”

Japanese Sambo Federation vice-president Nobuyuki Asai continued the “organisational and preparatory” theme. “We have already decided on the arena and are currently pondering all the logistics and infrastructure for the future tournament so as to make it as comfortable as possible for all participants. Narita is a city with an international airport, so it’s ideal for athletes. They won’t have to spend much time on traveling around. This is important – they will put more effort into demonstrating a glorious and lively fight.” (smiling)

Executive Committee member Caesar Orteaga reported on preparations for the Albert Astakhov Memorial World Championship. “Last week our government confirmed that it will take on the financial expenses for the accommodation and meals for all tournament participants. This is a huge help for us in holding this major FIAS event.” The Pan-American stage of the World Championship will be held in Caracas in early July.

The Executive Committee then adopted a resolution to add three new tournaments to the FIAS competition calendar: the Pobeda international youth tournament to be held in St. Petersburg in early May, the British Open planned in Bedford in early April, as well as the World Championship to be held in Burgas (Bulgaria) in September.

The Executive Committee also decided to establish two new commissions that will receive final approval at the next FIAS Congress: a legal commission and a commission for women’s affairs. It was suggested that the latter of this short list be headed by Seychelles Sambo Federation President and Executive Committee member Monique Athanase. “This is a great honor and challenge for me. I am a woman and I am very happy that we will be able to focus attention on women’s Sambo issues in our work on this commission and thus enhance the role of the ‘fairer’ sex in our combat,” said Ms Athanase.

There was much debate about the draft new rules for holding Sambo competitions. The most notable of the main adjustments to the existing rules are: a reduction in the amount of time an athlete can spend with a doctor to one minute, a reduction in the number of points that indicate a clear victory (it is proposed reducing this figure to 8 points), equalising the amount of combat time for both men and women (it is proposed making it the same at 5 minutes) as well as a few other nuances. The Executive Committee decided to give final consideration to all the changes to the existing rules at the next referee seminar to be held in the run-up to the World Championship Stage – Anatoly Kharlampiyev Memorial in Moscow, where all the concerned parties can express their opinions. The time to discuss the new referee rules will come in late March when the second World Sambo Championship Stage of this year is held. The “referee issue” will be given official validity at the next meeting of the International Sambo Federation Executive Committee.

The Executive Committee also approved the coach training programme, which consists of a two-week advanced training course for Sambo coaches. Anybody can take the course at Russian State University of Physical Education and Sport (Moscow). FIAS plans in the nearest future to launch the unique programme, which consists of 72 hours of practice and theory and helps coaches improve their professional training and teaching skills.

This wrapped up the Minsk meeting of the FIAS Executive Committee, held in the run-up to the Sambo World Championship stage “International Tournament for the Prize of the President of the Republic of Belarus.” The championship starts tomorrow at 9:00 a.m. Minsk time (1 hour behind Moscow time), and spectators can view the opening ceremony and final matches at 5:00 p.m. You can see a broadcast of these battles on the official International Sambo Federation website at www.sambo.sport. This marks the first time that the FIAS website will broadcast simultaneously from three wrestling mats, while the evening fights will be available with commentary in two languages: English and Russian.