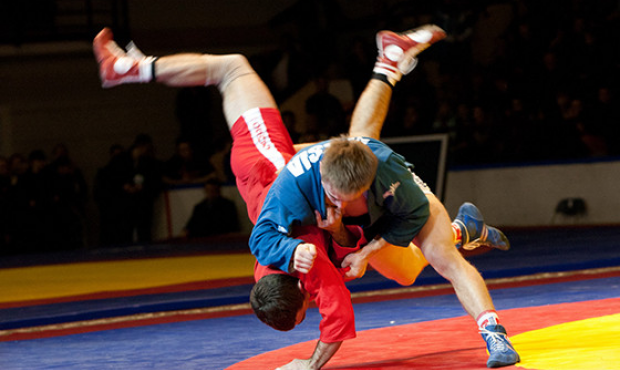 The tenth anniversary International Sambo Tournament for the prizes of Honoured Master of Sports of Russia Ashot Markaryan was held on December 7 in Armavir, Russia. More than 100 strongest sambo athletes representing 16 teams from five countries gathered to compete for the title of the strongest one. Traditionally, this event aims to popularize sambo while organizers want to involve in sports as many children as possible.

In turn, most of all children like watching performances of the recognized sambo stars, a large number of whom annually come to Armavir. Each sambo athlete gets an opportunity not only to test their strength in the struggles against strong opponents and present their fans with a performance of the highest level, but to compete for good prizes as well. When the tournament was in its initial phase, the ideological inspirers decided to establish a prize fund, which was to be distributed among the winners.

Besides nice bonuses, sambo tournament for prizes of A. Markaryan differs from other competitions because of its special spirit and unique atmosphere. Vivid and honest fight, fair judging, warm and friendly atmosphere in the hall, the audience who truly love and understand sports - all this makes the competitions a real sambo holiday. It is pleasant that the hosts are trying to show their hospitality in everything.

- There is an unspoken rule in our school that the prizes should leave the town! Even when the fight is equal we always give preference to our guests. Practice has shown that the harder we judge our athletes, the better they begin to perform, - Rudolf Baboyan, President of the Krasnodar regional federation of judo and sambo, Head of Russian Sambo Federation of the South admitted in his interview during the last year tournament. - We have always managed to gather the best fighters on the “single mat”. On the one hand, these sportsmen have more chances to win and they are willing to come to us, on the other hand, we have a great opportunity to show the strongest sambo sportsmen to Armavir sportsmen. During such tournaments young talented sportsmen interact with famous athletes and take an example from the best ones.

As for the current year, among the participants there were representatives of the Russian team Alexander Shaburov and Alexander Sharov, Ukrainian team leaders Dmitry Babiychuk and Ivan Vasilchuk, as well as the strongest athletes from Georgia and Armenia. Yervand Mgdesyan (57 kg.), Aslan Mudranov (62 kg.), David Oganisyan (90 kg.) from Armavir, Yuri Saifutdinov (74 kg.) from Novorossiysk and Beka Imerishvili (68 kg.) from Georgia.

Sergey Eliseev, President of the Russian and European Sambo Federation, Yuri Saprykin, Deputy Head of the Federal Agency for Youth Affairs, Deputies of the Legislative Assembly of the Krasnodar Region, Yuri Kharchenko, Mayor of Armavir have become the honourary guests of the event. In the year of the 75th anniversary of sambo, Russian Sambo Federation awards were presented to Avdey Kastanov, Founder of Sambo in Armavir, Murat Khasanov, eleven-time world sambo champion Murat Khasanov and Khaybullaev Gussein, multiple world and European champion.