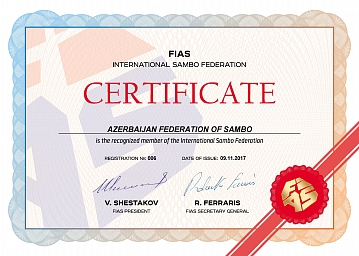 History of Sambo in Azerbaijan

Sambo began to develop in Azerbaijan in the late 1930s. The origins of Sambo are closely associated with the name of the honoured coach and referee, Ismail Akhmedov.

The first nationwide competition in the history of Sambo was held in Baku, 28–29 November 1938. This tournament was attended by five teams representing the cities of Baku, Moscow, Kiev, Leningrad and Saratov, and participants competed in six different weight classes. The founder of Sambo, A. Harlampiev, and famous Sambo theoreticians E. Chumakov and A. Konstantinov, among others, competed in this tournament.

Later, the first national Championship of Azerbaijan was also held in Baku, in March of 1954, along with a special training workshop conducted by E.M. Chumakov. Sabir Huseynov, Alkivarid Pavlidi, Mukhtar Dadashov and Islam Humbatov became the first champions of Azerbaijan at this competition. Sabir Huseynov (weight category: up to 60kg) went on to win silver at the USSR Championship, which was held in the city of Kharkov on 3–8 April of the same year. This victory earned by Sabir Huseynov, who was a professional athlete in four styles of wrestling – Greco-Roman, freestyle, national and Sambo – was a high honour for his country.

After the breakup of the Soviet Union, the independent Republic of Azerbaijan earned significant achievements in Sambo. In 1992, Azerbaijian took 2nd place among adults at the World Cup held in Minsk, Belarus.

The 1997 European Championship was held in Baku from 1 through 4 May. Azerbaijan’s youth team took 1st place and its adult team took 2nd place. Later, Azberbaijan took second place at the 2010 Student World Cup held in Prague.