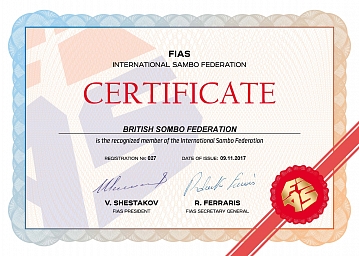 In 1986 Martin Clarke founded the British Sombo Federation. Why and How did this happen?

Martin had competed in Sambo with the British Amateur Wrestling Association in the early 1970’s in those days it was refereed to as either Cambo or Sombo, the word Sambo was considered racist by the powers that be. Using the C instead of the S was because in the Russian Alphabet the S sound was written as a C as for Sombo some maintained this was the correct spelling in reality the only spelling was Sambo. With the Sport moving to Olympic Games recognition, the FIAS directed all member countries to use just word which is Sambo. The BSF have been advised that the use of the name SAMBO could affect our recognition as governing body for the Sport. SAMBO is considered a highly racist and derogatory term in the English language, Government and National bodies could distance themselves from such an organisation that uses that form of terminology. The British Sombo Federation was formed in 1986 and was content in using the name SOMBO.

We were asked to stop using SOMBO by the International Body FIAS as it was not the International known name for the Sport which was SAMBO.Most people in the UK and other English speaking countries know Russian Sambo as Sombo so we have no problem in returning to the name SOMBO, in the past year we have used both names this will cease. It has never been our intention to be offensive to anyone but we must consider our membership. Clubs using the word Sambo cannot be accepted into the BSF the Word SOMBO must be used.

Hopefully our membership to the International Body will not be affected.In 1977 Martin tried for the Judo Moscow Olympics you can read the full story by reading his book “Martin for Moscow” which is also on the net. With his unsuccessful bid Martian tried other Combat Sports and in 1984 he participated in the 1st World Jiu Jitsu Championships in Canada where he won Silver. On his return journey he picked up an old copy of the Daily Telegraph where he saw an article about the “World Games” which was to be held in London in 1985.

The World Games is basically an organisation which accepts all the non Olympic Sports one being Sambo. On his return he contacted the British Amateur Wrestling Association and asked to be considered for the British Team only to be told GB would not be entering a team. Couple of days later the Chairman of BAWA Bert Jacobs contacted Martin and asked him to organise a team and he was made Chairman of the BAWA Sombo Committee.Martin first job was to find out about the rules as the last time he fought there were no ground holds and the scoring was a mixture of Sombo and Free Style Wrestling, for this he contacted Josh Henson USA who came over and gave a seminar. The rules had returned to Sombo Tradition scores for throws, leg locks and arm locks, all the freestyle rules have been removed with the only concession to the Free Style fraternity was the inclusion of ground holds. Some months later a trial was held at his club at Sittingbourne and a team selected, the British Team at the World Games won Gold, Silver, 4 bronzes, referees Alan Kontozi and Brenda Jones were awarded International Level 3 status. Martin had not only been successful as a World Silver medallist but also managed a very successful team.In the October Martin along with Tony Bull and Trevor Roberts competed in the World Championship in San Sebastian Spain, Martin could only manage a 5th place but in later years would eventual win another two World Silver and a European Bronze. As the team was part of the BAWA they were obliged to pay all expenses for this trip and this was the main reason why eventually the British Sombo Federation was formed. Martin was summoned to BAWA HQ and Bert Jacobs said the BAWA did not have the funds to support Sombo and would I be prepared to start a separate organisation we his blessing this he agreed to.

In early 1986 an inaugural meeting was called to form the British Sombo Federation a constitution was agreed upon and a committee was formed which consisted of:Chairman Martin Clarke Vice Chairman Alan Kontozi Secretary/Treasurer Brenda Jones Committee Members Valerie Clarke Dave BouldingThe BSF went on organise British and regional championships as well as taking teams to world and European championships and in 1990 the Sports Council recognised the BSF as the Governing for Sombo/Sambo in GB. Martin went on serve as Treasurer of the international Organisation FIAS, was awarded a Grand master of Sambo the only person in GB ever to receive the award ,in the last few years was presented with a Gold medal for Services to International Sambo and was also awarded a Star of Sambo this given to him while at the World Championships in St Petersburg 2008 this was awarded to the top 10 most influential people in World Sambo. Brenda Jones sadly no longer with us became the first Women Exceptional Referee the highest position for a referee; she refereed all over the World. In 1989 BSF organised the European Sambo Champions and 1992 they organised the World Championships both held in Herne Bay.Times move on and the British Sombo Federation is represented by the following organisation which have affiliated in 2012 English Sombo Federation, British CombatSombo Association, GrapplingUk (Sombo), Federation of Russian Martial Arts (Sambo) Scottish Sombo Federation, Red Star Sambo and Northern Ireland Sombo Federation.