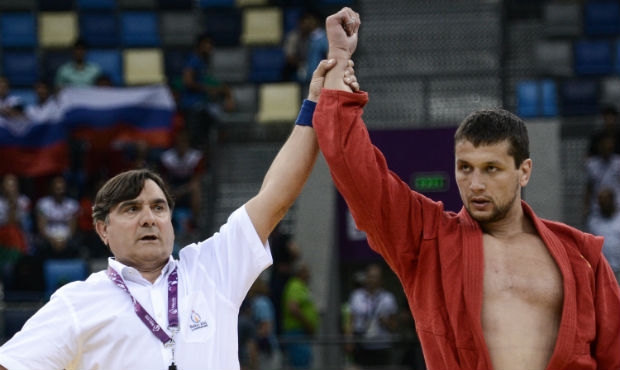 He really looks like an epic Russian warrior. Three-time world champion and European champion wins over everyone in the weight category of over one hundred kilograms. That’s a whole hundredweight! And still he looks like a slender but very powerful, well coping with such a difficult process of getting used to life handsome epic hero. Artem, as is typical for many powerful people, isn’t particularly inclined to giving interviews. Yet he answered a few questions after the first in history European Games in Baku where he became a gold medalist.

- It is said that at the championship of Russia all members of the national team have a much more difficult time than at the world championship.

- These stories are out of date. You can’t imagine the blast that’s happening in the international sambo right now. You can’t know where and when a new rival will show up to surprise you! We have to always be alert. And this old song about how only Russian sambists win the tournaments isn’t true. Everybody has seen how athletes who have nothing to do with the CIS have fought at the Games.

- What advice would you give to young athletes? How to become another Artem Osipenko?

- I would advise them to fall into the hands of a good coach. I was lucky here. It was my coach who made me take an interest in sambo. And I learned with him reaching out to the champions.

- You probably spend all your free time in the gym, working out and lifting barbells?

- But of course not! If I have some free time, and I go hunting or fishing. And then I disconnect from everything. Even from sambo.

- And what’s the hunter’s dream?

- The dream is to compete for Olympic gold. I think that we could have given sambo to the world as our product yet in 1980 when the Olympics took place in Moscow. But something went wrong.

- Do you know exactly what it was?

- No. And it’s in the past. And now we will strive to realize ourselves at the world market. Baku became one of the stages of this process. Now a lot depends on how we were understood by the audience, sports leaders. I hope that after the Games in Baku sambo will be spoken about more.

- And how's your professional career? You’re a lieutenant, is that correct?

- I’m already a captain of the traffic service, to cut a long story short.

- And your colleagues, are they understanding of your hobby? Do you plan to give it up in the future?

- It’s too early, my age doesn’t allow that. I still have a lot to fight for.

Based on the materials of "Rossiyskaya Gazeta".