World Sambo Championship among Masters in Greece: results of the first day of competition 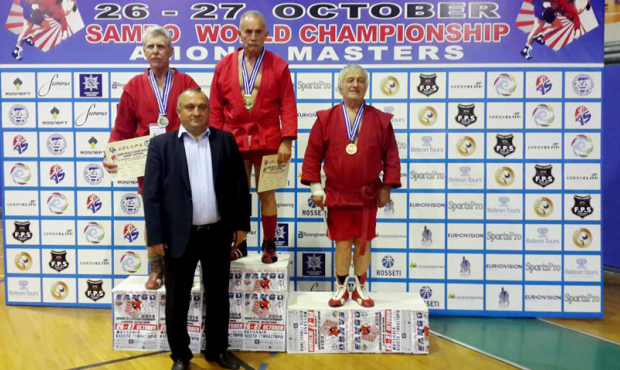 The World Sambo Championship among Masters, which started today in a suburb of the Greek city of Thessaloniki in the Klisto Gymnasium sports complex, gathered 250 samboists from 19 countries. Athletes between the ages of 35 to 65 and older were divided into 7 age groups, as is usual in masters sambo. The oldest competitor this year was the Georgian Zaur Sakhuadze. He was born 3 years before the birth of sambo in 1935, so today he is 79 years old. Read about the winners of the first day of the sambo masters competition in today’s report.

The first medal went to the Greeks, the organizers of the tournament. Duru Gogua won on the starting day of the tournament in the 74 kg category for men aged 40–44 years. After the final battle, when he won a beautiful and skilful victory over the Russian Roman Tikhonov, he said: “I’m incredibly happy, but I also realized that I need to train more. Since I’m the coach, I’m in the gym every day, but time and effort in itself often isn’t enough. I give more to my students and I only spend an hour a day on myself. Now I know this isn’t enough. Of course, the win today was for my country, friends and fans. But more than that, it’s a challenge for my students. Especially for one of them — the world sambo champion Elizabeth Telsidu.”

The French team also celebrated their “gold” today. Sylvain Rouyer, who competed in the 68 kg category for men aged 35–39, added another gold medal to this sambo team’s collection today. He ascended the Greek podium together with his son and daughter. “My children are with me today. They came to support me, and I’m very happy that I was able to give them joy and pride in their father. And of course, this is a victory for them. The final turned out to be hard, and I won by only 2:1. There was a moment in the fight when I was losing, but my will and my family’s support kept me going. I’m happy, and I want to enter next year’s competition in Israel,” Sylvain said in commenting on his victory.

Samboists from Kazakhstan, Tajikistan, Ukraine, Georgia, Russia and the United States also won gold medals today. Of course, the spectators “gave” the greatest support to the most famous sambo master of all, Aslambek Aslakhanov. During his final bout, which earned him the title of 9-time world sambo champion among masters, the crowd in the stadium kept chanting "Aslambek! Aslambek!” Two hits to the back with the knees “lit up” the board with a score of 3:2, making Aslakhanov the winner. He had this to say about his motivation to perform at these competitions: “My main motivation is to set an example for my children. You have to be in good shape, and a man must be able to protect his friends, the weak, his family and his Homeland. Sambo meets all these requirements.” Aslakhanov’s response to questions about the veteran’s movement was as follows: “Each battle of the masters deserves to be broadcast on TV. It’s so beautiful, such an example of courage and will, heroism and patriotism. Real men may be bald and gray, but they fight just like the last time.”

Results of the first day of the World Sambo Championship among Masters in Greece: